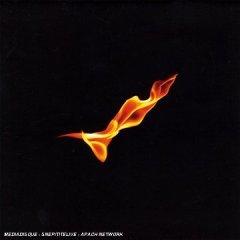 First thing’s first. Congratulations to Turin Brakes for the standard of artwork for their recently released ‘Dark on Fire’ album. A glossy black sleeve with understated yet bright red graphics houses this album. Only necessary lettering to inform us of the band and LP title accompany it. The sleeves inner is alive with flame and houses a jet black disc (like you get with Playstation). Simply stunning packaging and I can only hope the commercial release is half as sleek. So, what’s the music like?

From the off it sounds every bit a New Order LP, before the guitar interrupts the synth’ then comes the instantly recognisable and distinct vocal that gives the game away. Turin Brakes are back and they’re somewhat suitably on fire.

Some over emphasised keywords throughout ‘Last Chance’ stick and jar as they fall down the unsuspecting ear hole. Great start.

‘Ghost’ is a stylish groove driven track that could quite easily pass for Supergrass on downers, though it keeps the album moving. There’s even a subtle hint of ‘Billie Jean’ hiding behind the overstretched vocals.

Luring us in next with a wide open track with heartfelt lyrics and sentiment to boot, this is surely the LPs opening attention grabber to remind us just how ace Turin B can be. There’s a sullen desperation throughout this track that underpins the sound, thankfully doing so without making itself obvious. ‘Something in my eye’ kick starts the LP.

Turin Brakes are taking flight. ‘Stalker’, thie single, follows. Upbeat drums and searing guitars accompany the urgent vocal to deliver another great track that echoes the sinister ‘Every Breath you take’. This is of course less depressing and repugnant. Phew!

James have taken over the studio surely. I know this was a single but come on! ‘Other side’ simply smacks of ‘Someone’s got it in for me’ off their Millionaires LP, with its sentiment, vocal delivery and structure. Apart from that, I suppose the two are entirely different.

A fresh acoustic intro leading to an equally crisp and escalating vocal and synth’ is the construct of the title track ‘Dark on Fire’. The passionate vocal really stands out on this sublime track. Reminiscent of a Starsailor flipside (possibly Grandmas hands, please let me know if you find out, it’s bugging me.)

Back to Supergrass territory with ‘Real Life’, that seemingly begs to soar into the ever after but goes unanswered and stays grounded with the standard TB depth and heaviness restraining it. Closes so abruptly you hardly notice.

‘For the Fire’ is the standout track for me. It’s got an individuality and separate own sense of self that simply accentuates the glory of Turin Brakes. Picking up subtle but all important drive here and there as it goes along its sweet sweet way, this song with its sublime solos is a sure highlight.

‘Timewaster’ has a cheeky hint of Inspiral Carpets that keeps sticking its nose in amidst the predictable and all been done before structure of what is otherwise a great song.

Plucky little fellow is ‘Bye Pod’. This is exquisite from the outset. Plucking and strumming in perfectly appropriate strength create a finely crafted backdrop for the eventual addition of drum s and bass. Great track to wake up to, to stagger around the bedroom to and to muffle the sounds of your screaming sleepy self after that bloody door jumps out and traps your toe again.

TB close with a fragile song that barely upholds the little momentum it manages to sneakily gather. No bold statement is made before its timid and subtle demise. ‘New Star’ eases us back down into the here and now we left behind at the start of this great album that features classics, ditty’s, jams but sadly most notably, a whole lot of copycatting.

Intentional or otherwise, it makes no difference because the sheer amount of comparability on this LP instantly distracts the ear from numerous songs that are excellent in their own right. Turin Fakes, maybe just a little, but I can’t, no, I won’t hold it against them. They’re still the same good old boys who brought us ‘Underdog’ and ‘Painkiller’ all those years ago, so any doubters out there just step off.