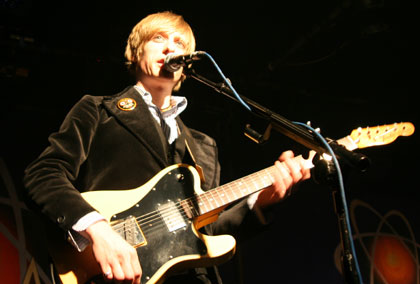 Kula Shaker are back. Here at the Rescue Rooms the scene is finally set, after an initial rescheduled date, a delightful mural of one of her majesty’s finest depicted giving hand signals looks on down from above the bar at the unfolding mayhem of a restless capacity crowd. Pop Will Eat Itself tracksuit top wearing people peruse the bands paraphernalia, as do the grey haired freaksters who’re also here tonight.

Replacing the support band Lois who did a great job of warming the crowd, Kula Shaker take to the stage as the fervour escalates all around. Sounding like The Who and The Doors covering Blind Melon’s ‘No Rain’, the opener gets the first two rows bouncing and attracts applause that doesn’t really reflect the truly electric vibe in the air.

After Crispian Mills rattles on for quite a bit longer than necessary with his useless information (bar the fact that we’ve got Harry on organ who’s proving his competence tonight I must add), a song about life through the looking glass (ooohh) stirs little interest and is over almost as quickly as it began.

‘Paul on drums’… Thanks for that Crispin! We’re at track five now and it’s still just the two front rows getting into it. Is the beer too cheap? Is everyone at the bar when they should be dancing? A definite ‘no’ on both fronts I’m afraid. The overpriced beer is too precious to hold and the lacklustre songs just can’t hold their audience.

Fans chat amongst themselves as we finally get an apology for the cancellation (though KS fail to recall the evidently selfish reason) and an acoustic track that was, as many life changing songs are, written in the shower; a trick I’ve tried but the paper gets all wet. With a barrage of cheering following its close, the possibility that this might be the track to finally engage the crowd is something that we just can’t ignore.

Upon my return from the bar KS return to their old stuff, as they may or may not have done already and entice at least another row of people to dance along as they do. By the songs close, 40% of the crowd is moving in some fashion, clearly digging the music a whole lot more openly. They’re not all ecstatic but hey, whatcha gonna do? More apologies follow, this time for the admittedly below par delivery of some of their songs that have only been played for the first time tonight.

It seems that KS are happy to just go through the motions and might actually be enjoying their show more than the crowd. The bar next door have got Clap your Hands say Yeah on the jukebox and I’m honestly jealous as I re-enter the gig with my freshly acquired pint. KS have stepped it up and half the crowd is waving its hands in the air. ‘Isn’t Paul having a good show tonight’ CM rhetorically asks.

Is it a clever combination of 4 songs or a cheap stunt combining 4 not too dissimilar songs? I don’t know but it admittedly sounds great! Wah guitar, drums, bass and even more drums all adding to a reinforced and ever charging performance, redeeming the KS name. Smugly singing with his head lopsided to see the more receptive crowd from beyond his fashionable fringe, CM and his band go into overdrive and the lid slowly begins to lift off the whole room. They’re at it again and have a got an appreciative mob grooving their socks off!

Closing with ‘Govinda’ to riskily take the mood down a little, it’s a move that works and engages everyone here tonight as KS go out sounding like The Bluetones with a slight hint of their mentors The Charlatans. Their less energetic anthem unites each and every one of us and please, make no mistake; this is Kula Shaker closing a rollercoaster ride of a set that left them riding high in the minds of all who bore witness to their return, right? I must endeavour to find out the truth…

Instinctively I track down (Claire Marks and Steph Wellbourn) two lovely looking yet notably despondent lady fans who tell me that KS are ’still a good live band, but their new stuff needs livening up a bit. They need to go back to their roots more’. The guys at the T shirt stand have shifted about 20 shirts tonight and after speaking to one of their punters, I come to realise that KS should be just fine. ‘Awesome, wicked. I saw ‘em ages ago supporting… someone and I got into ‘em then, but tonight they were wicked’. I can’t imagine that he speaks for everyone here tonight, but his words bring some indication of the saleability of their new LP (released in August) and hot cakes spring to mind!