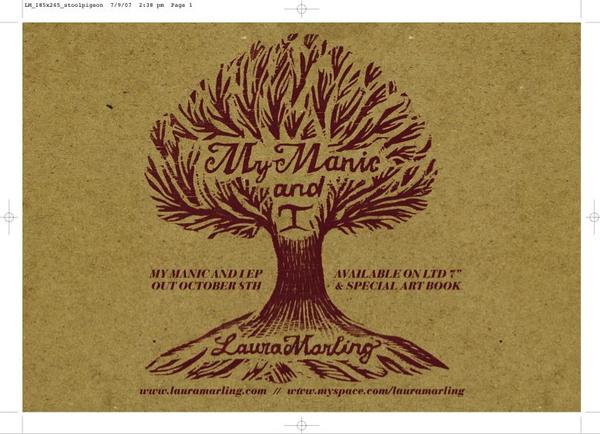 Laura Marling – My Manic & I

The escalating interest in the escalating sounds of quirky songstresses is unquestionable. This new wave of interest may have all started with Regina Spektor, it may not. Now, with the likes of Feist and newcomer Laura Marling (LM) getting in on the game, I’m worried that the quality and romance of it all will be lost. So let’s see what LM brings to the arena in her new three track E.P. ‘My Manic & I’.

Yeah she might be just another Spektor but within her individuality she gratifyingly holds the essence of a certain Suzanne Vega. Her clever and sometimes naughty lyrics are accompanied solely by a basic acoustic guitar as LM does her lovable lady bit on opening track ‘New Romantic’, a bittersweet tale of the half taken chances and fleeting feelings of a flipped out, Bryan Adams loving female and her many empathetic subjects of desire. It’s perhaps a little too whimsical and by mid-way LM has lost any momentum along with her audience, as this non engaging song closes. I imagine it to be far more effective in an intimate live setting though, so I’m not completely dismissing her just yet!

A subtle underpinning drone and some simple strings add to ‘Night Terror’ the second track. The darker subject matter takes the soft edge off and her newly strengthened and form finding sound is far more enjoyable. It’s getting better all the time!

Title track ‘My Manic & I’ follows, with its backing / multi layered vocal arrangement going a long way to add dimension and depth to a song that really shines, thanks again to its Vega echoes which are louder here than they were previously.

The acoustic piano track ‘Typical’ shows LMs diversity and musicianship, seemingly a must to stand out amidst the many rising similar acts these days. More swear words too, showing her crazy all out attitude that she suppresses so well! This track closes far too soon and only begins to get going just before it stops. Typical!

Ultimately, it might be a bit pretentious and smack just a little of Vonda Shepherd (Ally McBeal singer). It’s refreshingly unpredictable but not in any clever sense of the word. Instead of being cunningly composed it’s more confusingly constructed, with little idea of where it might end up itself! LM offers us a reprise from over exposure and the endless listening to any of her contemporaries and for that we can thank her. She should be at the top of her game within the year though!