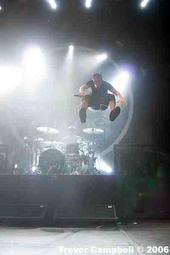 Story Of The Year – Manchester Academy 2

The superb British transport system’s reputation lived up to it’s reputation, and I accidentally missed the first support, however when I made it into the academy it was fairly empty anyway, giving me the impression they weren’t brilliant, that, or they were so great everyone needed to go for refreshments before the next band.

The Blackout, looking like an 80s nu-metal band opened with a screamy, dancy number, and to be fair, the charisma of this band started to over take their talent at this point. With a poncy peroxide blonde and a pretty blue eyed front man, this band are already one of the emo girl’s dreams. They have some great lyrics, and played a really good set, the sound was good and they were very tight, but it was nothing extraordinary.

Story of The Year however, were the opposite; a spectacular array of songs from all albums and the tightest set to ever have graced Academy 2. They pleased the crowd with synchronised jumping, spinning and general choreography and everyone seemed pleased with the songs being played. Following a joke about playing “sweet home Alabama”, they proceeded to play a medley of covers, most of which appear on one release of Guitar Hero or another. Starting with Guns ‘n’ Roses “Paradise City” and ending with Van Halen, dotted with Rhianna’s “Umbrella”, it was something that tickled every member of the crowd.

The hair cuts belonged to the 80s, but they performance was one of a lifetime. Back flips and throwing guitars across the stage, and general stage acrobatics helped prove a point that with another new album, Story Of The Year are still well and truly involved!