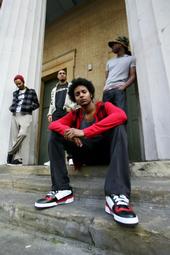 The Thirst – My Everything

The Thirst are currently creating a bit of a buzz on the live circuit, having been championed by none other than Rolling Stone Ronnie Wood. Wood signed them to his label Wooden Records after seeing them in Putney and reportedly being ‘blown away’ by their performance.

Trouble is, whilst the band are undoubtedly a tight and accomplished unit, there’s nothing particularly outstanding about new single My Everything. It’s half Arctic Monkeys bandwagon and half bad Jam tribute act, with the current success of the former perhaps outweighing the more measured influence of the latter while The Thirst were defining their own sound . My Everything suffers from an identity crisis as a result, and sounds rushed to boot.

It’s not all bad though – the lyrics are clever, the playing is sharp – and there’s just enough potential to suggest that this band could yet be one to watch if they manage to find their own voice.