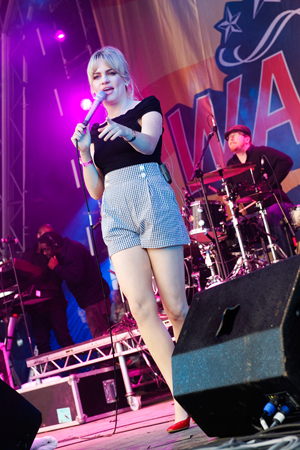 Having not attended last years cancelled mud fest the omens were less than enticing as the heavens again open on this the opening day. The first striking thing about the Wakestock festival is how much it has grown and transformed over the last few years. As festivals close with every passing week it’s beyond impressive to witness the superb growth of the festival in terms of its scale, the quality of the performers and the look of the actual site, with S4C/C4 in attendance it will look quite marvellous for those sat at home. As for the entertainment on the first day I make it a point to catch Hadouken’s set as I’ve always assumed they would be utter shit live and they do not disappoint with their nu-rave rubbish and utter lack of talent proving almost impossible to endure. Headliners Groove Armada bring an edge of true class and experience to the gathering, having seen and done it all over a superb career. They bring out the hits for the gathered masses which include both their more upscale dance numbers coupled with the ambient chill-out tunes they have pioneered for the past decade.

Day 2 and the weather perks up a tad, but no matter as this evening will see the only true legendary outfit on the bill. Since the acid house days in baggy Manchester the Mondays have been almost a myth like creature that refuses to die and finally they are in North Wales to drop an acid infused bomb on the unsuspecting locals. Their set is outstanding both in terms of its shambolic brilliance matched only by their total and utter lack of giving a shit. Sadly the night is slightly marred by them being followed by Mark Ronson who is as unbearable as a very nasty STD. He prances about the stage in his little Ray Davies suit strumming his guitar showing off his remoulding of modern classics, which does leave us with the question, who cares?

The Sunday arrives and the festival enters unknown territory as its first third day kicks off and once again the weather is compliant unlike 12 months ago. Today is all about one thing and that is the much touted return home of 2008 musical juggernaut Duffy to her roots. Talk around the field is that she has decided not to bother as she is now ‘too big’ for this kind of event. I take little notice of this as those who are spreading the story have taken god knows how many illegal drugs in the past 48 hours coupled with a disgraceful amount of alcohol making me think that they’re most probably full of shit. Come the early evening and I’m proved right as the girl herself comes out on stage wearing her now trademark not hot pants. She gives a good account herself with a performance that re-assures us that she hasn’t found crack cocaine unlike the person she is supposed to replace as the new voice from yesteryear. The Streets close the festival and are as underwhelming as usual, primary due to Mike Skinner’s epic ego almost forcing the stage to collapse under the weight of his own bullshit. As I drive away fro the festival the rain begins and I’m reminded that not drinking isn’t a bad thing at all. All I can hope now is that Radio 1 uber-asshole Zane Low how drowned somewhere on sight in a combination of good old Welsh mud combined with the never-ending amount of crap he talks, roll on 2009.