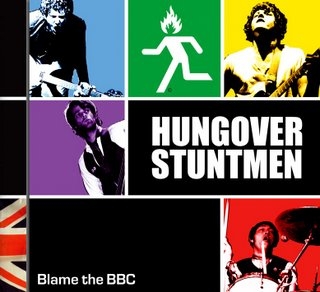 With endorsements from some of rock music’s colossal figureheads from the modfather (who notoriously joined them on stage) and The Who’s Roger Daltrey, one, from experience, needs to approach this album very cautiously.

Blessings from the musical hierarchy, though they can do little harm when it comes to record sales, are seldom worth going off alone. Noel Gallagher with his , bridging on ridiculous claims about hurricane #1 and Pete Doherty swearing his artistic allegiance to the ear bleeding epidemic disaster that are The Others are only two examples of the detachment great musicians can have with the people, and it is of course the people, for whom rock music exists.

Luckily for Hungover Stuntmen these pledges don’t go completely unjustified. It makes a lot of sense that Weller enjoys the band because both theme and sound reflect the gritty and quintessentially English gems he provided us with in the 80’s.

Thematically the Hungover Stuntmen are similar to The Cribs. Lyrics are awash with post-modern kitchen sink references to northern England from buses to the BBC. The difference is in the delivery. Where The Cribs often venomous assaults upon the British indie scene attacks with ferocious, sarcastic brilliance the Hungover Stuntmen take a more subtle approach by actually questioning the existence of indie as a scene. A kind of parody and pastiche element to the content which gives you the impression they’d like to distance themselves from a decaying, generic style of rock music. I don’t think they should have much difficulty.

The band have a raw sound reminiscent of The Jam, The Who and ‘Blame the BBC’ is bursting with nostalgia for the deteriating British reign of rock n roll. The terrific ‘Ballad of the Hungover Stuntmen’ sounds not unlike a beefed up version of Squeezes ‘up the junction’ while other tunes that shine are ‘love is suicide’ and ‘one reason’ both have presence and could become indie classics.

They partly owe their tight, polished; vintage sound to Andy Taylor’s (Duran Duran) production and the pairing have gelled well to create a reputable debut record.