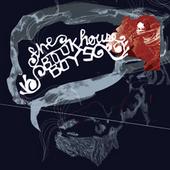 When The Bookhouse Boys released the stunning single ‘Dead’ earlier this year, they made people sit up and take notice. Only one question remained, and that was whether they could sustain their class over the course of a full album. The answer is a resounding yes.

Taking their name from a secret society on David Lynch’s show Twin Peaks, this nine-piece produces a sound so epic in scope that it puts the likes of Muse to shame. If Lynch directed a western, he could only dream of a soundtrack like this: a fusion of Americana and gothic soundscapes topped off with haunting vocals from Paul van Oestren and Catherine Turner. Where do they hail from, I hear you ask. The American Midwest? Somewhere in America, surely? Well no, actually. They are from London.

When you compare bands to film directors rather than other musicians, it becomes clear how cinematic their music is. Even the tracks which lack the immediacy of some of their counterparts, such as the brooding ‘Luca the Brave’, would not seem out of place on the soundtrack to films like ‘No Country for Old Men.’ Many bands might be dismissed as arrogant when listing the likes of Lynch and Ennio Morricone as their main influences, but not this lot.

‘Shoot You Down’ is the pivotal track on the album, with the boy-girl vocal combination telling a moving story which engrosses the listener even without them noticing and leaves a lasting impression. The same can be said of ‘The Valley’, a track which complemented ‘Dead’ superbly when used as the b-side on its single release, yet becomes even more powerful in the context of the album.

There is hardly a weak track on the album, although the band does misfire slightly on ‘I Can’t Help Myself’, a confused effort which is saved somewhat by van Oestren’s vocals. Still, the beauty of this album is the depth of quality offerings, and the rousing finale of ‘Yer Blue’ and the disjointed and borderline disturbing gothic instrumentation of closer ‘I Believe’ ensure that The Bookhouse Boys end on a high.
This may not quite be the best album released this year, but it is mighty close, and I can assure you that you will hear nothing else like it.