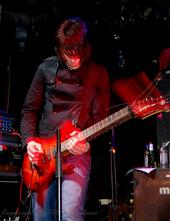 Being the first act is always a testing time as the venue hasn’t filled out yet and people haven’t made their way into the stage area, however it seems tonight that the crowd doesn’t want to miss anything from their gig experience.

The audience is reasonably sized and Exit Calm begin their set abruptly without any introduction. An alarm sound fills the Scala, then it suddenly goes quiet and dense whirring guitars commence. The sound is very psychedelic and intense, which makes the crowd really intently listen. The lead, Nicky Smith, seems to be quite awkward and uneasy to begin with, as there is a long instrumental opener and he doesn’t really know where to place himself throughout this. Once he has his role to do, Smith is more at ease and gets into the rock mood and starts to perform. Stooping low, clutching the mic and bouncing in time with the music, he makes the stage his own.

Their songs are long and excellently orchestrated, with the most addictive beat, but at times it seems the group’s sound would be better if Smith didn’t sing. There’s no doubt that the sound they are producing is incredible, it just feels like his vocals are put there as a filler in places. Also his attitude towards the audience is peculiar. When he sings he has his back to them or is facing side on, rarely directly in front of them. For a large percentage of their performance, he seemed to be glaring at everyone and it was as if he wanted to leave the stage.

Their short thirty minute set really got everyone in the mood for the main act, but maybe next time, when they are supporting, a change in Smith’s demeanor would be greatly appreciated.