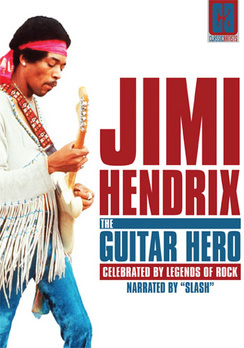 It will have been 40 years since the passing of rock’s most influential and iconic electric guitarist – Jimi Hendrix. In many ways he wrote the book on the electric guitar, leaving behind an encyclopedia of sounds, riffs and styles that guitarists have been mimicking ever since.

THE CLASSIC ARTISTS SERIES would not have a complete series on Rock legends and their mark on the world of music without making this film, the final word, on guitar virtuoso Jimi Hendrix.

THE CLASSIC ARTISTS SERIES is lavishly supported with original music and live performance footage – beginning in the 60s with the incomparable band Cream, followed by The Moody Blues, Yes, Jethro Tull and now Jimi Hendrix

Some of these were his mentors, some were his contemporaries and all admired his incredible talent and many emerged as new talent as a result of his influence. They are all here to explain why Hendrix’s work remains at the zenith of rock music to this day.

Moving beyond the icon and the myth, Classic Artists brings alive the images and music that Jimi Hendrix evoked from his very soul – narrated by Slash (Guns N Roses, Velvet Revolver and solo artist) – this film is less a biography rather it is the first film to focus upon the music itself and the impetus of the master who created it.

The Classic Artists Series is the brainchild of director/producer Jon Brewer. Jon is a long-standing and well respected veteran of the music industry, and prior to his producing feature films and making a major foothold in the burgeoning Video industry in the 1980's, he managed such artists such as “YES”, members of The Rolling Stones, Alvin Lee and 10 Years After, David Bowie, Gene Clark of The Byrds, Gerry Rafferty and Stealers Wheel, and others. Jon also knew Jimi Hendrix and was at his first gigs in London.

The standard DVD will be released on the 7th March 2011

• Photographs and memorabilia
Including a 20 page full colour booklet

This release will be preceded by special one limited edition collectors pack Classic Rock Presents – Jimi Hendrix: The Guitar Hero

Here at Glasswerk we have three copies of these awesome DVD to give away and all you have to do to be in with a chance of winning is email mail with your name, address and answer to this question:

Who is the DVD narrated by?