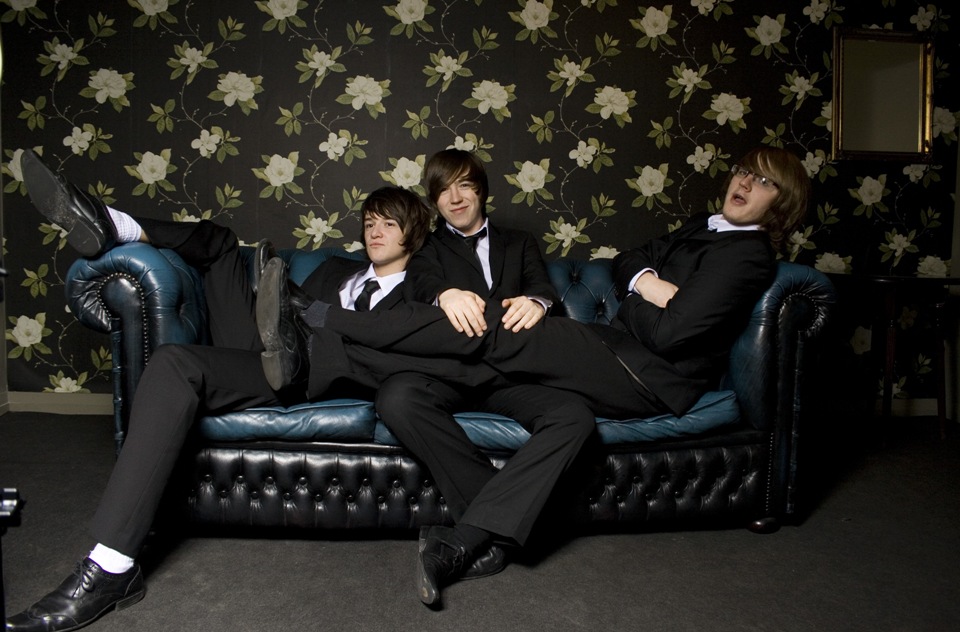 As their new EP ‘The Toronto Tapes’ is readied for release, we chatted with Sam Bell, Conrad Ellis and Jess Whitmore from Cheshire rock three-piece The Targets about growing up, fame and music. What they do is the youthful, genuine response to bands like The Enemy and Brother. There’s no nonsense with The Targets, just guitars and house parties, and it’s been that way since they starting playing together at 13 years old.

Glasswerk: Guys, you’ve been together since you were 13 years old. How the heck have you managed that without killing each other?

[Answering from a hotel rooftop in Canada]

JW: Hard work and dedication. It doesn’t matter if you have a barney with someone, it’s all about the music at the end of the day. If we’ve got a discrepancy we channel it in to the music and write songs about it.

CE: It’s come close a number of times, but in the last few years things have just got tighter and tighter. We’re like a family… We are family!

SB: We have arguments from time to time, but its only because we’re three passionate people who really care about every aspect of what we do. We always come away from those experiences having learnt something more about ourselves and each other.

Glasswerk: Has growing up together had an effect on the music you’re making?

CE: Obviously…Because we’ve been around each other all the time growing up we’ve seen each other change… Good things happen, and bad things too… And we’ve always been there for each other. It’s changed our writing style and the way we work as a band.

JW: Yeah it’s had a big effect, especially on our live show whereby we don’t have to stick to the usual arrangements of songs… We can think on our feet and compensate… If Conrad starts to break it down, Sam and I instantly pick up on it and play softly so that Conrad can talk to the crowd.

SB: Me and Conrad have a scary 6th sense on stage… We just seem to know where each other are at all times so even when we’re going fucking mental we never get in each others ways. Even on small stages.

CE: Almost certainly… As you grow up your influences change, your writing styles change, and the things you care about change and as you mature as a person your songwriting changes with you. If you look at the difference between our first EP and second EP, The Toronto Tapes, you’ll notice that it contains a far wider array of instruments than any of our previous recordings.

SB: The Toronto Tapes really does show a different side to us. It proves that we’re not a one trick pony. We’re not just a three piece rock and roll band. We can all sing, we can play guitar, piano, harmonicas… our songs don’t always have to be loud and fast.

Glasswerk: What do you guys stand for, and what do you want people to take from your music?

CE: Our band stands for hard work, passion, heart, soul and determination. We are a prime example of following your dream and doing what you want to do. We’re three lads from a small town and we never thought we’d end up playing our music to fans on the other side of the world.

SB: I think people can really connect with our music as we sing about situations, thoughts and feelings that everyone can relate too.

Glasswerk: So, one of you was in Nowhere Boy playing George Harrison. Has that given one of you a bit more status in the band? Do you worry people will see you as “the band with the guy out of Nowhere Boy” in it?

Glasswerk: What new music are you loving, and of course you must tell us why.

CE: Really digging the new Beady Eye album right now… Foo Fighters are getting stronger and stronger… I’m loving Kings of Leon and I just can’t wait for a new Kasabian album. However on the new music scene I quite like what I’ve heard from 2 Door Cinema Club.

Glasswerk: Let’s get deconstructive. What music are you very much not enjoying right now, and playing the role of the devil here, again you must tell us why.

JW: Justin Bieber on the cover of Rolling Stones magazine was a f*cking joke man!

CE: Who the fuck are Brother…

SB: They’re not my f*cking brother!

Glasswerk: What does the future hold for The Targets?

CE: We’re just gonna keep playing our live shows, putting records out, playing around the UK, going back over to the states for our fourth time, and hopefully do some Eastern dates in the near future. But what I’d really like to do is play around Europe before the year is out.

SB: We’ll keep doing what we love to do as long as we can keep doing it.

JW: Festivals… Hopefully lots of them in 2012… That’s if the world doesn’t end!

Glasswerk: And on that apocalyptic note. The Toronto Tapes is available from April 11th via Liverpool indie label Project Sounds. The band also have a show at Camden ’s Barfly venue on Saturday April 9th.