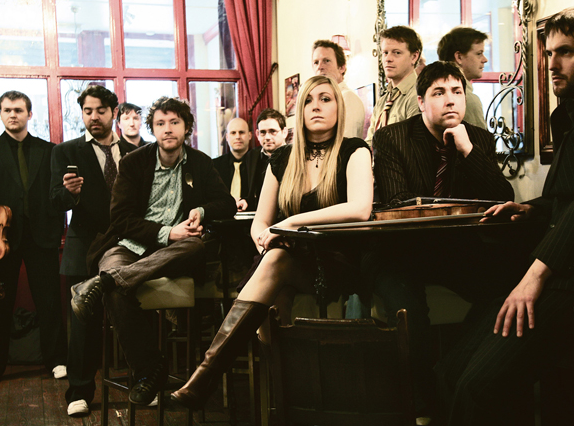 Bellowhead Gear Up For Festival Season

Who is your 'must see' performance at Latitude this year? Os Mutantes for sure – I've been a fan since I bought one of their CDs on spec years ago after seeing its crazy psychedelic cover twinkling out at me from a sea of worthy world music records.

Not including items used in your performance, what is your 'must-have' festival item? A bottle opener, preferably with wine/beer dual functionality.

Do you have anything special planned for your performance at Latitude? Oh yes – far too much in fact. We're a collective so we debate all this kind of stuff endlessly and usually end up not deciding anything. At least for Latitude we've started the debate nice and early.

If you could have anyone (dead or alive) to introduce you onstage who would it be (and why)? Klaus Kinski, just back from playing Lope de Aguirre in the Amazon – angry and drunk, with a beautiful woman on his arm and a monkey on his shoulder.

If you have been to Latitude before what was your favourite memory, performance or special spot on site? We've never yet been to Latitude, but we're keen on Tim Hunkin's crazy machines at Southwold Pier – does that count?

Latitude is… …far too exciting to talk about in an articulate manner.

More information about this year's Latitude Festival can be found by following this link.