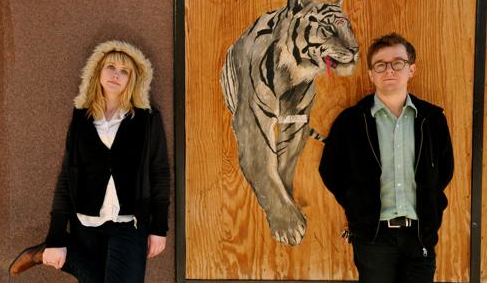 Glasswerk: You’ve named your band after the state tree of Maryland – would you say you’re particularly ‘state-riotic’?
Jenn Wasner: That’s a nice word. I like it. State-riotic – yes, we are very state-riotic.
Andy Stack: We are historically. Although we’re spending less and less time there these days.
Jenn: Yes, it’s that thing where absence really does make the heart grow fonder. I think that if I didn’t get to travel and see other places I wouldn’t be so fond. But as far as the people who are there and the music that’s being made, it’s one of my favourite places in the whole wide world.

Glasswerk: Do you think the fact that you’re from Baltimore contributes to how you guys sound, or what you are as a band? Is it a defining thing?
Jenn: Well, the music that is being made there is definitely influential. I saw a lot of shows when I was younger, and there are a lot of bands, a lot of friends, there making music. There’s an attitude – a spirit of creativity for creativity’s sake, and people go about their business with a kind of joy and not giving a fuck that it's inspiring and beautiful.

Glasswerk: There do seem to be quite a lot of bands emerging from Baltimore. Do you think there is such a thing as a Baltimore scene or is that just lazy journalism?
Jenn: There’s very much a scene.
Andy: I think it’s both of those. There is a scene, but we have always had people saying ‘Oh, they’re just like Beach House’ [also from Baltimore] and that’s the lazy thing.
Jenn: We are a boy/girl duo, but I think our music is very different.
Andy: That’s what I’m saying. People gravitate towards that comparison because…
Jenn: …it’s all too easy. But Baltimore is a scene. People are very close-knit and there’s a lot of collaboration.

Glasswerk: So who have you been collaborating with?
Jenn: Well, I just sang on the new Future Islands record, they’re a great Baltimore band. And our producer on “Civilian”, Chris [Freeland], is in a band called Oxes. Then there’s Celebration… Whoever I possibly can really. There are so many amazing bands and amazing artists doing their thing in Baltimore right now.

Glasswerk: You guys recorded your first album [“If Children”] at home yourselves didn’t you?
Andy: We’ve recorded parts of everything at home. That’s how it’s always been, we’re pretty hands on. With the latest record, “Civilian”, that was the most we’ve handed over control to other people – it was specifically to John Congleton, who did the mix, which we were all the better for doing. But we did the majority of the overdubs, and tinkering all the weirdness that ties the stuff together. That’s just how we like it, because as a band the arrangements that end up on the record are not fully fleshed out when we start recording.
Jenn: We need that creative space – when you’re in a studio, you’re on the clock – you’re on someone else’s time and your money.
Andy: So at home it’ll be like, ‘let’s try 10 different ways to make this bass part’.
Jenn: Which we have to do, because we don’t know what the arrangements are before we go into the studio. And we have had experiences where we really haven’t had the time, the space or money to experiment and dick around. That’s an important part of our writing process because we can’t really hear how all that stuff stacks up until we hear it recorded.

Glasswerk: So it that how your process works? Starting off with the bare bones of something and filling it in as you go along?
Andy: Yeah. As we’ve played over the years we’ve started more and more having an idea of what’s going to come together – just because we’ve played together so much and, you know, we’ll have live arrangements and be working with them.

Glasswerk: How do you keep it so fresh then, if you’ve been playing for so long together and you’re following a similar sort of process every time?
Jenn: I think it’s just the songs. It depends on the batch of songs that we’re working with. I think both of us are willing to pretty much inhabit any particular sound or style or genre if we feel like it is appropriate for the song.
Andy: And also in the last few years I think our tastes have been gradually changing a little bit. Our aspirations for the kinds of sounds that we want – songs we want – as a band have been shifting and becoming a bit more broad.
Jenn: We still know how to communicate with each other really effectively as far as what we want out of each other, because we have a really well developed musical vocabulary from 10 years of playing together. Sometimes we butt heads but I think it’s probably a healthy, good thing to do.
Andy: Our healthy musical vocabulary is ‘don’t do it that way, do it this way’.
Jenn: We’re really past where we take anything personally because that ship has sailed… Sometimes working with other people you have to be more diplomatic and deal with egos, but with us it’s just like, ‘No, fuck that, let’s try this’, and we go back and forth.

Glasswerk: You mentioned the Beach House comparison. Is there a band that you would you be happy to be compared with? Or is it just annoying being compared with people?
Jenn: I just think generally speaking bands don’t love being compared with other bands because – well for obvious reasons…
Andy: You know, the coolest thing was when we played an anniversary show in New York for the book “Our band could be your life” by Michael Azerrad. It was a book about mid-80s indie and punk culture, and it profiled bands like Dinosaur Jr, Sonic Youth and Minuteman… We played in this show, and Michael gave a speech there, and he basically said all the bands that were playing in the show were there because they worked under the same ethos as those bands – doing things their way and not compromising what they wanted from their music. That’s the most complimentary thing that anyone could say – being compared to those bands on that level is incredibly flattering.

Glasswerk: But do you find now that you are signed with a label that you are having to make compromises?
Jenn: We’re fortunate that both of our labels, in the States and in Europe, are really artist-friendly –artist-started in some cases. They’re like the benchmark for that style of record label, which a lot of people say is why they’re still around. They understand to let the artists do what they do best. They take care of the business side of things but they don’t feel like they know best in every kind of situation. Merge in the States and City Slang over here are sister labels and they work with a lot of the same bands. They’re not going to tell us what they think is best – they’re going to give us the pros and cons and then the decision in almost every instance is ours.

Glasswerk: Do you think that’s where it’s going music-wise?
Jenn: I certainly hope so. At this point bands don’t need it record labels and I think labels are starting to realise that. As a label you have to make yourself valuable to the band. If you are a dick, if you are controlling and if you force bands to do things they don’t want to do, then eventually it’s going to be on you because the bands are going to walk – and leave you for someone who knows better. The power is in the artists’ hands now much more than ever before, so labels that last will probably be the ones that understand that.

Glasswerk: You were talking before about the musical directions you want to move into. Where do you think you’ll move to next? Where are you heading?
Jenn: I don’t know. Personally I’m really getting more into electronic music and composition and I’ve been doing some experimenting with drum machines, synthesisers, bass-making practices. I think that’s probably going to situate itself more in the realm of a solo project I’m working on. But I do think we’ve done some of that already – we used a lot of keyboards and synthesiser and that kind of thing on “Civilian”. It’s just more subtle.
Andy: That’s something that’s been there from the outset for us – this urge to fill out our sound more than a typical two-piece band – and fortunately being in a recording studio you can just layer and layer and layer and anything’s kind of possible if you can imagine it. But the process for us has largely been about scaling back and restricting ourselves as we grow, and learning when it’s too much and what to leave out. And a lot of electronic music or a lot of the pop music that we’ve both been listening to is very simple music…
Jenn: I don’t know if it’s simple. I don’t know if I agree with you. I think some of most challenging and exciting music is being made in the pop spectrum right now. I don’t think it’s easy music at all.
Andy: No, but what I’m saying is in pop music you’re more likely to get a pure, amazing hook that just completely defines the song.

Glasswerk: So what do you listen to – when you talk about this simple-yet-complicated pop and electronic music, what sort of music do you mean?
Jenn: I listen to a lot of straight-up top 40 shit – like Rihanna, Drake and hip-hop. A lot of Robyn lately…
Andy: Yeah, there are some amazing Swedish bands: Robyn, The Knife and Fever Ray.
Jenn: I’m totally obsessed with it. The beauty of it to me is that it sounds simple but if you really think about it as a songwriter – and I really think about it – it’s incredibly hard to write that way. To see someone putting something in such a simple package and making it so effective, I’m fascinated by it. I’ve been trying to mess around with that but it’s tough. It’s not easy.

Glasswerk: You mean minimal stuff is harder to achieve – like good minimalist architecture…
Jenn: Yes, exactly.
Andy: For us part of the appeal, in addition to the sonic power of it all, is we both have come up from a young age having this physicality of music making. You hit a drum and you make a sound or you pluck a string and you make a sound. Now we’re both really digging into this world of electronic music and recording and producing, and it’s a totally different paradigm and it’s busting open our preconceptions of how we make music.
Jenn: It’s a total shift. My general theory about this sort of thing is that when you’re song writing or being creative, tapping into the creative impulse, you need to play a trick on your brain. Because no matter how into something you are, if you do it too much you establish firm habits, which become a part of the way you play and make it impossible to come up with something organic and new. If I’m using a certain guitar tuning when I’m writing I kinda get myself into a comfort zone – I get to a point where I think, ‘I’ve exhausted this’, I’m too comfortable with it and I have to find another tuning. Using synthesisers and electronics – it’s the same trick. I’m still writing in the same way but it’s just figuring out a way to trick your brain into thinking that what you’re doing is new, so you can get past your habits and inside a more creative space. I’ll probably be chasing after that for the rest of my life.