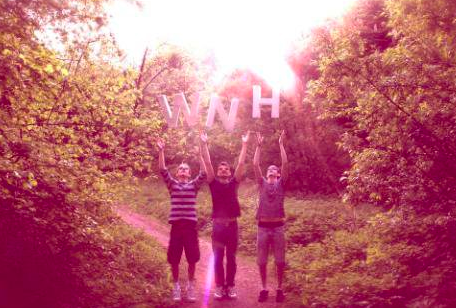 We're No Heroes released their new EP Quiet Colours last month, and are picking up plenty of radio play along with a reputation for an excellent live show.

Glasswerk thought it wise to catch up with the three-piece…

Hi folks.  For those who aren't au fait with We're No Heroes, kindly introduce yourselves and your band…
We are a 3-piece band from Cardiff. Tom plays guitar, Dewey's on Bass and lastly Luke on Drums. We all share vocal responsibilities and there is no real frontman. We make fun minimals indie guitar pop music with danceable rhythmic and melodic complexities.

There's a bit of math-pop out at the moment, with so much less poppy math bands rocking the underground circuit right now.  Who would you cite as influences?
All three over us have wildly different tastes in music, and there are only probably a handful of bands we agree on, but somehow it all comes together when we're in the same room. We artists that try and do different things like Battles and Animal Collective for example. We're big fans of Funk music of bands like Defunkt, Ohio Players, hip hop music to an extent and a bit of 80s post punk.

You've got a bit of radio play recently with your new EP and all – must feel nice?
Yeah its nice when it happens, especially when people you respect play your music. Although we're very modest, we never get distracted from these types of things or get ahead of ourselves when we get praised. It seems now we know where we want to go and a lot more people are responding positively.

Let me paint a picture; A higher being books you for a gig, and gives you full control over the venue and other bands.  They can be dead or alive, he's that good.  Who and where?
Most definitely Jimi Hendrix, If any one musician could be resurrected, I think it would unanimous. That guy was only getting started on his assault on a drastic change of music, May as well go with the dead people because its ridiculous. Throw Jesus up there to announce the bands, get Hendrix and Stevie Ray Vaughan to have a guitar off. Bring on the Ramones and then John Bonham and Keith Moon for the best drum solo ever. We'd probably have to be first on. Venue wise it would be Clwb Ifor Bach, or maybe on a plane at zero gravity!!

We're only halfway through 2011 – what've you got planned for the rest of the year?
We just want to take this EP as far as it can go and get a few gigs outside of Wales as well. We will probably be releasing a new single around October time, and a video. Basically just keep the momentum up is the goal, keep releasing content, writing new songs and generally keep people interested. Quiet Colours EP release was just the start for us.

Where can people find out more information about We're No Heroes?
Head over to our website link & check that out.. then you can also download our debut EP for FREE from link>