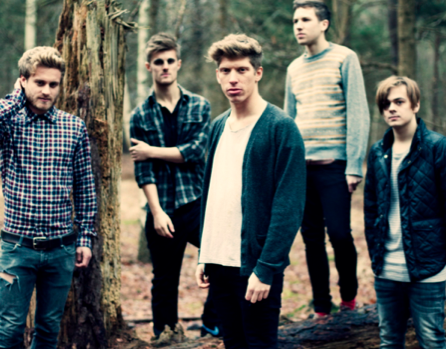 MSD Talks To Courage Have Courage

Born and raised on the island of Guernsey, Courage Have Courage have just been confirmed to play the BBC Introducing Stage at Reading and Leeds this summer.

Their brand of British, guitar-led rock is pricking ears and steadily making waves on the London live circuit – we at glasswerk.co.uk decided to catch up with them…

Q: An alien lands on earth.  He doesn't really know much about bands/artists and that – as he's an alien.  How would you describe you and your music to said alien?
Luke: Well, assuming the wildly improbable chance that the Alien’s native language happens to be English, I would sit him down with a cup of Earl Grey and explain to him that we are five friends who grew up on a tiny Island near France who ended up living together in West London last year. We were all reading Fine Art or Music at University and regularly found ourselves staying awake into the early hours watching movies, drinking beer and writing music we loved. Everything kind of fell into place from there, and since March 2011 we’ve played a few shows across the UK supporting a 7 track self release.

Secondly, making totally sure that upon landing on planet earth the Aliens priority really was to hear a description of what our band sounds like, I would probably tell him that the easiest way would be to check out our tracks online… but if he didn’t have Wi-Fi I would say that funnily enough we sound like five guys who grew up on a tiny island near France, living in London, staying up far too late, having way to much of a good time. However, if he were after some key words I would say bright, upbeat, energetic, British guitar music.

Q: It's 2011, the year of the rabbit.  What's been your highlight of the year so far?  It doesn't have to be anything to do with rabbits.
Ollie: If we are talking about rabbits, a friend of mine saved a baby rabbit from a gang of vicious rats back home on his stag night. Unfortunately the rabbit was so badly mauled he had to be strong in position of no choice, ripping it in half and throwing it in a bush in a glorious mercy killing… I guess it’s the thought that counts.

Jack: As far as our band goes this whole year has been totally unexpected with the support that we received from the guys at BBC Introducing and Kerrang radio before we had even played a show. Since then we’ve had a great time on tour, which led to us sharing a festival main-stage with Frank Turner, Example, Primal Scream, The Gaslight Anthem, Lissie and Ocean Colour Scene.  On a more personal level, as a group of friends, a highlight has been doing everything ourselves from management and booking, to sorting our video shoots and doing all our artwork ourselves. It’s cool to see people starting to care about what were doing this early on and we’re definitely stoked that everything people see or hear to do with our band we’ve had total control over and done ourselves.

Q: God calls you up, and he's wanting to put on a show.  Being God and all – he doesn't really have time to choose bands, DJs or a venue.  He's put you in full control.  Also – again, him being God and all – you can choose anyone alive or dead – he's that good.  Who's playing and where?
Ollie: As far as venue goes it has to be London Astoria, it’s a pretty obvious one but having watched so many of our favourite bands play there that venue holds a lot of memories for us, we’re gutted we will never get a chance to play it. For acts, probably artists like David Bowie, Jeff Buckley, Bjork, Sigur Ros, Dr. Dre, Refused etc basically artists who have in some way or another redefined genres and have left a creative legacy.

Everyone seems to write songs about God being a Disc Jockey so he can hop on between acts if he fancies.

Q: What bands/artists are there around at the moment that people aren't listening to enough?  Any tips for future stardom?
Ben: Pushing Hands, Daughter, and Bastille are three new artists who are writing exciting music right now, and even with Mercury Prize nominations people aren’t listening to our friends in Everything Everything as much as they should be. British music is in a great place right now as far as song writing goes across the board. It’s also cool to see heavier bands like Bring Me The Horizon breaking boundaries and turning up on prime time Radio One playlists.

Q: What's the rest of 2011 – it's the year of the rabbit, don't you know – got in store for you?
James: We’re playing Reading and Leeds Festivals this month on the BBC Introducing stage which is really exciting, they will be our ninth and tenth shows so we were pretty surprised to get an email from Radio One inviting us to play. The first gig three of us ever went to was Leeds Festival in 2004, at the time we said one day it’d amazing to play there so the experience definitely isn’t going to be wasted on us, we’re really grateful to BBC Introducing for giving us the opportunity. We’re already working hard writing a new record which were having a lot of fun doing, it’s a big development and we think people will be able to hear a lot of growth. We’re in a good place creatively right now, the songs seem to keep coming and we are all on the same page with where the sound is going, which is something we’re trying to take advantage of, other than that we are going to get back out on the road as much as possible before the year is out. As a band we are non-stop as far as our work ethic goes, so we will always be doing something for people to look at or listen to.

Q: That alien from Q1 is back – he's just got his mitts on a computer, and he wants to find out more about you.  Where's the best place he can go to find out more?
Facebook – link
YouTube – link
Twitter – link
Jack: If he likes what he hears he should come down to a date on tour, as our live show is something we really pride ourselves on. We’d also love to actually meet the little guy.