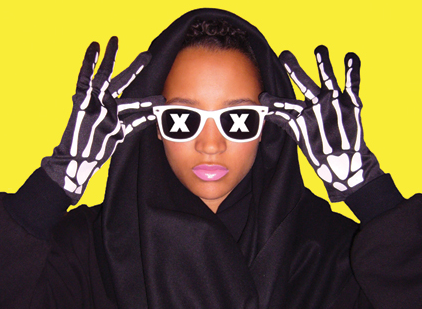 Danish MC Lucy Love's new single “Thunder” is out right now. A September show in London has just been announced, and above you can check out a video of her in action.

With big things expected, glasswerk.co.uk caught up with her below…

Q: An alien lands on earth.  He doesn't really know much about bands/artists and that – as he's an alien.  How would you describe you and your music to said alien?
I am Lucy Love the rapper, singer, artist, and designer. My style is graphic, futuristic and hypnotising. My music is urban pop with a twist. Do you understand me, alien?

Q: It's 2011, the year of the rabbit.  What's been your highlight of the year so far?  It doesn't have to be anything to do with rabbits.
It was when I won 2 Danish DJ Awards for best urban single and album of the year. And performing in front of 20,000 people in the Tivoli gardens in Copenhagen. I had once had a rabbit called Einstein.

Q: God calls you up, and he's wanting to put on a show.  Being God and all – he doesn't really have time to choose bands, DJs or a venue.  He's put you in full control.  Also – again, him being God and all – you can choose anyone alive or dead – he's that good.  Who's playing and where?
The Knife feat. Grace Jones, Janelle Monae, Basement Jaxx, Daft Punk and myself Lucy Love will be performing at my house. A house party going down in history.

Q: What bands/artists are there around at the moment that people aren't listening to enough?  Any tips for future stardom?
I think that more people should check out the New York goth punk'ish band Light Asylum. A friend of mine gave me a present, a CD with a few of their songs on it and I was immediately fascinated with their edgy sound.

Q: What's the rest of 2011 – it's the year of the rabbit, don't you know – got in store for you?
I’m doing shows in Denmark, Australia, Germany and Belgium. And on September 2nd I’m playing in London. I’m releasing my album Kilo in the UK. I miss my rabbit Einstein.

Q: That alien from Q1 is back – he's just got his mitts on a computer, and he wants to find out more about you.  Where's the best place he can go to find out more?
Facebook – link
YouTube – link
Myspace – link
Twitter – link
Official – link