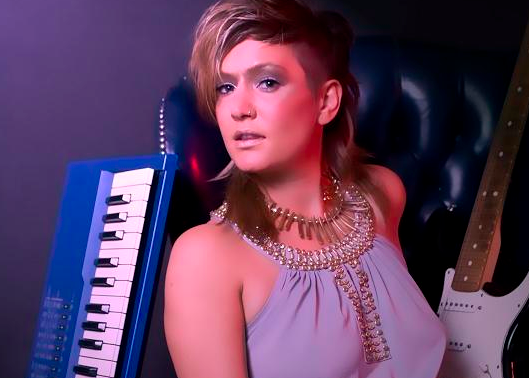 No stranger to the music scene having once fronted rock band Jynxt, Talitha Giusti is now going solo, and enjoying great success doing so.

Possessing all the necessary rock credentials – growing up on the road and a rebellious youth – she has a wealth of experience that belies her years to draw upon for inspiration.

Her single “Perfectly Broken” was released last week via Halo Records / Nova – and as such, we thought it'd be a good time to catch up with her…

Q: An alien lands on earth. He doesn't really know much about bands/artists and that – as he's an alien. How would you describe you and your music to said alien?
Me, I'm just a girl who has always had a passion for music, I started playing guitar (which for the sake of ET, is a funny shaped wooden box with some strings on it) at the age of seven. I began to sing a lot and that's when I started composing music and writing my own songs. I taught myself by watching and listening others and now with my music, I am trying to portray the sounds and noises, tunes and echoes which I hear in my head.

I am curious about aliens, I hope they like my music. It is quite alien like, with electronic sounds and drums mixed with synths and guitars and vocal harmonies. Some people think it's eerie.

Q: It's 2011, the year of the rabbit. What's been your highlight of the year so far? It doesn't have to be anything to do with rabbits.
2011 has turned out to be a fantastic year! Most importantly I have had a chance to work on my first ever solo project thanks to Halo-UK Records. Working with them has been great as I have had the possibility to be involved in the whole process from writing the music and lyrics to the production and arrangement, which has been a dream.

Q: God calls you up, and he's wanting to put on a show. Being God and all – he doesn't really have time to choose bands, DJs or a venue. He's put you in full control. Also – again, him being God and all – you can choose anyone alive or dead – he's that good. Who's playing and where?
Lets picture this show in the Grand Canyon! We could request the help of the aliens to put on an amazing light show with their flashy UFO's and also for the show's private transportation system – it being the Grand Canyon there would be difficulties for us humans.

The show would be full of bands, artists and musicians who made a big impact on the world and have changed or are changing the history of music by being innovative and brave in what they do! Pink Floyd, Nirvana, The Doors, Muse, Sex Pistols and the list goes on….

Sadly many artists were only entirely appreciated for their genius once they died, so that leads me to the main highlight of the show – The 27 Club – where we would have all those who died at the age of 27, names of whom include some of my favourites, Janis Joplin, Kurt Cobain, Jim Morrison and our very own recently lost, Amy Winehouse.

Q: What bands/artists are there around at the moment that people aren't listening to enough? Any tips for future stardom?
There are so many bands we hardly get to hear anymore, in a day where the charts dominate the radio shows, so many amazing and historical bands and artists are almost becoming extinct. Instead of the small handful of artists who play on the radio, on repeat day in and day out it would be great to have more variety in genres, lets hear some more Deftones, Mars Volta, Bjork, AC/DC, Psychadellic Trance, Peruvian pan pipe music…..anything, just give us something different.

As for tips of sort, I would just say keep at it, believe in yourself but always have a plan B and of course, try to be the best that you possibly can be. Progress.

Q: What's the rest of 2011 – it's the year of the rabbit, don't you know – got in store for you?
At the moment I have a single coming out on the 22 August. 'Perfectly Broken' is taken from my debut album called 'Paradox' which will also be released later on this year. The new video is up on youtube so go have a peek at it!

So far this has been mostly a studio project for me so now I am looking forward to taking the show on the road. I am currently getting together a band of kick ass musicians, so wish me luck and if anyone reading this is interested – get in touch!

Q: That alien from Q1 is back – he's just got his mitts on a computer, and he wants to find out more about you. Where's the best place he can go to find out more?
He and anyone else can find on my Facebook page (link), where all the news, updates and blogs are and also my website, talithamusicandart.com (link) .