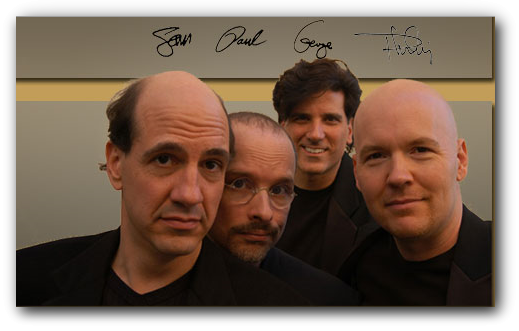 The Blanks aka Worthless Peons

The Blanks are back in town. We caught up with “The David Hasseloffs of A Cappella” ahead of their latest UK tour for a quick chat. Boing fwip.

Q: You've been to the UK to tour a fair few times recently. We love you here. Aside from the weather and the food what are you're favourite things about England?
Why, thanks, the feeling is mutual! Gosh, where to begin? Newspapers with naked people in them. Obviously. Folks constantly offering us sweets, and not just the ones wearing trench coats. Mushy peas… wait, that’s food-related. There is the colourful money of course. We are perplexed about a few things in your country… such as why all the showers here have odd glass partitions that allow the shower water to flow out and onto floor. And you guys still insist on the “two faucet” system in your sinks, one with scalding hot, the other with freezing cold water. I think once you guys fix up your plumbing, there will be no stopping you.
Q: You ended up starring in Scrubs after playing at the cast's Christmas party. How did you develop The Worthless Peons to fit in with the show? Or did you just wing it?
It wasn’t easy – we had to reach down deep inside to find that pathetic, worthless, peon inside all of us. I think that’s why people can relate to our “characters” – who hasn’t at one point felt like an utterly useless waste of space who never should have been born? Once we became peons, trapped in a psychic prison, we found our only way out was to sing, in four-part harmony. Now when people try to insult us, we strike back – usually by singing “Boing fwip.”

Q: The rapper and hip-hop legend Jay – Z regularly credits himself with “bringing the suburbs to the hood” and revolutionising the fourtunes of hip-hop by making it mainstream. Are you bringing the suburbs to the barbers shop (and doing the same for a cappella)?
Funny you should ask. We have been working on crediting ourselves with something for a while. So far all we’ve come up with is: “we are the David Hasselhoffs of a cappella.” We would like to bring something to the barbershop, but we have so little hair.

Q: Favourite Scrubs moment?
Probably when we were on the rooftop, filming the 100th episode, singing “Somewhere Over the Rainbow”. The sun was setting and we had maybe 12 minutes of “golden time” as they call it. Zach [Braff] was directing, shouting out instructions from the parking lot with a megaphone. He had to coordinate scenes that took place on several floors of hospital, with the camera on a huge crane that would rise up four stories and catch us singing live. Paul insisted on tuning his ukelele, which took about 9 minutes, but we finally got the shot done just as the sun sank below the horizon. Afterwards Sarah Chalke bought us a giant “chocolate fountain,” and we celebrated by jumping in and splashing about merrily. Later they told us that the fountain was for the whole crew, who were supposed to dip strawberries in it.

Q: Ringo Starr is my best friends third cousin. You guys are fans of the Beatles right? Have you had a chance to do the touristy stuff in Liverpool while you've been in the North West?
We are utter and complete Beatle fans. Philip’s Dad is from Liverpool, actually, and his cousin actually stabbed George Harrison. We haven’t done the local touristy stuff yet… although we were in Hamburg recently, and visited the club that the Beatles played in. That was fun, although that club turned out to be in the middle of the Red Light district. Let’s just say they interpret “peon” very differently over there.

Q: What are you going to do when that pumpkin breaks?
Ha. “When” it breaks? O ye of little faith. That pumpkin is a workhorse, and hasn’t let us down yet. The real diva of our show is Mrs. Claus. We made the mistake one time of using the wrong electrical transformer with her, and she started dancing at ten times her normal speed, literally smoking as sparks flew out of her. She cursed us out afterwards, in Italian (her native tongue).

Q: Who are your a capella legends? Who do you look to for inspiration?
Really? Are there are any a cappella legends? I suppose the King’s Singers, whose albums we all grew up on. We do worship Monty Python, and the two Ronnies, and of course, Benny Hill. But most inspiring to us? That has to be our fans, who are the greatest-looking fans in the world. Overwhelming in their dedication, who will no doubt be wanting to get their hands on our new tour CD, Worth their Weight.

Q: And lastly, if you were not touring the world entertaining your adoring fans, what would you be doing?
Michael Jordan once said that he’d still be playing basketball, even if they didn’t pay him millions of dollars. Now, if we couldn’t tour the world singing a cappella, our second choice would be playing basketball for millions of dollars. Followed by lots of gambling.
When we started this journey years ago, we were just four dorky guys who’d get together at parties and sing in the kitchen, thinking it made us look cool. Not realising it had the exact opposite effect. But we blithely carried on doing it because we enjoyed it. That somehow landed us on a TV show, which brought us here, across the pond. We’ve had a chance to see the world, something we would never have done, had we not started harmonising years ago, just four friends clustered around a bowl of bean dip. And so we’re going to keep dipping our chips into that dip, until they start getting kinda soggy, and the host of the party looks at his watch and says, “hey, fellas, it’s getting kinda late.” And we’ll just look at him blankly, until he throws up his hands and goes off to bed. Perhaps he’ll put his arm around his girl and pull her close, as the sweet strains of tight harmony drift up from down below, and she smiles softly, dreaming of us splashing around in a chocolate fountain.

And we’re constantly surprised. In some parts of the world, forcing people to listen to a cappella is a recognized torture technique, more effective than water boarding. But we show up at gigs these days, and we see the barricades and hear the fans chanting our name and we say to ourselves; “they do realise this is an a cappella show… don’t they?” And then we take the stage and the panties start to fly… some of them even from women. It’s a phenomenon, and we feel blessed to be a part of it.

The Blanks are touring the UK as of NOW. You can download their album from Itunes.