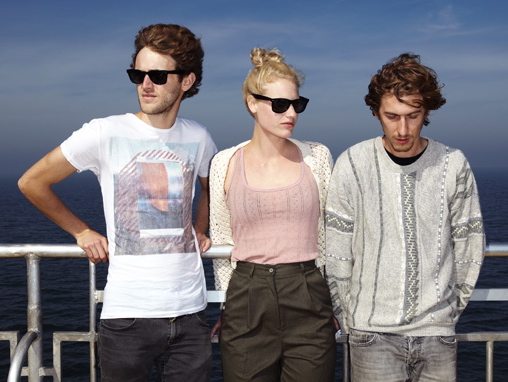 “Everything is possible” – Interview with SX

SX are part of a growing number of genuinely noteworthy, stirring and interesting bands coming out of Europe today. In terms of indie credentials, they tick all the usual boxes. Their sound is a mix of woozy dance beats, melodic electro-pop and sullen vocals mixed in with mild melodrama – all of which comes together beautifully to help set them apart from most others working within the electronica genre.

What kind of music were you exposed to growing up in Belgium?

Benjamin: Well in the eighties we enjoyed lots of music that gets under your skin, in your blood, and then after a decennium of assimilation in a cavity of your mind, comes back out later in life, all from a renewed perspective to make music yourself. From the nineties on we listened more consciously to music, through the period of assimilation of the eighties: Belgium in the nineties for me meant mainly a lot of Nirvana, Radiohead, dEUS etc. There is a flourishing Technoscene in Belgium also.

Did the point come in your lives where you said to yourselfs 'ok I want to make music'?

Stefanie: Does a mother choose to produce milk to feed her newborn?

Maybe not. Other than music, what are your own personal major influences?

Stefanie: Everything that contains a good story can be a possible source of inspiration. An image, an emotion, a vision, a song, a thought, a movement… In short, you can find a good story in anything. You only have to bring it very close to yourself. Sometimes you have to dig really deep and search to see and to feel a beginning and an ending in a story and sometimes it comes to you automatically. Actually it is an incessant quest for ourselves and an incessant scan of our boundaries that excites us to create.

How do you go about creating the sound you make?

Benjamin: We love very much to work around an idea, an image, a vague memory or a hope that is not yet formed for the future… where we then go looking for during the creation. The basis of our music is mostly formed by the ‘song’ itself, it arises, mostly by the combination of a chord progression and a melody line. Of course rhythm is a major element here.

What kind of gear do you use? Feel free to get geeky on this

Benjamin: We have a lot of gear in our studio, from a piano, organ, wind chime, to a Prophet, Nordlead, Roland JX8P. We also work with a lot of softsynths and we love to use extra fx with the keyboards. Furthermore we try to give our sound a realistic, raw touch of individuality by using acoustic drums and a Fender Stratocaster guitar with Roland Amp. A very important instrument of course is the voice of Stefanie.

How difficult is it for young bands like yourselves to find a label willing to release their music?

Stefanie: To start I think that we, young bands, nowadays have very much luxury to promote our music ourselves before a record label comes into the picture. The big budgets to record your music in a cool studio are not necessary – from your ‘homestudio’ you can achieve a very substantial result. This also applies for the creation of our own videoclips. And then we still have the internet that gives us the possibility to propagate our music worldwide, to promote and to sell it. It is a luxury a lot of young bands formerly never might have known. And as you say it yourself, we are a young band and our debut album is still in development. A first album is for us at this moment the most important thing. First the music, then the rest. We also have somewhat a luxurious position for achieving a deal.

Thanks to the success of ‘Black Video’ we got a lot of offers of different record labels from home and abroad, but we still wait. We realize naturally we are surfing a good wave and decisions will soon have to be made. Besides, ‘Black Video’ is the perfect example of the power you presently have as a musician. You completely take control and with some luck and some good vision sooner or later you come to the surface and the ball gets rolling in a very natural way.

Looking back to when you first started the band, what advice would you give to yourselves from where you are now?

Benjamin: “Keep on doing what youre doing” – I think we have changed somewhat, we are more ‘SX’ than ever, because we are busy with it, and not only we ourselves, but also people around us. SX doesn’t only live within us, but also around us and so we are confronted even more with SX, and this more publicly. That extra perspective, is also an extra support and gives a new dimension to our music, an outer dimension, a nakedness that makes you somewhat harder, and also gives you the feeling: “Everything is possible”.