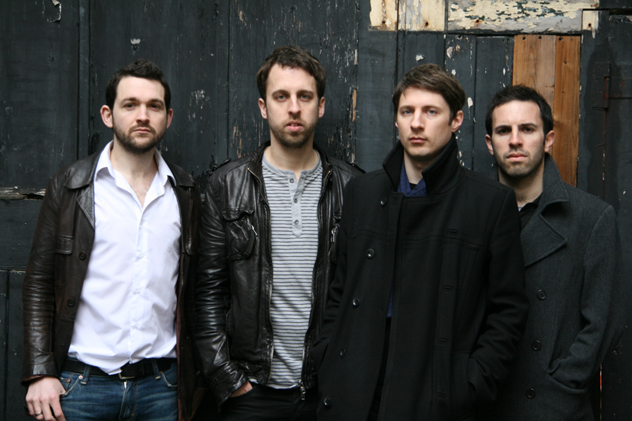 Rockers Sennen have a lot going on right now. A new single from their soon to be released third album will be out next week and there is a tour to come.

You can listen to and buy the single, Vultures, at link

The band, made up of Larry Holmes (guitar, keys and vocals), Rich Kelleway (guitar and vocals), James Brown (drums and keys) and Tim Kelleway (bass) took a little time out to answer some questions.

G: Tell us a bit about the history of Sennen. How did you guys first get together?

S: Rich and I have been in bands together since school. We met Brownie (the drummer) at university and that’s when Sennen started. We were a bit different back then to what we are now. Tim, (Rich’s little brother) joined a couple of years ago when our old bass player had to leave.

G: And where did the name come from?

S: There used to be another guy in the band when we first started at uni. He was a big Ride fan. ‘Sennen’ is a Ride b-side. The rest of weren’t particularly into Ride at the time so it’s a bit misleading in a way.

G: You’ve had some success in the US, with songs used in TV shows like True Blood and One Tree Hill. Has that helped to raise the band’sprofile?

S: I think so. Certainly in the US. We released our last album on record store day in the US on limited edition blue vinyl. It sold out before release date, and I think the TV stuff might have had at least something to do with that.

G: Your new album, Lost Harmony, comes out in April. What can we expect to hear?

S: Our best record. Most people probably say that ahead of a new record coming out but we’re genuinely very fond of this one. We wrote this quite differently from our previous records. I had quite a few ‘quiet’ songs knocking around that I hadn’t really thought approp[riate for Sennen before. We started getting together in my house and playing these songs just for fun really. They were quite lofi, country-tinged even. After a while we had loads of songs and thought that perhaps this could be the next Sennen record. There’s still some weirdness and noise in places but it’s mainly our attempt to capture the sound we first stumbled upon in my house. It’s pretty bleak in places but to be honest, we had such a great time making the record I think you can hear a certain optimism and warmth throughout.

G: And tell us about the single, Vultures, which comes out next month and why you chose it as the single?

S: It’s not obvious single material – it’s one chord for four and half minutes! But it has a certain immediacy to it and it’s pretty dark, so we thought it would be a cool single.

G: Will you be touring in the UK to promote the new releases?

S: We will. In May and June some time.

G: What does the future hold for Sennen?

S: After unprecedented success, fame and fortune, we will retire at the top of our game, immediately regret it, reform less than six months after we split and milk the reunion dollar forever more.