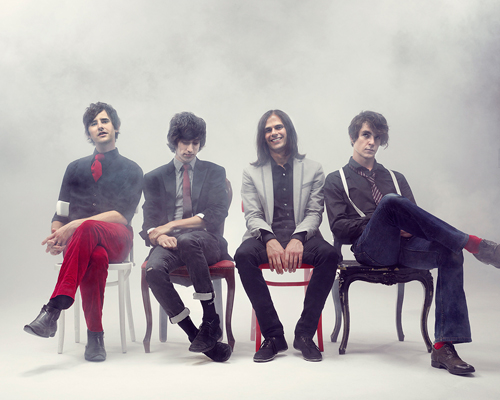 Interview with Australian Band [ME]

ME have just toured with Evanescence, Panic At The Disco and Kasabian, they've headlined KOKO to celebrate the release of their mini-album, 'Another Story High', being released via Lizard King Records, and they made MSN's Ones To Watch list earlier this year.

Lizard King were the guys that put out The Killers FYI, so if you're in any doubt as to what this band sound like, you don't need to look beyond the label's back catalogue, as the same sense of theatre and lofty pop is in play. Despite this impressive call sheet though, you'll struggle to find much about them online. This isn't owing to a lack of interest – one swipe of Hype Machine and you'll see them posted around – rather these guys are a Google nightmare. The lead track from their mini-album, called 'Naked', doesn't really help either. We wanted to get to know these guys a little better.

I'm struggling to find you on Google! What was the idea behind your band name?

We wanted a short name, and when someone suggested it we thought it was a bit ridiculous, but that it could work. We weren't thinking much about google, but now we understand it can make things quite difficult for people. A nice little challenge, perhaps. As for it's meaning we could just go on forever. For our mini-album we made sure to consider googling-ease to balance things out a bit, so we've called the mini-album 'Another Story High'. It comes out on March 5th, and along with it the single Naked. We're told that googling 'me naked' gets pretty interesting image results.

There seems to be some influences in your music from Muse to Queen. However I listen to it, it sounds big and theatrical. Was that something you set out to do -write music destined for big stages?

Like so many people still do, all of us love the era of stadium rock. As a group of musicians, we love strings, brass, choirs, and sound art; the appeal of all this combined does lend itself to bigger production and stages….when we can find them. We love our theatrical music, yet there is a strong and definite foundation of guitar/bass/drums and vocal, which we build upon.

Extremely important – we started out in Australia with no funds to record for a long time, so we just honed our live show and built up our repertoir. One of our weekly residencies went for 10 months straight. We would just keep adding theatrics into the show, expanding our horizons and experimenting every other week. We had an open-minded crowd at the time so they were always up for it. Even when we could record, we could only do one or two songs a year. So we just kept playing live. And we would give anywhere a go. Now that we have recorded properly, we're about to experience just how wonderful having recordings is.

You've been on the road with some big acts, including Evanescence and Kasabian. How have you found being thrown into the deep end of touring in the UK, compared to the majority of bands who will be playing dives to 20 people for years before landing main support to Panic! At The Disco?

We played our fair share of dives – Australian dives have 3 people in them, and they take far longer to travel to. The UK touring experiences have been incredible, and crucial for us as we've learnt so much about performance and crowds/venues of that size. We are extremely grateful to the bands that have had us on as support, and to the crowds that have been so kind. It has definitely made a big difference to our live show.

Have you had a chance to discover any British bands you'd like to champion?

We've seen a couple of breaking ones you already know about that we think are great – Dry the River, and King Charles. Through Barny, who produced our upcoming album, we met Purson, who are recording with him currently. I like them and think they will do well. There is also a couple of bands we played with at O2 Piazza (foyer) with harmony female vocals that we liked, called Hall of Mirrors, and a post-rock band called Codes in the Clouds. When I was in Australia I discovered UK band called Animal Kingdom that I really liked. And OCEANSIZE I love – they toured with an Australian prog band and their album Frames is freakishly good.

Has there been any big musical revelations, such as any massive, classic British acts you'd not heard over in Australia that you're kicking yourself for having not heard as kids?

British music has shaped us so much – as it has probably most other Australian musicians. We are aware of a lot of UK bands vintage and modern. Totally gutted we missed out on being born in the right era to see Pink Floyd, Led Zeppelin, The Beatles, Queen, The Who, there are so many others also who we love now. Radiohead is a more modern, deep-set love of ours. Lately for me, I'm finding that I fucking love Tears For Fears. Access to great music is much easier in the UK – a great thing about being here is the Royal Albert Hall, and its 5 pound standing room ticket area! We've seen Holst The Planets, some Liszt, Gershwin and a bunch of other stuff. Gonna check out Verdi's Aida when it's there, too. Seeing classical music in Australia is a bit of a pain in the ass to organise.

What did you listen to as kids, and has that shaped the music you make now?

Luke started music the earliest in life, and he started on piano in a family that loved the Beatles, Queen, Beach Boys, Billy Joel, and good vocal music like that. He also had quite a classical and musical upbringing, such as The Sound of Music. It's definitely shaped his writing and he is the most prolific writer in the band so it has been important, and we're pretty grateful to his parents for having good music taste. Spike's Dad loved Led Zeppelin and even saw them play when they toured Australia! When I was young, much before I learnt guitar, I thought that Guns n' Roses, Skid Row, Metallica, Poison and other hair guitar bands sounded the coolest. The urge to add guitar melody, distortion and thunderous electricity lives on. I love it.

What's the message behind Me, what are you trying to get across to the world?

Love of music itself; we place a high importance on melody, and the music of other times. That these things, and artistic expression trump statements of fashion and trend. If you love Star Wars and Lord of the Rings, it's ok. And a love of vocal harmony. Also, the message in our new single Naked, is pretty on-message for us.

What are you doing that's different to any act out there, and also, what are you bringing to Britain from Australia in terms of sound.

Some of the things we do may not be that different to other bands, but it's the combination that could be quite odd. But with more orchestration, probably. Adding to that, there are some ridiculous sounds and instruments on our album, due out in summer – as well as an insane amount of guitars and vocal harmonies. Live, we have theatrical ideas of things we used to do in Australia that we are building up friends, musicians and performers here in Britain to accomplish. We can't wait till we can put our own stamp on our shows entirely. In terms of bringing a sound to Britain, I'd say we are more likely to bring a sound from Britain out to the rest of the world; our sound is very British and suited to Britain.

And finally. Who's your favourite chat show host and why.

Does Jon Stewart count as a chat show host? We love him. It's amazing that so much of what he does on the fly comes across so profoundly.

[ME] play a Glasswerk show at the new Glasswerk venue Surya in Kings Cross on Tuesday March 27th. Tickets are available from: link