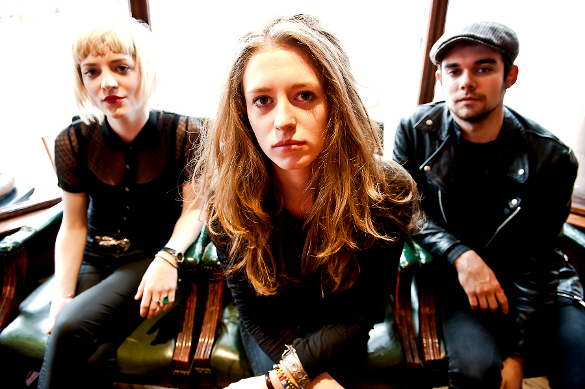 Their previous singles have been lauded by the likes of NME, Rock Sound and Clash Magazine, so with a new release out this week we thought we should have a chat with the London based band.

Tell us a bit about the history of Bleech. I think you guys first get together when you were still at school?

Katherine: Yes, we were all at school together but in different years. Well, Jen and I played with a previous drummer who decided to be sensible and get a real job so Matt (a guitarist at the time) said he would ‘give drumming a go’ until we found a drummer….only Matt never left!

Matt: We started playing gigs all through our time at school, Katherine used to bring her revision for her A-Levels to sound checks and stuff…probably explains the grades!

Jen:…Me and Matt don’t have that excuse!

And where did the name come from?

Matt: I would love to tell you a really interesting and ‘out there’ story of how the name came together but in fact it was a suggestion from a friend of mine and we were so fed up for thinking of band names we just went with it! It’s short and snappy, you can’t mistake it!

Katherine: But in fact we did just name ourselves after Nirvana’s first album….NOT.

Your new single ‘Mondays’ was featured on Waterloo Road. Has that led to lots of interest in the band?

Jen: Erm not really, but we are now all addicted to the programme… ha! No seriously it’s really cool to hear your music somewhere, especially on T.V. We got a lot of good response from it, particularly from our dear fans and family who had to sit through an hour of Waterloo Road.

Katherine: We were told there was only going to be the one song ‘Flowerhands’ and in fact they played ‘Mondays’ as well which was really cool.

Matt: The single was played over two teenagers shoplifting vodka….we do not condone this type of behaviour, unless you’re skint of course.

And your album, ‘Nude’, comes out later this year. What can we expect to hear?

Katherine: Some of the songs from the album are the first we ever wrote together as a band, so there’s a lot of excitement and youth that comes through.

Jen: It’s a pretty eclectic mix! There’s heavy riffs, melodies and even strings! Something to suit all.

Are you looking forward to your forthcoming UK dates?

Matt: We have actually just finished a 20 date tour of the UK and Germany, it’s where we feel most at home! Travelodge is certainly my second home if not first, I get a warmer shower than I do at home. We can’t wait to get started on the next leg of UK dates, it’s great travelling to parts of the country we’ve never been to and rocking the s*** out of people, we hope.

Jen: We have had a few festivals confirmed already and hopefully there’s a lot more to come! We are actually headlining a festival in Nottingham which will be great and we have also just confirmed Y Not Festival which has some great bands playing too. We have our first ever gigs booked in France for May which includes a festival in Brittany.

Katherine: The French festival is a tattoo festival so we might come band with a few anchors and I Love Mum tattoos.

And what are the band’s future plans?

Matt: We are already demoing tracks for the new album which is exciting, expect to hear somthing soon…but not too soon, we haven’t released the first one yet!

Jen: Just world domination really… or is that too clichéd?