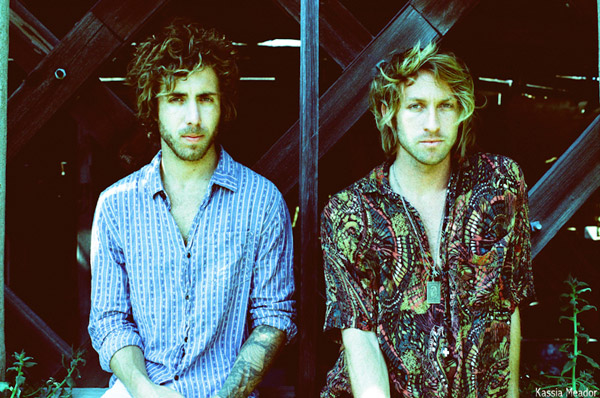 Le Blorr are a two piece band from the States. Their psychodelic rock first hit the UK's shores when the band toured with Angels And Airwaves. Glasswerk got to catch up with the band and ask them a few questions.

1) Bastard Lovechild Of Rock n Roll is quite a name for a band, how did you guys come up with it?

The name came from a dream… One night Marc Bolan appeared in my dream, and I know Chris loves him so I travelled over to his dream to get him (via dream travel.. its legit, look it up). While we were hanging out Marc told us we need to start a band together and we need to name it Bastard Lovechild of Rock n Roll… We thought that was a bit long so he said to go by the acronym Blorr. A few minutes later Freddie Mercury appeared and deemed us Hot Damm and Cookie.. As he left he said “Oh and add a 'Le' in front of the Blorr darlings, don't want people to think you are Gwar now do you?” We were both looked at each other in amazement. Freddie knew of Gwar?

2) As you guys are a two piece band, do you think this makes things easier or harder for you from a working point of view?

That depends on the task. When it comes to driving through the night from New York to Florida to make a gig, having only two of us is more difficult than being able to split up the driving between 4 or 5 people. We also have to wear more hats in the business side of things. It has always been up to just Adam and I to cover all of the marketing, booking, promoting, accounting, and networking that is involved in making any business grow. Then you have to find time to create the actual music. We just recently got help in management and booking in this last year which have been great. The positives in being a two piece band would be things like less arguing over direction of everything (art, sound, etc.) The more people you have the more you have to wait on their availability to tour, practice, etc. Travel is a heck of alot easier too. But with our new album we are expanding our sound a bit so we will be touring with more members. So I'll be able to answer this question better a little down the road.

3) How was your recently finished European tour with Angels and Airwaves, how was it?

Our first European tour was one of the coolest experiences we've ever had. It was our first time in Europe so our experience through Germany, Brussels, Paris, and the UK was filled with beautiful architecture, rolling landscapes, delectable humans, and drunken debauchery. Being able to play 12 shows to over a thousand happy AVA fans a night just made it surreal. It was a time we won't ever forget I can tell ya that much.

4) Have you guys made any headway towards writing a follow up to your previous record?

Yes! We are more than halfway finished with our first full length album. We are feeling quite lovely about its growth. We hope to achieve a full release of serotonin in the mind's of the listeners through this album.

5) What are your plans for the summer?

We are leaving mid may to play in New York City, Boston, as well as a couple shows with Blink 182 in Quebec and Pennsylvania. We also play a festival called Bamboozle in New Jersey which should be fun since we get to watch Foo Fighters and motha fuckin Bon Jovi yo. “Shot through the Heart” was on repeat on my walkman at age 8. After that we go into the studio in Manhattan to finish up recording our album in early June.

6) Can we expect to see you guys in the UK soon?

Our fingers are crossed for the first opportunity we can to come back the UK. We were charmed.

7) What has been the high point of your career so far?

That's plenty sentimental! With a new record on the way, we can hopefully look towards another visit from Le Blorr in the not too distant future.