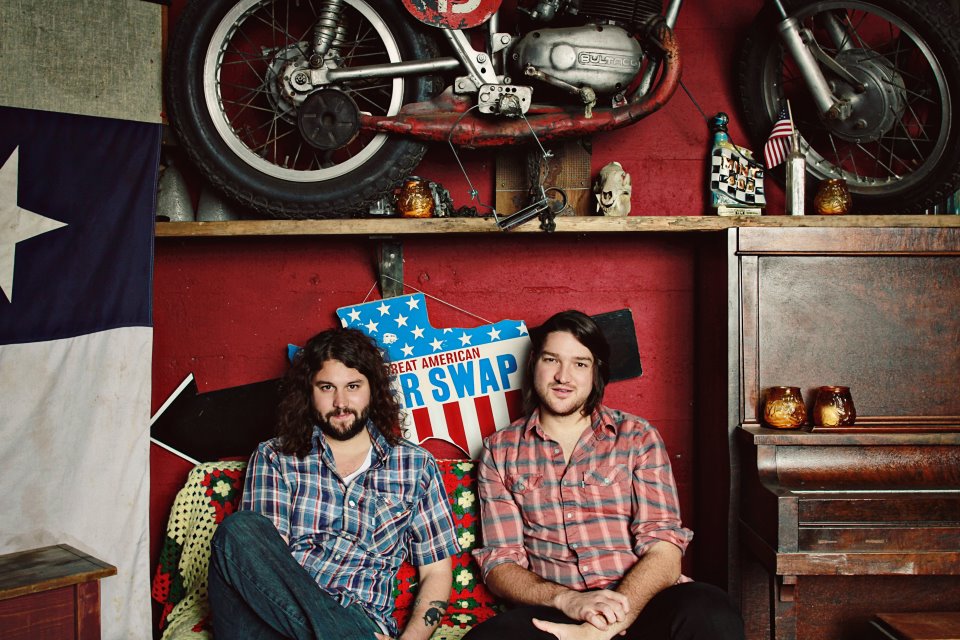 Chatting With My Goodness

My Goodness is made up of two musicians: Joel Schneider on guitar and vocals, and drummer Ethan Jacobsen. They have been going down a storm as support act on We Are Augustine’s UK tour over the last few weeks. I got a chance to ask Joel and Ethan about their music in Glasgow before the final show of the tour.

JS: We worked together in Seattle a couple of years ago. We were both in other bands at the time. One night we both got off work early and decided to go to another band’s practice space. I hadn’t actually picked up a guitar in a while but we decided to just play.

EJ: We were just jamming out and it felt good. We wrote a couple of songs that night and that was very cool. We continued to do that over the next couple of weeks, and then there was an employee band night coming up at the place we worked so we decided just to give it a shot.

JS: We used My Goodness initially just as a working title. It was like we put all our goodness into it. The response at that show was beyond anything we could have imagined, so we were like, maybe we should continue to do this.

You’ve stayed as a duo ever since?

JS: Yeah. We’ve tried out bass players, which is cool and it almost worked out in a couple of instances but there’s something about the simplicity and the raw nature of what we can achieve as a duo. The whole point of this band is that we are able to just play, not to have any great structure really but just to do what we want to do. We can express ourselves as a duo in ways that we’ve never been able to before.

Seattle is a real music town. It must be a great place to make music?

JS: It’s an amazing city. There are so many people involved in the music industry there and the radio stations support local bands. We did an in studio for a local radio station before we had even done two live shows.

We’ve featured the video of your single, C’Mon Doll, on Glasswerk. What can you tell us about the song?

JS: That was one of the first two songs we wrote on that first night. I came up with the riff and thought, ok, this is how it goes. The reason I got the whole idea when we were sitting at the bar was that I’d tried out a few things at home on an acoustic guitar with different open tunings and the like, so I just decided to give them a go on an electric guitar and see how it sounded.

And I think you’re working on an album now?

JS: We have an album already recorded. We hope that we can get it released in the UK sometime before the end of the year, but we don’t have a date set in stone right now.

How is the tour with We Are Augustines going?

EJ: Amazing, We’re having such a great time.

JS: We’ve toured together before, back on the West coast of the States so we’re already good friends. It’s really cool to be back on the road with those guys. And we’ve had a great reaction from the UK fans which is so nice for us. Dingwall’s in Camden, Birmingham, it’s been better than we could imagine.

EJ: We have. We’re doing a couple of small ones locally.

JS: And we’re hoping to come back over here again, maybe late summer, maybe into the fall. We’re still trying to fix that up.

Are you both still involved with other bands, or is this now your main project?

EJ: This is pretty much my main project.

JS: Mine too. I’m still involved on one band although it’s a bit heavier. Our record was just released locally in Seattle, limited to 500 on vinyl. I don’t really sing too much on that, I just tend to scream a lot!

And what does the future hold for My Goodness?

JS: After tonight’s show the tour’s over. We’re going to head to New York, play there, and then head back home to Seattle for a big show. We’re playing for a radio station the day we get home, so that’s going to be fun with the jet lag and all.

We’re then just going to wait and see what happens for a few months. Our record was only out for a split second in the Seattle area and it wasn’t the best situation for us so we bought our record back. Right now we’re just trying to figure out what to do, where to get a deal, that kind of stuff.