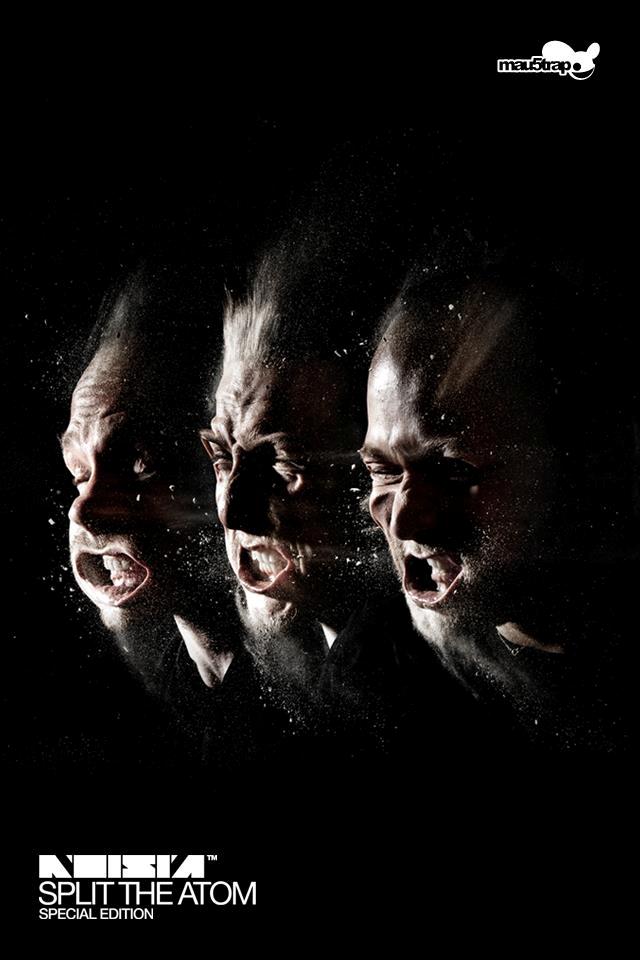 NOISIA (who took their name from the word VISION inverted on an upside down VHS tape) are Nik Roos, Thijs de Vlieger and Martijn van Sonderen, hailing from Groningen, The Netherlands.

Influenced by an eclectic range of artists from The Prodigy to James Brown, Noisia make music for DJs and dance-floors that is interesting enough to cross over from the clubs to your MP3 player. They have mixed it up for fabric in the past and are on a non-stop tour of the world where they join the likes of Tommy Trash, Bare Noize and Foreign Beggars on July 7th at Great Suffolk Warehouse, London for LWE Presents Mau5trap.

How did you guys come together? What does each of you bring to the table and what makes you friends?

We got together in high school. We were all enthusiastic about drum&bass, and probably theonly ones in our school who were. That brought us together a bit. Then a love for hanging out and doing dumb shit like graffiti & smoking weed made us friends I guess.

How much influence did any local Dutch scene have on you? What music did you grow up around?

We grew up around mostly typical 90’s American stuff, which was also big in the charts here, apart from the whole euro house thing of course which was huge. We didn’t know of any ‘scene’ of anything when we got into d&b, we didn’t know there was one.

You make a lot of music for computer games – why does your sound suit it do you think?

It doesn’t have lyrics – that helps. It also generally is quite sound design heavy and intense and / or atmospheric, something that goes well with visuals, interactive or not.

How different is it making music for a game vs a straight track?

There’s more freedom in the sense that progressions and mixdowns don’t have to be dancefloor and dj friendly. There’s also a strong coherence required in sonics and themes, you can’t go all over the place, it has to fit the game and be consistent throughout. It’s also really fun to work with gameplay videos and do cutscene music; working from the visual can lead you to different places musically.

How important did it prove being asked to do a fabric compilation?

Quite important. We were very happy at the time, the Fabric brand is quite strong and consistent, we are proud to be a little dot on their timeline.

How has your sound evolved since then?

I guess the world got used to the idea of bass music more and more, which led us to put out more of the cross genre stuff we hadalways been doing but hadn’t put out or finished cause the market was still quite bracket-y. In that sense we were encouraged to explore more, and did. Not everything resonated well with the d&b community, but a surprisingly large amount did. From there we kind of set out to be a bit like the Prodigy genre wise: they are more a genre onto themselves than anythingelse, they can do any tempo and people will recognise it as them. That’s a hard act to follow but also a great freedom!

How did you get signed to Jay Z’s label, and again, how important has that proved?

We’re signed to Roc Nation publishing, not their label. It has helped us get film syncs and game work, and given us the opportunity to explore the pop music world a bit. We have learned a lot from that.

What should people expect in London at the mau5trap presents event?

What else you looking forward to?

The finishing of our new studios! Really excited about the build. You can follow it on our facebook.