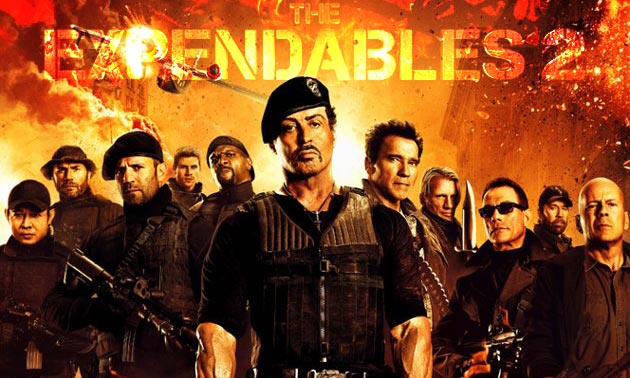 With a crash bang and a fair few wallops, Expendables 2 explodes onto screens with the return of Barney Ross (Stallone) and his mismatched team of professionals.

Sent on a mission by the mysterious Mr Church (Willis) the team come up a cropper when one of their team is killed, courtesy of one Jean Vilain (Van Damme). Retribution is then on the bill as the team set about taking down this opposing team of mercenaries and putting an end to their plot to collect and sell rather a lot of plutonium. And that really is about the gist of it.

Stallone pulled off quite the feat by getting the few names together he did on the first film, stamped with the approval of a couple of really big names doing cameos. If you were impressed by the cast list of the first film they are pretty much all back, and some in greater roles than before, and some added names to the roster as well. But it’s the sheer amount of names on the cast that is both the films greatest merit but also its downfall. With so many guys, how do you allot fair screen time?

Willis and Schwarzenegger have had their roles boosted a bit, but still remain in the guesting capacity. And perhaps that’s why they work so well. Add to that Chuck Norris – who checks in at a different time on the films set list (and who pretty much almost steals the show). Stallone and Statham have pretty much the bulk of the time on screen again, but their team mates are on the wane.

We suspect few people will complain about Couture and Crews getting moments here and there to shine, but Lundgren, who impressed last time round has a much reduced role. He is there throughout, but most of his moments are through comedy lines as opposed to bad ass action. Jet Li gets less time than most, but impresses with a decent bout of rapid killing in early scenes. Throw in Liam Hemsworth and Ya Nan and you have two new characters too many. Nan in particular could have been left out to make room for others. While she isn’t bad in the role, she actually has one of the biggest parts, but for no good reason other than to have a girl in the mix eating up others screen time.

But the biggest disappointment is how little screen time Jean Claude Van Damme gets as the big bad wolf (seriously he actually has repetitive dialogue about Sheep and Wolves). Firstly it has to be said that he is great in the role, slithering his way around the dialogue and relishing the moments he has with his foes. But sadly the role only consists of making an evil first appearance with his group of minions (aided pretty well by the humongous Scott Adkins), but then he spends the large portion of the film hanging around the mine he is looting. We don’t get any decent Van Damme action until he faces off against Stallone at the climax. Now that is just a pure waste! Wouldn’t we think he would be an even more badass if a couple of the other team members tried to face off against him and lost?

The fight itself between Stallone and Van Damme has to be said is choreographed quite well, and shows both of these guys as being pretty badass. It’s a complete joy to see Van Damme as the villain for a change, and he pulls of the majority of his dialogue, but especially his moves very well. The fight though may fall slightly short of one of the all time greatest as it is over all too soon.  A nice meat pulverizing round in between would have been nice.

The action overall is pretty decent, and the amount of exploding limbs, heads and blood splatters (be their practical or CGI) make up for the lack of rude words spoken on screen.

There is a feeling though that the film is lacking in the mano-a-mano type of fighting. With so many fighting legends on screen – a few more throw downs might have been nice as the gun battles do start to get a bit repetitive.

What also gets a bit repetitive is the need to keep stepping off the gas. The film gets going then stops for a bit of banter, then speeds up again and then slows down. If you have ever been in a car with anyone who drives this erratically you will know how annoying it can be. This problem could have been solved simply by merging a couple of the action scenes together to form one huge battle, and the dialogue scenes condensed down a bit.

Expendables 2 then is far from perfect, and still not quite on the grade level that we are expecting. Fans of the first film should expect more of the same, only slightly bigger this time. The main thrill of course comes from just enjoying all the names together. A worthy action flick, but the parts are still greater than the sum.