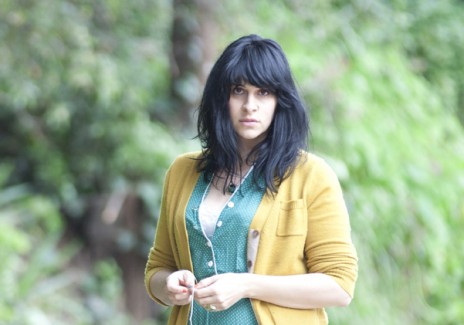 Our mailbag was detonated recently by a delicate and exceptional release from a little known US act called Angela Correa, better known as Correatown, who we’re tipping for big things. Glasswerk got down to brass tacks…

Q: An alien lands on earth. He doesn’t really know much about bands/artists and that – as he’s an alien. How would you describe you and your music to said alien?
I would ask this new alien friend of mine to please imagine that we could take a 45-minute ride in a clear plastic space travel bubble through the Milky Way. Imagine stars and shimmering bits of galactic refuse glimmering off in the distance, fuzzy warms sounds echoing in the space bubble, and all the while we’d be sipping vanilla malts.

Q: It’s 2012, the year of the dragon. What’s been your highlight of the year so far? It doesn’t have to be anything to do with dragons, but dragons are rad.
I love the Chinese zodiac, so I’m always pleased when Year of Dragon or Horse rolls around. I feel rather sad for friends that were born in year of the Rat, but what can you do?

I can’t commit to just one highlight, can you indulge me three?
This year has been flush with highlights —-> joining the Highline Family and having my album released in UK/Europe + elsewhere is truly wonderful. Getting to come over in September and tour WILL be a highlight I’m sure. I always meet so many interesting and memorable new people when I’m touring. I also took a trip to the Yucatan in Mexico and swam in a few blue green cenotes while tiny black fish nibbled gently on my toes. That was pretty rad.

Q: God calls you up, and he’s wanting to put on a show. Being God and all, he doesn’t really have time to choose bands, DJs or a venue. He’s put you in full control. Also – again, him being God and all – you can choose anyone alive or dead – he’s that good. Who’s playing and where?
With all the supernatural powers available to me in this scenario, I would put on a show that would never otherwise happen. The venue would be Oak Tree, a swimming area on the banks of Yuba River in northern California just outside of Nevada City that has large rocks for sunning and deep pockets of water for swimming. Only 100 people could attend because of space, and everyone would have to hike in 2 miles of flat walking stretch. I would make it folksy as all hell, a totally acoustic evening without electricity lit only by campfire and the stars, or something. The music would be Gram Parsons + Emmy Lou Harris, Django Reinhart, and Billy Holiday.

Q: What’s your favourite childhood memory?
I’m a Libra so it’s really hard for me to pick a favorite anything. But I have a very fond memory from childhood of sledding on those brightly colored, slightly terrifying, super fast round disc sleds. We lived up in the mountains near Lake Tahoe in a small town called Truckee, California when I was a young kid. My two little sisters and I always took turns going down the hillside with my Dad and I think we must have crashed out and fell off the sled more than we ever made it down the hill. But the best part of sledding was going home to make hot chocolate and churros afterward (a Mexican cinnamon-sugar covered donut like treat.)

Q: What were the first and last pieces of music that you bought?
I just bought the new Pony Boy single “Not In This Town” and the first album I ever bought was Purple Rain by Prince on vinyl.

Q: What bands/artists are there around at the moment that people aren’t listening to enough? Any tips for future stardom?
I’m a really big fan of Matt Bauer. He’s a super talented multi-instrumentalist with deep and soulful songs. I’m also a huge fan of Centromatic/Will Johnson. Holy hell- I love his music.

Q: What’s the rest of 2012 got in store for you?
The rest of 2012—-> The PLEIADES album release is my main priority at the moment and the tour supporting that through the UK and some European cities, followed up with touring in the USA is what I’m doing through end of October. I’ll be writing while on tour and hopefully recording in November and December when I get back to LA after tour, and hopefully a little time off to ride my bike and go for hikes in LA before it gets too terribly cold!

Q: That alien from Q1 is back – he’s just got his mitts on a computer, and he wants to find out more about you. Where’s the best place he can go to find out more and what should he check out first?
I share the random life projects, photos and music stuff on FB, Twitter and Tumblr. I also have a band website where I post lots of photos that I take, new lyrics, random shit and music news. And I use Instagram with all my sites because I’m currently obsessed with camera phone photography (ha ha).