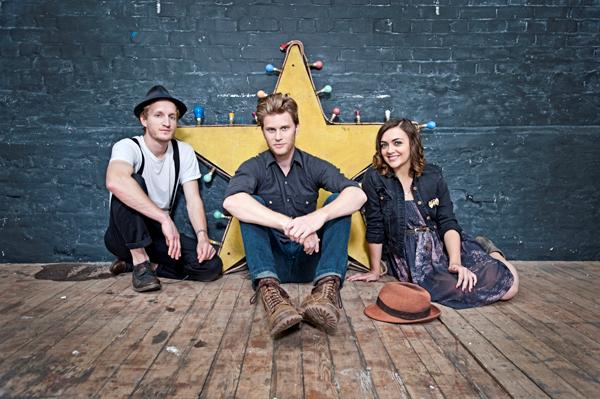 The Lumineers have just announced plans for a full tour of the UK alongside a show in Ireland and Netherlands in February 2013. The Denver folk-rock outfit, whose self-titled debut album will be released in the UK on November 5th via Decca Records, will play nine shows on the tour. Tickets are on sale now and we caught up with cellist Neyla Pekarek to find out more about the band:

Q: An alien lands on earth. He doesn’t really know much about bands/artists and that as he’s an alien, obviously. Aliens aren’t in bands. How would you describe you and your music to said alien?

First, I would tell this alien that my name spelled backwards is almost alien (alyen) so he would see we aren’t so different after all, and then I’d tell him that our music is best described by instrumentation: guitar, drums, piano, cello, bass, and a little mandolin from time to time. We stomp and clap and shout and tell good stories.

Q: How does it feel to be riding high in the US charts? Did you ever think you could achieve this level of success with the band?

It’s nice to have something tangible that says “you’re doing something right.” Packing up a minivan and leaving our jobs and homes and loved ones and going into enormous debt wasn’t such a crazy idea after all. I think we all believed in what we were doing, but this level of attention wasn’t something any of us planned on.

Dragons are rad. Have you ever had dragon tea? It’s been pretty popular amongst the band these days. Hot water, lemon, cayenne pepper, honey, and enough garlic to put Dracula in a coma. It’s supposed to keep us healthy for our travels, but I think it just gives us reeeeeeally bad breath. Bad breath, however has not been the highlight of my year. It’s been a bit of a whirlwind and most of the things we’ve done are things I wasn’t sure if or when I’d ever do them in my lifetime, and now they’re all happening simultaneously. Of those things, I think playing Red Rocks in Colorado was one of the most magical experiences of my life. Not only is it just the most amazing venue, but it’s home turf and rain was pouring and wind was blowing and in a crowd of 9,000 people, I was able to look out and see people I went to high school with, former coworkers from the restaurants I worked at, my mom, my friends. It was an amazing night.

I’m feeling a lot of pressure on this one. What kind of party is God looking for? If it’s a swanky speakeasy’s-on-the-sly, no wooden nickels, grab your dame and get the giggle juice flowin kinda shindig, then I think I’d ask Ella Fitzgerald to join us. Orrrr if it’s a chain smoking cigarettes, slamming whiskey shots, chipping front teeth kinda night, Guns n Roses circa 1987. Without a doubt.

I was a pretty weird kid and I had some pretty weird rituals. For a period of time around age 8, I would rush home from school and get out this face paint set that I had and I would draw a “bat scratch” over my eyebrow. I’m not sure why. I was also inventing a lot of alter egos at this time including Uncle Robbie, an ambiguous uncle with a big beard who chewed gum nonstop.

The first piece of music I ever bought was probably Debbie Gibson, Out of the Blue on cassette. My most recent purchase was Man Monster on vinyl from a really awesome Denver band called The Knew.

We had the pleasure of touring with this amazing band from Portland called Y La Bamba. They’re incredible musicians and people. Do your ears a favor and snag their record, Court the Storm. A few others that would make for happy ears: Paper Bird, The Outfit, The Knew (as mentioned above), Shovels and Rope.

Letterman this week, three weeks in Europe with The Civil Wars, three weeks back in the states with Dave Matthews, and then a nice long winter’s nap come January.

We’ve got all those social networking sites ablaze, Facebook and twitter and Instagram, oh my.www.thelumineers.com is a safe bet and we’ve got a pretty cool mailing list even aliens can sign up for and get emails from us! Yay! Oh, and my personal twitter is also floating around the interwebs, but it rarely makes sense and is usually extremely immature.

The Lumineers’ debut single ‘Ho Hey’ is in the top 40 on the US Billboard Charts, has started impacting the UK iTunes charts (currently at #79) and its video has amassed over 9 million YouTube views. The song is also featured in a prominent E.ON energy advertisement here in the UK.