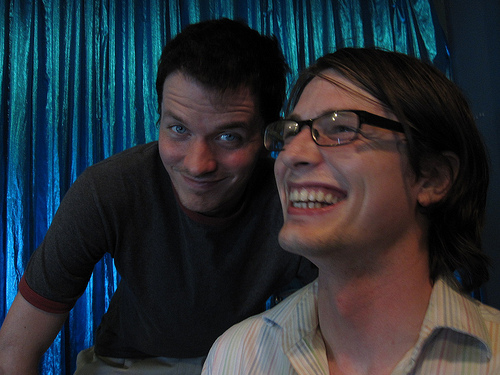 “I WANT TO WEAR THAT GLOVE” – ED SCHRADER’S MUSIC BEAT

For those of you unfamiliar with Ed Schrader’s Music Beat, firstly, I’d advise you not to expect to find a representative genre in which to place them, for their sound is a mish mash of punk-rock, spoken word poetry, Beastie Boys vocals and God-knows what else. You should expect, however, to be very confused at first, followed by emotions of discovery and enlightenment, before coming to the conclusion that this mob are clearly mental – in good way (think of Brad Pitt in Twelve Monkeys).

The band in its current form consists of the eponymous frontman Ed Schrader and his flatmate and now bassist Devlin Rice. Their debut record Jazz Mind was released earlier this year and soon both men will embark on their first European tour – a trip that will take them outside North America for the first time in their lives.

Prior to that forthcoming tour we caught up with both members (one of which was stoned) over email to discuss how the Music Beat came to fruition, and get some clue of the methods behind their ‘madness’.

Listening to your album is a terrific experience; No two songs sound the same, and you both sound slightly mad – discuss

Devlin: I like to think of Jazz Mind sort of like going through a day. There are moments of contemplation, moments of disbelief and rage but never one thing that dominates your thoughts. Is seems pretty normal to me.

Jazz Mind is terrific and can be listened to in around 20mins – bonus. How quickly was it to record and how easy was it to get released?

Devlin: It was actually a slow process. We had Twig Haper (of Nautical Almanac) record and Chester Gwazda (Dan Deacon, FutureIslands) mix it. There was a lot of scheduling difficulties so we ended up recording songs in a number of different sessions. I think that gives much of the dynamic in terms of the record itself; having to set up the mics all over again etc. Then it took awhile to find the album art – Nolen of Post Typography did a wonderfully job. Load was going to release it in the US for the start and then Upset the Rhythm came to us during the process and wanted to release it for you all in the UK/Eurozone.

Ed: This recording took so long that it started before I even joined forces with Devlin. The album which I was supposed to put out with Load was going to be originally just me and a drum – you know the rest. The whole thing took about 2 years and went through 3 different dudes, 4 different studio settings. This last one felt right. Getting it released was easy in the sense that I was on a label – that part was done, if anything was difficult it was making the decision as a group i.e. ‘when do we release this thing?’ – You can never tell, something’s always eclipsing you, hell even the sun is eclipsed sometimes, just ask David Gilmore .. OH BEHAVE!!!

How did you both meet and subsequently decide to form this band?

Devlin: Ed had been playing solo for about three years touring with just voice and the drum. He was asked to play a ridiculous showcase of Baltimore rock bands at this locally famous after hours club called Paradox. We live together and he came into the kitchen a week before this happened and said he wanted to try something different and asked me to join him on bass. It worked out well and we decided to start the band that night.

And how come Ed gets his name in the title?

Devlin: It sounds cool and he had established himself in a variety of mediums.

Ed: It’s all phonetics. I would have settled for Karl Pilkington’s got a
head like a fucking ORANGE! Or K.P.G.A.H.L.A.F.O.

Getting back to ‘not having of posing a dull question – who are your influences music-wise and elsewhere?

Devlin: I have been listening to a lot of Scott Walker and Sparks. Historically I love King Diamond, Devo, Misfits, Scorpions, B-52′s, Judas Priest. I guess that gives some picture, I am generally into riffs and how sounds come together whereas Ed tends to be more attracted to vocal performance and song structure. I think that also plays into how we write our songs.

Of your sound, you’ve said that “One guy sings and plays a floor tom and the other asshole plays the bass. It’s kinda punk.” Surely there is more to it than that? What about the influence of coming from Balitmore – which I’ve read is pretty rough…

Devlin: Yes I think there is more to it than that. I was just being cheeky. Ed’s a great lyricist and most of our songs start with lyric first and then kind of playing to the imagery and feeling in them, hence the variety of sound. As far as the influence Baltimore has, that can go a few ways. It is a really engaging town as far as art and music is concerned. I feel like folks that are making music and art here are not generally thinking about blatant trends and trying to replicate them. I’m not saying that people don’t know what’s going on or anything but it seems like people tend focus on making work that stands on its own, independent of those influences. Most people that you would talk to don’t live in the bad areas but that’s not to say the drugs and murders are not close by and a concern.

Ed: I’d say we’re like Birthday Party running into Michael Stipe on a guided tour of under water Antarctica given by Werner Herzog.

Ed, I understand you’re a writer also, do you hold aspirations to publish any fiction or…

Ed: I’m a Sports Writer, and I do Book and Film reviews for Baltimore City Paper.

I would like to publish some creative non fiction at some point, and
direct and write films. I am reading 1492 by Charles C. Mann right now. Some of my favourites: A Farewell To Arms, and A Light In August, The Brothers Karamazov.

I like an element of sentiment from time to time and to end, I wondered if there was a defining moment or memory from your life which propelled you into wanting to do what you do – create music, art etc….

Devlin: Seeing King Diamond. I was right in front of him and Andy LaRoque. I admire him very much. He has always done what he wanted to do and put total confidence in his persona and albums. Also reading the Beat writers of the 50′s. Post WW 2 America is always depicted as some golden age that has been taken away from everyone. Their writing exposed that everyone in fact wasn’t “living the dream”, that a picture perfect American life was rare and came at a cost, and that there was a way of being outside of it. Have enriched lives and adventure was more meaningful and spiritual than the bought and sold life of America.

Ed: I guess seeing a Michael Jackson Impersonator when I was 5 did it for
me, I want to wear that glove.