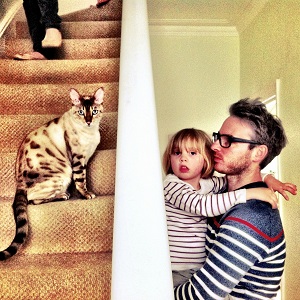 Multi-talented singer-songwriter Olly Knights first came to prominence as one half of Turin Brakes, one of the UK’s most influential songwriting acts. Fronting Turin Brakes, a band known for its well-crafted hits like “Painkiller”, “Underdog (Save Me)” and more recently, “Sea Change”, the duo built their legacy around penning tracks that overflowed with sentiment and conviction.

With the band currently focusing on their own solo projects, front man Olly Knights has this month offered us his debut solo album. ‘If Not Now When’ is Olly’s first step away from his band and captures a songwriter at his finest, allowing us into a world of personal reflection and showing a whole new level to the songsmiths talents.

Taking time out of his busy schedule, Olly chatted with us about his new record, taking the step into his first solo journey and going at it in true DIY style. Here’s what he had to tell us:

Hi Olly, how are you?
I’m tired, we went to see Tame Impala last night and had a late one, it was great though, me and the band all got excited about the sheer 1970’s prog nature of their set…

Where does this Q&A find you today?
I’m at home on my sofa, my kids are now finally asleep, it’s Halloween and my wife’s out on a film shoot. Might watch ‘The Shining’ and freak myself out a bit!

You have just released your first solo record, ‘If Not Now When’. For anyone who hasn’t heard the new album yet, can you tell us a little about the record and what we might expect from the new songs?
It’s a simple raw folk record, based around close vocals, guitars and layers of synths and pulses. The songs are what I’d describe as refined and so is the sound, If you dig people like Nick Drake or Laura Marling or John Martyn you might dig this, it’s pretty “English centric”. It’s subtle, it takes a few listens to unfurl. It’s highly personal and confessional but I hope emotionally rewarding to the listener, it’s a little different to my work with Turin Brakes, I wanted this record to be a reliable slice of slow brooding homemade warm atmosphere, one that you can return to when you want it’s particular mood, it doesn’t deviate from its own path, that was very important to me!

Can you let us in on your personal interpretation of the album title?
I was full of fear when I made it; the title was a challenge to myself essentially.

What made you decide that 2012 was going to be the year that you made your first step into solo territory?
The songs decided for me, they turned up and were too personal and odd for me to send to Gale, I just knew they were for me to deal with alone.

Does this mean an end to Turin Brakes?
No not at all, if anything it’s a sign of health for the band, Turin Brakes is in no hurry, were a pretty solid little unit, we only want to make quality and to be happy with our work as a band, the more work we can do alongside it the better, it all informs the creative process.

How was the process of writing and recording different from your time in Turin Brakes?
I learned how to operate an 8 track reel to reel, I wanted the recording process to be a bit of a mystery to me, I’d gotten to the stage where laptop recording was almost too familiar, I went on a true journey with myself, it was pretty magical and also incredibly intense, recording with the band is far more light hearted and jovial, it’s like playing a team sport where you know the other players incredibly well.

What songs are the most personal to you and why?
Basically all of them but I guess “Girls” and “I Hope I Know You Well” as they are literally about my family and home life and how I feel about existing here in this land.

You went through a bout of writers block leading up to the recording of this record. How did you get through that?
This record was the moment I got through it! I changed the tunings on my guitars and let go all expectation, I could only do that by saying to myself it’s ok not to write for the band, I’m free…

Your songwriting is very poetic and engaging. Where do you draw your inspiration from?
It’s a feeling of wanting to communicate the things that are somehow beyond words, a human feeling, this is why it’s all about the sum of the entire part of the song, not just the words of melody or sounds, it all builds to one souls take on the human condition, that hopefully many others can relate to, why does a line or a pause or a harmony bring goose bumps to someone’s skin? I have no idea but I know it’s possible. It’s been done to me by other artists, I just try to do the same, it’s comforting when it happens, like you’re not alone somehow.

How does Gale feel about your venture as a solo artist? Has he been supportive?
He’s been supportive by not giving me any head fucks at all, no guilt or confusion, just gentle encouragement from the sidelines, he’s a true friend of mine at the end of the day, not just a musical partner, same goes for Edd and Rob from the band, I think they were just glad to see me getting over some tough times as a writer and I’m glad to say they’ve all given the record the thumbs up in their own ways.

A documentary was made around the creation of your first solo venture. For anyone who hasn’t seen it, can you tell us a bit about the documentary and the purpose of it?
Well my good friend Philip Bloom is mad keen on making short documentaries about personal things, maybe stuff that could easily be ignored? He shines a big beautiful light on things, he wanted to do it and I trusted him, the reaction to the film has been amazing and given the album a real validity, it’s been wonderful hearing from people who only discovered the album through viewing the film.

You have released your new record on your own, without the backing of a major label. How does it feel to be doing it back to basics and completely DIY?
Perfect, no guilt, no head fucks and no stupid expectations, just the art and a chance that it can be slowly discovered by people and that some of them might really love it.

Will you be taking the record out on tour at all?
No I don’t think so, I might one day but that’s a whole other thing and not why I made it, I did really enjoy performing a few songs live on the radio recently with my wife, it was all just so natural, so yes perhaps some day if people still care, maybe if release something else and the next Turin Brakes album is finished.

What has been the most challenging aspect of recording a solo record and going out on your own so far?
Getting past my own self destructive fears, it’s been a major personal battle, some days I just thought I was going insane making all this slow methodical music but the end result is beautiful to me now. I’m glad I have matured enough as a writer to commit to an idea through thick and thin, I always had huge respect for artists who stuck to their own guns even if it meant losing some people along the way, the ones that stay with you are with you for sure.

What is the most important thing you want people to take away from your debut?
That there’s no need to be afraid of the dark 😉

What else is on your calendar for the rest of the year and do you have any surprises in store for fans in the New Year?
It’s all about the next Turin album now, I’m currently sending demos to Gale and the guys so hopefully soon we will start playing with the ideas, were all excited about what might happen.