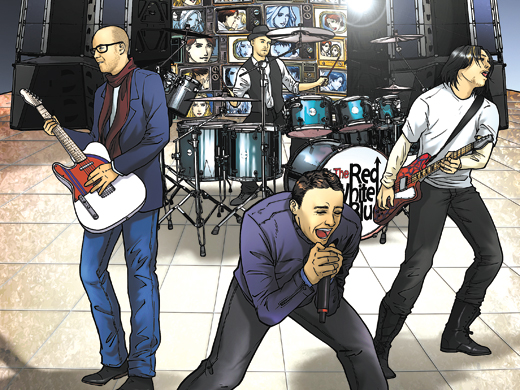 Interview: The Red The White And The Blue

The Red The White And The Blue seems to have come out of nowhere, how did this start? And where did the name come from?
It started with a Twix… Ed had just covered Brian Ferry’s ‘Let’s Stick Together’ for a Twix TV advert ( link ) and a friend put us in touch. We had similar ideas and demoed our album in Camden, which is also where ‘The Balloonist’ story starts. We needed a drummer and bass player and I thought ‘why not ask our favourite musicians to play?’. I sent our demos and the comic book ideas to Rick (Ash) and Taka (Feeder) and before we knew it we were all in the studio – it all happened so fast.

Our name gives a clue as to what’s in store as there’s something quite primary about the ‘colours’ of our music. We’re very direct lyrically and instrumentally, it’s musical pop art. Hopefully we are to music as to what Lichtenstein is to art – or at least that is the idea!

The band is different in that the members seem to be putting together the music videos, was this the plan from the start?
That’s important to us, yes. We’re the story tellers so we want to be the ones telling the story. It’s all home made.

You’re also doing something innovative by releasing a related comic, was this the initial idea with the music writing, or something that formed along the way?
After listening to our demos I noticed there was a narrative running through the songs, involving three characters and some key themes. A whole new world opened up and it was a case of filling in the gaps in the music and lyrics. All the songs originally came from real life experiences but collectively they combine to tell one story.

Your first released song, The Balloonist, had quite a distinct sound. Can we expect more of this with the further ten tracks you plan to release?
Yes – stay tuned! We’re really excited to reveal them each month.

As a band, we’ve only see you play live in animated form. Can we expect a live show in the near future?
We have to wait to play live as we don’t want to give the material and story away just yet -expect to see us in the spring!

We have to wait a month between each comic is released; is this the same for the songs?
Yes – each song is released at the same time as the accompanying comic book and they combine with the music to tell one story.

Will we see an album/compilation of the songs released on disc?
At the end of the story we’ll release an album and graphic novel containing all ten issues.

Finally, can you give us a teaser as to what we can see in The Balloonist’s future?
That would be telling! I can tell you it is a ‘proper’ story. We have an ending and everything has a meaning. The Balloonist is a story we just had to tell.