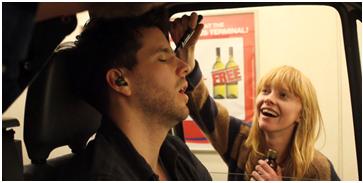 After falling in love with the latest singer songwriter to come from the heart of England at her recent headline show in Liverpool, we had to catch up with Lucy Rose and pick her brains on some important (and some not so important) matters…

Hello Lucy, where and how are you today?
I’m sitting on my sofa in my flat listening to Junip and I’m 23 years old and a bit.

What’s been the highlight of 2012 so far?
I think it was probably the London show on the last day of our tour. That was the biggest show I’ve ever played and the audience was amazing. We even had lighting.

How did you go about putting your (very accomplished) live band together,
and did they record the album with you?
They are all friends of mine. I met them at different times in different places and put them all together and made a family. They are wicked musicians and it’s been amazing getting the songs arrangements from my mind into reality. They played all over the album, I wanted everything to feel apart of it.

A lot of the songs on the album seem very personal and relationship centric – was the song writing a cathartic process?
Yes in a way it is, writing helps me process thoughts and feelings I didn’t even realise I had. I mean most the songs are about things that I would never dream of sharing with people, but there is a point when a song is a song and sharing it is the only thing you can do with it. I mean it’s definitely difficult at times.

What’s your favourite song on the record and why?
Such a difficult questions, I love all of them for different reasons. Shiver has a special place in my heart but songs like Lines show the music is a different way, it’s probably more experimental.

The video for Middle Of The Bed has about 1.5 million views. How does that
feel?
Pretty mad, I think it’s probably my sister’s computers on repeat.

You’ve been steeped in music from an early age – what fires your passion for
it?
There is something about music, which makes it dear to a lot of people’s hearts and that is really unexplainable. Music makes me feel something and sometimes I feel like I’m living in a numb shell. I need it to make me feel.

What are the best and worst things about touring?
The best thing is playing in a different place to a different crowd every night, it doesn’t get more exciting and interesting than that. The worst thing is the showers, man the showers in travelodges can be bad. A combination of power and temperature and I like to be able to get the shower head off the wall. I hate it when it’s stuck.

What was the last album you bought?
Tame Impala – Lonerism

If you and Jack Steadman had to create your own “Bombay Mix Tape” (see
what we did there?) what would be your top 5 choices?
I have no idea, I would have to discuss this with him and I think he’s in India.

We were at your Liverpool show the other night, excellent job by the way, did you enjoy that show as much as we did? It was in our Top 5 gigs of the year.
I’m honoured, top 5 is a serious achievement so thank you so much. I loved that gig, I’m sure you could tell. I couldn’t stop smiling at the end, it was a definite highlight of the tour.

How was the milk?
God I loved the milk (but it was a little warm.)

How did you come up with your very quaint merch and who blended your tea
and your jam?
It was just an idea I had about selling this blend of tea. It was really for me because I love it. It gets made in a little tea factory down South. The jam was because a friend of mine runs a charity called ‘Rubies in the Rubble’ link and they make jam and chutneys and it goes to an amazing cause.

What have you got coming up in 2013?
I’m not sure yet, hopefully more touring. I want to try and get the album out overseas, I think it’s only out in the UK and Ireland at the moment, so I’m just aiming for worldwide domination of course haha.

Finally, have your new trainers scuffed in a bit now or are you still feeling very conspicuous?
Thank god they aren’t as white as they were when you saw me. They were
blinding. They look satisfactorily scruffy now.