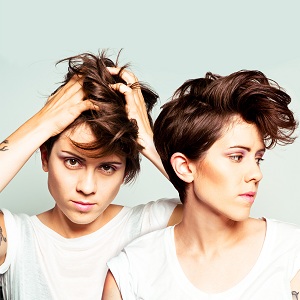 Tegan and Sara may not be a household name in the UK like they are in their native Canada but that is all about to change as the band, twin sisters Tegan Quinn and Sara Quinn, unveil their latest studio album that is perhaps more suited to the current ‘eb and flow’ of todays’ Brit pop scene.

‘Heartthrob’ combines a well-balanced blend of the duos early roots in indie-rock with a heavy dose of synth and high energy electro-pop that fits the songwriting style of the band probably more so than any of the acts previous releases.

While Tegan and Sara prepare for the release of ‘Heartthrob’, Sara sat down with us here at Glasswerk to talk about the new album and the bands plan of attack in terms of winning over the British pop market. Here’s what she had to tell us:

How are you Sara?
Outstanding! Thank you!

Where does this Q&A find you?
We are currently in New York City rehearsing and doing publicity for our album Heartthrob.

You are about to release your new record ‘Heartthrob’ over here in the UK on 11th February. Can you tell us a little about the new album and what we might expect from the new songs?
We think it’s a very strong record and a natural progression for us sonically. Aesthetically we wanted the album to have a broader appeal and we hoped that by pushing ourselves to be very modern about the instrumentation and arrangements we’d expand our sound and appeal! At the heart there are 10 very strong and emotional songs, but the album feels anthemic and muscular. I think it will be a fan favorite, but will also help us delve into new worlds.

‘Heartthrob’ is your first major release in the UK and already a buzz is being generated from the first single, ‘Closer’. Can you tell us the inspiration behind the track?
We wanted it to be a playful, flirtations song but still have a slight melancholy or nostalgia to it that would make the listener think of past relationships. I liked the idea that the song could be an upbeat part song while also having the lyrical and emotional complexity of our earlier work.

In Canada you are a household name with successful releases going back to the nineties whereas in the UK it must seem a bit like going back to basics? What is it like to tackle a new territory?
We’ve always enjoyed having a cult following in the UK so even though we’re breaking into new more mainstream territory we still feel like we have a foundation of support from our fan base. This has helped build our confidence to broaden our sound and try new things! We know most bands don’t stick around as long as we have, so in a way, “going back to basics” is a blessing in disguise. I hope this buys us another 10 years in the business!

What are each of your favorite songs on the new album and why?
I love ‘I Was A Fool’ (Tegan song) and I think it’s one of the best songs Tegan has ever written. It’s not flashy but I think it has the bones of a truly great pop song. For me, I feel most excited (today) about ‘Shock to Your System’. It’s really killing in rehearsals and I’m feeling great anticipation about unleashing it live!

How do you approach the release of a new record? Do you get nervous about fans hearing new songs?
I was very confident that our fan base would love this record, so I have been anxious for months to have the experience of playing the songs live! We have a really diverse group of people around us that I trust very much and I rarely feel afraid that the albums won’t be received well. I’m confident we’re adding some great new songs to the collection for our fans.

You worked with Greg Kurstin on the new album who has producer credits for the likes of Kylie Minogue, Kelly Clarkson, P!nk and Britney Spears. What was it like working with Greg and what do you feel you learned from the collaboration?
Greg was fantastic and an absolute dream to work with. His skills and ideas were out of this world and each day was so exciting for us. He works with great confidence in the pop world, but he also is a ridiculously talented musician and has years of experience touring with bands (Beck, Bird and the Bee) and producing more left of center bands (The Shins)- so that allowed him to collaborate and work with our different styles and songs with ease.

Talk us through your songwriting process? Is there a role that each of your plays when it comes to penning new songs?
We spend most of our time writing separately, so we both play more of a producer/editor role with each other. Once a song is finished I will send it to Tegan and she will make suggestions about arrangements or melodies and I will go back in and tinker with it until we both think it’s strong. Tegan sent a lot of her songs for this album without bridges and I ended up collaborating and writing a few of them, which was an new way of working for both of us.

How do you find your UK audience compared to fans back home in Canada?
Each audience is different for sure. Our audience in the USA and Canada tend to be very devoted and quiet. In Australia and in the UK I find audiences drink more and sing louder!

Your catalogue began in much more indie oriented waters and that sound followed you for a number of years before you decided to incorporate a much more new wave/synth-pop sound to your albums a few years into your catalogue. Was that a direction that you had planned or was it a natural progression for Tegan and Sara?
It’s all been very natural. Some of it is about expanding our sound, and sometimes it’s about the influences from our past or from music we’re listening to now. I remember with ‘the con’ I was obsessed with Justin Timberlake’s album ‘futuresexlovesounds’. Now- most people wouldn’t hear that influence in that album, but that was ALL I was listening to or thinking about. In a way some of the textures and transitions on that album inspired me at the very foundation of my songwriting!

Do you feel any kind of pressure to conform to the ‘in’ sounds of modern music at all?
Not really, although I do feel inspired and excited by modern music and recordings. So, if there is any pressure, its more about competitive desire to take those ideas and sounds and put them through my own filter.

How is it to work with your twin? Are there any challenges that you come up against – any sibling rivalry in the band?
We started writing songs when we were 15 and we are now 32. Over that very long time we have definitely experienced periods of conflict but overall we treat this band and one another with a lot of respect. We’ve gotten pretty good at being collaborators and business partners!

What aspect of being recording and touring artists would you say is the most rewarding for both of you?
In a way all of it has its pros and cons. I love to write and record, but I can’t imagine living my life without the thrill and satisfaction of performing live. I just try and get a healthy balance of both.

I recently interviewed Lisa Loeb who you wrote two tracks for on her upcoming album and who praises your work in music. Who inspires both of you?
Lisa is so wonderful! I feel inspired by artists like Patsy Cline, Bruce Springsteen, Alicia Keys, Justin Timberlake, Madonna, Annie Lennox, Tom Petty, Flying Lotus.

Are there any plans in the pipeline to write for anyone else?
We love to collaborate and work with other artists, so there is always activity in the pipeline! : )

Aside from the new album which I am sure will keep you both very busy, what else have you got planned for 2013?
TOUR TOUR TOUR!