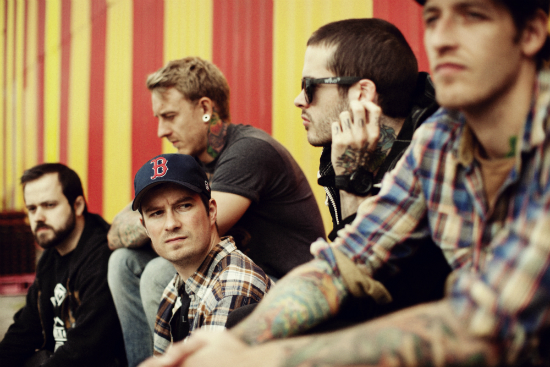 Glasswerk meets: Funeral For A Friend

With their latest album Conduit still ringing fresh in his ears, we sent our man Alex Fisher to speak to Funeral For A Friend vocalist Matt Davies-Kreye about their industrious and lengthy career as pioneers of the UK rock revolution, and what it means for them to be back on the road in the wake of this new release.

You’ve had a long and successful career in music that many bands don’t get the chance to have. What qualities do you attribute to that success and what do you feel keeps the passion alive and creative process fresh?
To be honest I’m not 100% sure, maybe it’s our stubborn attitude that’s held us in good stead over the years. We basically make music that we enjoy playing, I think if that aspect wasn’t fun anymore then we’d probably stop but so far so good.

You’ve been quoted as saying your new album (Conduit) is ‘extremely direct and gritty’ and you can hear a more prominent Hardcore backbone within it. What inspired you to go in this direction?
I think that the inspiration came from listening to the band we were when we first started releasing records and understanding that the kind of aggressive, in your face music is what drove us to be in a band in the first place. We kind of lost sight of that over the years. I think we all feel like we have this band finally back on track.

Pat Lundy’s Influence on Conduit is quite apparent. What has the transition been like between Pat and Ryan Richards?
It’s been pretty seamless. Pat is super confident and an incredible asset to the band, just his style brings a different level of attack to the songs old and new. His enthusiasm is also a key component for us, he’s all about the PMA and it’s really made the dynamic in the band more relaxed and enjoyable.

You chose to work with producer Romesh Dodangoda again on this album. What qualities keep you coming back to him?
The reason why we chose to work with Romesh again with this record is because of how easy going he is and how he strives to capture the energy of the band playing. He’s really receptive to how we work and take the time to suggest little things here and there that we might not initially think of, he’s a very dynamic producer to work with as he really get’s both sides of our bands sound.

You chose to use the artwork of former FFAF member Matt Evans for the cover art on Conduit, How does it feel to be able promote his work?
It feels great to have Matt back onboard in this capacity, he’s an amazingly talented dude and it was pretty cool to have his work feature on the record. It really helps give this record a visual identity that’s unlike anything we’ve done before which is really important to us.

How much of the records that you make are influenced by what the fans want verses what you want? Do you make records for fans to enjoy, or make it and hope they like it, or is it a mixture of both?
Honestly, we’re really selfish so everything we do we do for ourselves. We’re the kind of band that has to like what we do otherwise we won’t do it. I appreciate the people who like our stuff but they don’t sway our opinions of our music in the writing and recording processes. We’re defiant about that, I think it’s important for bands to please themselves creatively. I don’t think you should ever make a record for an audience. To me that’s selling yourself out.

Which album, of those you have written, means the most to you personally?
I like most of our records, particularly the new ones but the one record of ours that means a lot to me on a personal level would be Hours. To me that was a breakthrough, artistically and personally. Getting to work with Terry Date was one of the most amazing experiences I’ve ever had making a record. He really taught me a lot about myself and my ability. He also taught me to not be so hard on myself all the time. I would love to work with him again, he’s one of a kind!

Over the years you have been given titles such as ‘Best British Band’ and it is said that Casually Dressed & Deep in Conversation is one of the landmark punk records of the 2000s. How much do those titles hang over you? Is it a positive thing or in your opinion does it produce a certain expectation of you?
It’s pretty humbling that people think that about your band and stuff you’ve done. It’s completely out of our control but we respect how important it is for a lot of our fans.

You’ve had the opportunity to tour with so many bands over the years, all of different statures genres and fan bases, are there any bands you’ve watched, who you’ve thought ‘I want to be like those guys’?
Yeah, for me it’s always been Boysetsfire. That band are my number one and seeing them play is really inspirational, such a great band!

If you had to name one band, what band really gets you going at the moment?
Hmmm… I would have to say, Oathbreaker.

What do you think is the most important thing to have changed in the industry over the last 10 years?
The internet without a doubt. I don’t think the industry fully grasped the power of such a life changing tool until it was nearly too late. With downloading and now digital releases it’s changed how we treat music and bands.

You’re starting an extensive touring calendar from 23rd January are you looking forward to being on the road again after a brief break?
Definitely, we’ve been off the map for the best part of a year getting the new record ready so we’re itching to get back out on the road and in people’s faces again!