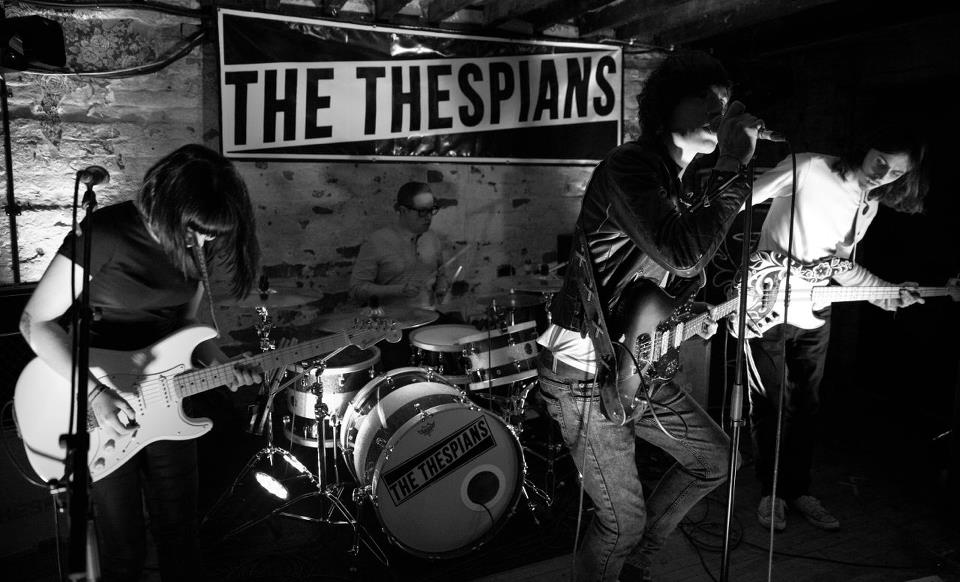 The Thespians are one of Liverpool’s most talked about bands. Since forming in 2010 the band haven’t stopped gigging, forming a solid following in their city and have caught the attention of numerous bloggers and had international recognition from the likes of MTV New York. With their latest single, Under Siege, released at the start of February, we spoke to Paul from the band about their story, and plans for the future.

How would you guys describe the music that you make?

It’s always a tough question this because obviously people come to you with suggestions with little bits of influences they can hear, but the concept for the band originally was to…make a really good sounding shit band (he laughs)….which sounds funny but you know the kind of band you made in school where you just get in a garage and you make loads of noise and it’s loads of fun?! The concept was just to keep it like that but with good songs and arrangements and stuff so you know, it is garage rock and we wanted it to sound ruff and ready and not be perfect, you know the vocals to be a bit rough in places and the lead guitar to be a bit messy and the odd scruffy drum fill and things like that but to have good songs at the heart of it.

It’s been a couple of years since you guys got together, and quite soon after you started you had a lot of hype around you didn’t you?

It was really weird it just happened so quick, we did a couple of demos, some of which have ended up on the album. So we put these demo’s up (online) and MTV New York approached us and said “we really like the songs, we want to license them and play them on mtv” and we were like….”shit!” So from that other people started getting on board and we started getting messages from all kinds of different places and industry people and getting booked for really good gigs. It just happened really quick. We weren’t really ready to be honest but we just got in a studio and wrote a load more songs very fast!

What have you been doing since then?

We’ve literally not stopped gigging and writing because we just wanted to do as many gigs as possible, good gigs. So we started off doing some o2 academy shows and then we got asked to do some festivals and then we got actually booked to headline some festivals, local ones. Inbetween then we just demoed and demoed and demoed the songs and we wrote 30 tracks for the album…and then a producer came along and then we did the pledge music thing to fund the album. So it’s just been a roller coaster really just wanting to get better and better and get more and more people involved.

What’s been your highlight so far then?

There’s been a couple of outstanding gigs for us, we played Chester Rocks festival with Iggy + The Stooges headlining and that was just a phenomenal gig for us. We went on stage and there were about 500 people in this room that could hold about 1500, and by the second song it was like full! And that is the gig where we actually got our producer and our manager from. That was the gig that sparked it off.

You’ve had a lot of grass roots support in your local area, how important do you think that’s been to finding success as a band?

You get told by everyone in the industry that you need to build up a good following in the city that you’re from, and I never really knew how important that was or how to do it or anything, but with The Thespians we just seem to attract local attention. You never really expect people to be talking about your band but soon I found out that everybody was. I genuinely didn’t know that at all and it came as a massive shock to me! I don’t know how this hype built up and it’s crazy but we’re so appreciative of it. However successful we are I never want to become a band that thinks they’ve done everything they need to do and that they’re as good as they can be. It’s always about getting better.

What do you think about guitar music in the mainstream at the moment?

My opinion is that guitars have never stopped being cool, and there’s always been great guitar bands out there making music. They’ve maybe had to wrap it up and produce it in a certain way so people can connect to it at the time to tick the boxes for the industry but you are hearing alot that 2013/2014 are the years for guitar music to make a comeback, you know, and if the NME are saying that and the BBC are saying that it’s pretty important for how people look at bands. you’ve got the Vaccines, you’ve got Parma Violets who are making waves and stuff and they’re proper guitar bands in my opinion just like The Libertines and The Strokes and the Arctic Monkeys were. I’m glad that bands are coming back round that way, it’s really cool!

You’ve just recorded your album and you’ve been recording with the help of pledge music – how’s that process been for you guys?

Pledge Music was brilliant but in all honesty I’d never heard of it. We put our project up there and came up with a load of exclusives as they call them, you know packages that people can buy. But it was brilliant, 156 people pledged in 90 days and we made 110% of our target! So we were just blown away by all of the support from all around the world – we were like “wow – people we’ve never even met just giving us all this money!”.

Are you happy with what you achieved with the record?

Yeah, really happy. It was tough because I actually got laryngitis half way though doing the album! We recorded the whole at the same time because we wanted to do it as a band…but is was rewarding because literally you could do a take, then walk into the other room and hear exactly what you just did as a full band and that was really exciting instead of just doing it bit by bit. But because the amount of spill that would have been in the same room as the drums and guitars and everything make a vocal sound is not very nice, so our producer said do all the music, and then do all the vocals on top. So it came to me doing the vocals and I got laryngitis! It was funny because our producer’s wife is a nurse, and she came in and was like “…Paul doesn’t sound very well…”. So I had to go away for a week and rest and then come back and do the vocals.

We’re playing the Delta Sonic label’s night on march 2nd, then main support at Thresholds Festival on the 10th March, playing main support at X and Y Festival in July, we’ve got a Japanese deal which is being finalized in the next few days and we’re releasing the album on the 27th March in Japan on Vinyl Junkie records, and we’ll be doing a small UK tour as well to promote the Japanese signing and also put another single out. We’ve not decided what it’s going to be but we’ll sit down in the next few days and work that out. And also Rough Trade are on board now and stocking Under Siege, the 7” vinyl and we’re in talks with them as well! We’ve got some great things lined up and I just can’t wait to get back and do some more songs, I’m itching to do a new EP!