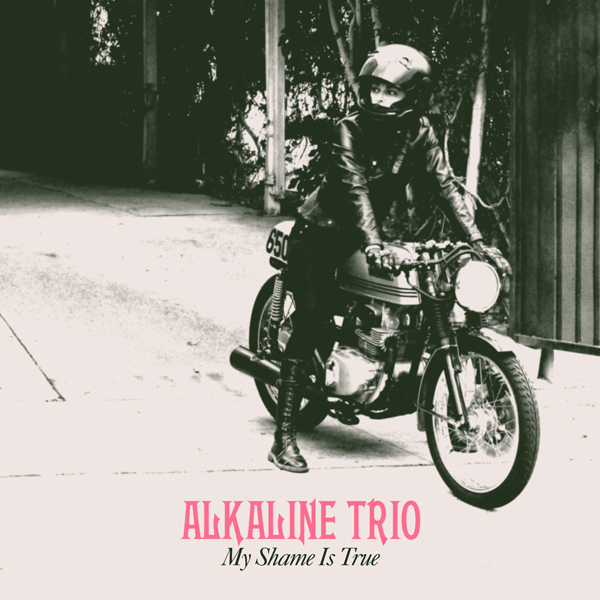 Alkaline Trio – My Shame Is True

Matt Skiba has a knack for the minute details. Examine a handful of Alkaline Trio songs and you’ll notice a thread of melody, phrasing and lyrical content that walks a very thin line of repetition where miniscule alterations prevent material from ever feeling too rehashed, even though direct lines and chord changes are transplanted from song to song by his expert musical surgeon’s scalpel.

It’s this ability to crank out album after album of what is, essentially, the same song that has made their career. Listening to My Shame Is True is a déjà vu experience – you’ve heard all these tracks in another form on another Trio record somewhere in the distant past, but it’s hard to care when the songwriting is of such a high standard. The wonderful ‘Midnight Blue’ with its 50’s slap-back drenched vocal echoes of “It came just like the rising sun, the shame of everything I’ve done” is another perfect slice of melancholic pop punk from the seemingly bottomless well of Grade-A songs that Skiba seems to dredge his material from.

It’s a wonder with such a long lived and burgeoning career that the band still find anything to be glum about, but the trademark black comedy that pervades Trio’s material is still abundant, as is their now signature production sound. The diversity that echoes through the twelve songs here, not least to mention the incredible musicianship on display on ‘The Temptation Of St.Anthony’, should serve as a huge middle finger to anybody who sees this band as a three-chords-and-the-truth outfit, proving that whilst Trio can play with the best of them, it’s their restraint and mastery of simplicity that marks them out from the pack.

Bass player Dan Andriano seems to take more of a vocal back seat on this release which is a shame as his distinct tone lends itself well to foreground duties on previous releases and makes a nice distinction to Skiba’s less gruff range, though ‘Torture Doctor’ and ‘She Lied To The FBI’ are classic Skiba anthems that were custom made for his down-and-out list. Elsewhere towards the tail-end of the album, ‘Young Lovers’ finds the street folk sounds of contemporaries like Dave Hause and Vinnie Caruana creeping in and provides a pleasingly stripped back, honest and humble side to the band that is rarely glimpsed.

In truth, this is one for the fans. Unfamiliar listeners should still be reeled in by the belting songwriting and high production value and die-hards will find plenty of new favourite tunes, but anybody still stuck in Alkaline Limbo won’t find a lot here to drag them out. Perhaps that’s where the appeal of this band lies; once you’re hooked, they’ve got you for life, and for this reviewer My Shame Is True is another more than welcome addition to the Trio’s catalogue.