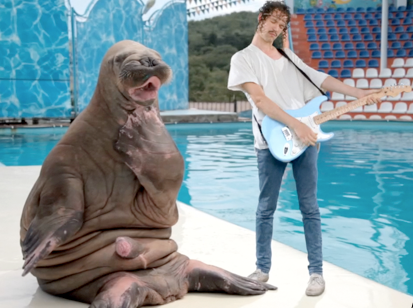 You stormed onto the scene in 2010, notably with the song Radar Detector and now you have a new album out – Songs for Imaginary People. What’s gone on this time?
I’ve taken lot of walks. I left new york city and moved into the mountains to take some time to myself to get grounded. But I also got bored and I got into trouble. I started some relationships I shouldn’t have started and now i have to end them. It’s okay to do that i guess, it’s fun to be desired and wanted – I was never desired in high school. I had pretty bad acne.

Personally, I can only describe your new album Songs for Imaginary People as just that. It’s poppy, its dancy. It definitely takes you on a journey upon listening. How would you categorize it?
Indie pop rock. Basically.

Lyrics are very prominent in your music and you have a history in rap – what are your greatest influences when it comes writing?
Recently, what influences me is a friend called Chelsea. She’s a poet and I fell in love with her. I’m influenced a lot by her poetry and her style.

Your sound has changed since your self titled album. Was that a conscious decision or do you just feel it was a natural progression?
I guess it was a mostly conscious decision. I think I limited myself to smaller power on the first record so i wanted to do the opposite with this one.

You studied philosophy, and whilst listening to your music, I feel that comes through – is that intentional?
I wish that all songs could have philosophical undertone. I love music and I love philosophy but they’re hard to put together. Whether I’m any good at it, I don’t know, that’s up to the listener. People seem to like ‘Constellations’

Whats next for Darwin Deez?
I dunno, i don’t know where i want to live. New York is expensive and I feel like I could do better. I want to stay near my parents, especially when they’re older and I want to be a part of my sister’s child’s life. If I was to move far away there would be too many logistical problems. I hope there will be more albums. I’d like to try stand up comedy. It’s hard but I like a challenge.