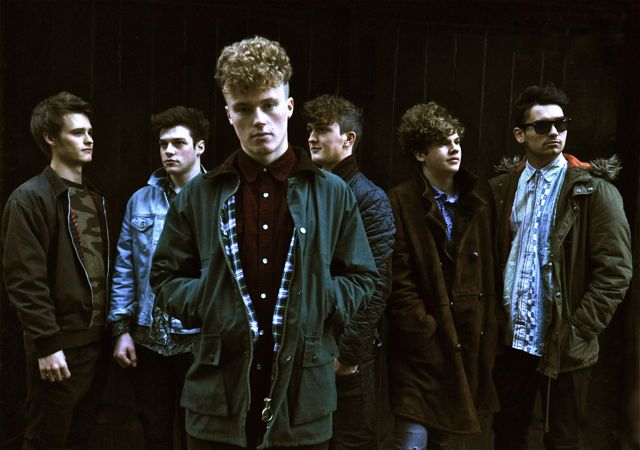 Since the release of the critically acclaimed Young Kato EP in the summer of 2012, Young Kato have been touring the UK tirelessly with headline shows across the country and successful support slots with a wide array of bands, including Spector, Bastille, Swim Deep, We Are Scientists and Peace. The band also featured heavily in the first episode of the new series of Made in Chelsea with a superb performance that took their debut EP soaring up the charts. The Young Kato EP hit #31 in the main iTunes album charts as well as breaking into the top 10 of the Alternative charts. and re-entered the album Top 40 for a second time this week.

Glasswerk had a chance to catch up with lead singer Tommy, who had this to say of the goings on within the band.

Glasswerk: You guys have gone from strength to strength since the release of your Young Kato EP last summer, what do you attribute to that?

Tommy: It’s an incredible thing how our debut ep, recorded in a shed outside of
Guildford has sold so many. I think looking back at the tracks Gordon
(producer) has helped to bring out the true pop elements of our songs. It’s
warm, colourful, fresh and easy listening.

Glasswerk: Your current single, Something Real, features Tommy being put through hell. Will we be seeing this again in later videos, or have you had enough?

Tommy: The director told me to prepare for a brutal 3 days of filming and he wasn’t
exaggerating. I’d prefer to keep our videos as exciting as possible so if
need be I’ll get back into the sea.

Glasswerk: You guys are still incredibly young – do you see this being something you
will be doing for a while?

Tommy: Music is such a fast and ever changing industry so you never know how long you have. We just need to enjoy everything we’re given for the next couple
of years, and build a foundation for a great future.

Glasswerk: You’ve recently announced a string of headline UK tour dates, what can we expect from these shows?

Tommy: People should expect an exiting, fast and powerful set. We will play the 6
songs available online from the EP, to the latest release for everyone to
sing along to. The set will have other new tunes we hope they will love that
could potentially sit on our debut album.

Glasswerk: Is there any show on this tour that you’re particularly looking forward to?

Tommy: Certainly London! It’s incredible how we’ve sold it out at over 250 tickets
in the capital. Also I’m looking to the dates up north; with the wonders of
the Internet etc it will be good to see how many people will be singing
along.

Glasswerk: Have you written any new music? Is there a plan to release new music soon?

Tommy: We have a promise of an album which is amazing for us. There is a plan in
place for the release of our album and we won’t rush it. The first release
is always important so we will get it right.

Glasswerk: Do you have any fond experiences from previous shows?

Tommy: Earlier this year we embarked on our first little tour in January.
Unfortunately with there was heavy snow so our Gloucester date almost was
cancelled. We were going to play it even if the world was ending. It was
amazing to see how many people came and braved the weather. We smashed the
set and had a huge confetti cannons set up for the final song.

Glasswerk: Finally, What’s the plan for the rest of the year for Young Kato?

Tommy: After this tour I think we’ll shower, and then get back into the studio to
test the water with different producers etc. We also have some little
festivals over the summer including YNot Fest, Barn on the Farm and X&Y
which we are excited for!

Already gaining national airplay from Absolute Radio for the single as well as being featured on 4 Music and Topman’s now must-have tastemaker Mixtape, Young Kato recently signed by BMG for both publishing and records and headed straight into the studio with a fistful of killer demos and producer Gordon Mills Jr. With an average age of just 18, Young Kato have continued their knack of writing incredibly danceable, synth edged indie-rock and rapidly produced three potential singles in those first recording sessions.

The remaining dates of their headline tour are:

For more information, you can check out the bands website here: www.youngkato.com