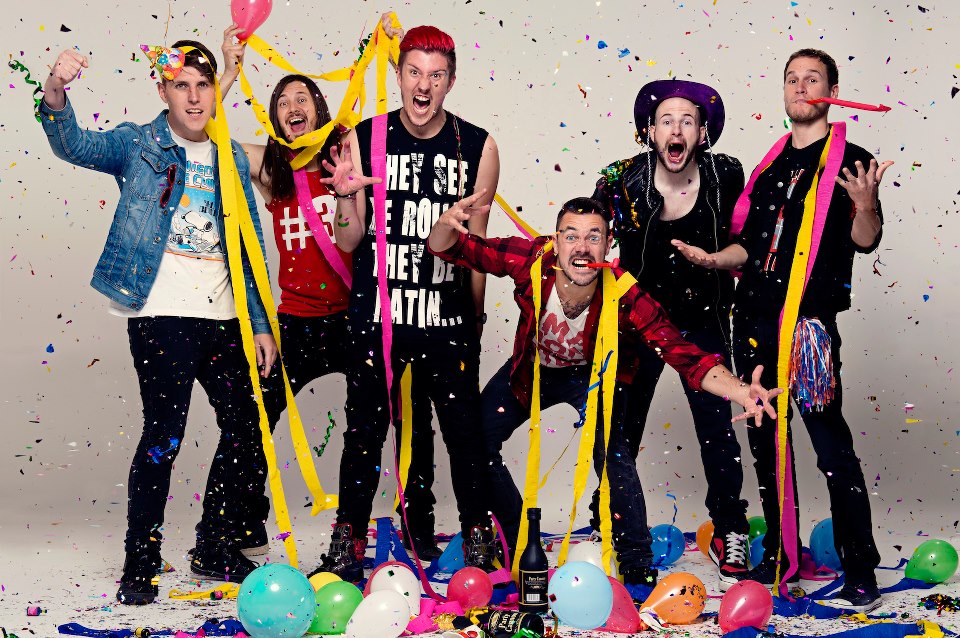 Continuing our coverage from Takedown Festival in Southampton and in the third of a series of reports from the weekend, our girl Zoe Edwards chats to Sean Smith and Gareth ‘Snoz’ Lawrence of Welsh rockers The Blackout.

Have you been here long at the festival? Checking out any bands?

Gareth – I saw a band in a little room, called Sub something, they were wicked!

Sean – They had a double bassist and dub step samples. I wanted to see Idiom, who are on right now! But I’m doing this sooo…

Oh I’m sorry, I wanted to see that too! I spoke to them earlier, lovely guys. Shall we just sack it off and go?!

Gareth – Well that’s the problem with bad bands, they’re all lovely guys! Yes well we’ve got a single coming out with them and Benji from Skindred. We’re filming the video for it here later!

Are you looking forward to playing later?

Gareth – I went in the room just now and it was fucking boiling, fucking boiling. I’m panicking now because I feel like I’m wearing too many clothes. I’m going to have to just wear a vest.

Sean – Tops off time. He only ever wears a vest on stage, we call it European Naked. Being bottomless but with a top on like. And that’s how he plays drums.

So it’s like news readers when you always think they’re naked underneath?

Gareth – I’ve never imagined that news readers are naked underneath.

I always like to think that they’re cacks off under the desk.

Gareth – I like to think that one might be noshed off one day. I don’t know if you can say that, I have. Some one just sneaks under the table and finishes them off like.

That’s why they’re shuffling their papers.

Gareth – Huw Edwards…”that was the news, now on BBC One we’ve got hiuhfkhfkjfl” haha

Congratulations on your Kerrang! nomination for best live! How does that feel?

Gareth – Excellent! Especially considering we didn’t really push for it, we didn’t tell anyone to vote for us. But yet we’re still nominated…something’s gone wrong here I think!

Sean – They probably meant Black Veil Brides twice, never mind The Blackout. I think we might be the only band that play live.

Out of the nominations?

Gareth – Out of that list there aren’t many people who don’t use backing track…so how live can you be?

How live can you be when you’re not even live?

Sean – Exactly. You watch us later and you can tell we’re not playing to a backing track because we go from one speed to the next to the other! You’ll be like “Oh this band is really shit! Look at that fat one with the pink hair running about!”

Don’t be so down on yourselves, there’s still a good chance!

Gareth – How do you compare to Black Veil Brides’ fanbase, whoever else, Enter Shikari and Of Mice and Men’s thousands of fans?!

Your fans love you too!

Sean – Nahhh they’ve grown out of it now they don’t like rock music anymore see.

Gareth – Our fans are people who hate us.

So all around the world, out of all the different places you’ve been, what’s your favorite place that you’ve played?

Sean – G’day! Just talked to my friend Mario who’s just got back from Australia, he’s a gay, a full gay

Sean – And he went to Australia and he had 5 men.

Gareth – In one night.

Sean – In one night.

Gareth – In one night.

Sean – He couldn’t wait to tell me when I got in the room, he’s was like “I’ve got a story for youuu”…and he told me a story about a man…watching him poo. I’ve said too much, I’ve said enough.

(Squash game gets much louder below)

Sean (to the squash players) – DO YOU KNOW NOTHING OF MEDIA?!!

That’s alright, we can sit down if you like, try and squash it out?

Gareth – Can I take the microphone with me to pee?

…Maybe not. Where’s the best place for an after party?

Walked right into that one didn’t I?

Sean – Everyone’s invited. He’s been there.

Gareth – I can’t argue with that, I have.

Staying for the after party tonight?

Gareth – We’re on at 9.55pm so at least half the band will be falling asleep on stage!

Sean – And’s he’s just had a baby. Well not him. His girlfriend.

Gareth – Right, you may not remember this but when we were young you’d always look in a bush because you’d always find a cock mag in a bush.

Sean – Of course! That’s where we keep it!

Gareth – Nothing on the shelves, it’s all in the bush!

Or a sticky mac…

Sean – Mario was telling me about a sticky mac…I won’t go into it.

For Start the Party and a couple of other videos you went to ibiza..any other summer jaunts planned?

Sean – Do you know what, we’ve got so much time off I’ve thought about going away. Basically Matthew Pritchard who’s on the cover of our album is the most insane partier I’ve ever met. He loves partying. So he’s doing boat parties out there and I think me and my friend Scott might pop out.

Gareth – We’re also going away for a stag do at some point. We just want to get together and have a piss up! Although I don’t drink anymore but I’m still going to have a laugh with a lemonade.

Sean – He still takes heroin though.

You’ve still got to shout ‘wwaahheeyyy stag stag stag’ all the time though!

Gareth – Oh yeah. And get one of those t-shirts with a stupid name on the back.

Do you have a pre-gig ritual?

What advice would you give to new young bands?

Sean – In the words of Liam Gallagher, “stay the fuck out of my way”. That’s my advice. Don’t bother. It’s impossible. It’s more impossible now than it’s ever been.

Sean – Oh look, there’s a free apple core over there!

Sean – We played a show for apple not long ago and do you know what we got?! FUCK ALL!

Gareth – All we got was a bottle of water each.

Sean – No…Steve Jobs had just died so I guess they were pretty pard done by. What do you think he’s buried in? An I-Grave?

Gareth – He just comes back whenever he likes

Do you think that was his name around the office?

That’s exactly how it was. Are you listening to any new bands at the moment?

Sean – Canterbury should be the biggest band in Britain.

Gareth – They should. I don’t know why they’re not. Die Antwoord are brilliant.

Sean – I’ve been listening to a band called Crazy Licks. They’re a swedish band who sound like all the cock rock bands you’ve ever heard, like extreme Poison, Motley Crue, Def Leapord all poured into one. It’s brilliant. I love that shit!

Finally, what’s coming up, what’s next?

Gareth – Our manager is trying a new technique. Seeing as we’ve got a new album out, he’s like, ‘how about not playing’. We’ll see how that works out!

Well thanks guys, hope not playing goes well! Have a nice piss.