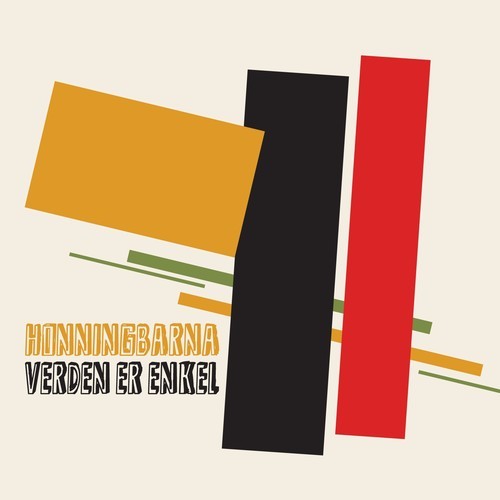 It’s not easy to review an album when it’s sung in Norwegian and you don’t understand the language. So my thoughts on young Norwegian punks Honningbarna’s album Verden Er Enkel (which I’m told translates as The World Is Simple) might be a bit limited.

This is the first Honningbarna album to be released in the UK, and the band’s second overall. Their debut album “La Alarmane Gå“ (Sound The Alarm) won the Spellemannsprisen award (the Norwegian Grammies) for Best Rock Album in 2011, and they also picked up the Best Newcomer award. In their early twenties, the band have already come a long way, and have also had to cope with the tragic death of their 20-year old drummer Anders Askildsen Eikås in a car crash. The band thought of giving up, but instead decided to carry on making music in his memory.

Honningbarna are a band who don’t compromise. They first came to prominence by winning an annual Norwegian music competition with a song called Borgerskapets utakknemlige sønner (“Ungrateful sons of the bourgeoisie”) and their political messages include strong support for the Palestinian people. And they refuse to sing in English; well it’s not their language after all.

There are thirteen tracks on Verden Er Enkel totalling just over half an hour of blistering music. If you like punk music or indeed anything towards the heavier end of the rock spectrum, then you will love the amazing energy and passion that these guys put into their music.

The album starts strangely with a burst of laughter followed by an ominous countdown. But then a massive guitar riff and the first vocal scream gives a good indication of what is to come. It’s hardcore style in the main, with shouted lyrics and some brilliant guitar work as the solos scream over the heavy beat. The backing vocals create huge chanted choruses and you don’t need to know what they mean to find yourself trying to sing along.

Edvard Valberg has a mature sounding voice and displays a great vocal range, doing much more than simply screaming his lyrics. He also plays cello, but to be honest it gets lost in the mix most of the time. The twin guitars of Christoffer Trædal and Fredrik Justnes switch between massive riffs and solos that would not be out of place on a heavy metal album. And the powerful rhythm section, Nils Jørgen Nilsen on drums and bassist Lars Emmelthun create a strong platform to anchor the music.

Honningbarna have already built a reputation as a thrilling live act. They will be playing at The Great Escape in Brighton later this month. On the basis of this fiery album release they should be well worth checking out.