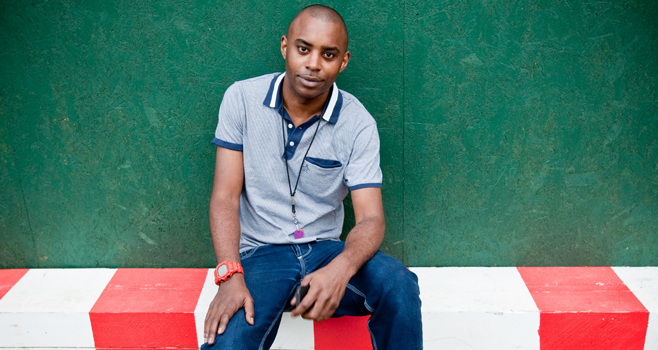 Glasswerk reporter Roisin Deady caught up with Jovel Walker, AKA ‘Random Impulse’, whose genre mashing style and innovative approach is turning heads left, right and center. As he prepares to release his debut album through Brille Records, we chatted about his diverse musical inspirations, shooting the video for his latest single ‘Best Party Ever’, to smashing a guitar on stage at Wakestock! Here’s what he had to say:

For our readers who maybe aren’t too familiar with your work, can you tell us a bit about how you got started?

I started out as a rapper and sampled a Vines track called ‘The Heroine’ on one of my mix-tapes. I really wanted to make a song like that without having to use samples, so I started to learn the guitar, drums and bass and starting experimenting with different styles. So yeah it all took off from there really and now 2 EP’s later, I’m set to release my debut album.

Your style is described as a hybrid of Hip hop, Grime and live instrumentation. Who were your musical influences growing up that impacted on your multi genre style?

I believe you learned to play guitar yourself with the help of YouTube. Is that an element you always wanted to incorporate into your music style?

Not so much – going back to that Vines track I sampled, I wanted to be able to do this myself. At the time, there was this documentary on about Jay Z and he was talking about the type of music he likes and listens to and how that influences his style. And it got me thinking, the music I listen to doesn’t really sound like me so I wanted to change that. So I started learning guitar from instructional videos on YouTube and started working that into my music.

That shows a lot of commitment and patience and one that’s clearly paid off, giving you a unique edge to your music style.
So your debut album is due out later this summer. Does it have a name yet?

It’s a self-titled album. Cause it’s my first album, I thought that was more appropriate. My second album will have a certain mood and I’ll need a particular title to reflect that but for now, I thought it best to self-title it.

And it was co-produced by Neil Comber. What was it like working with him, as he’s worked with top artists such as Florence, MIA, 30 Seconds To Mars.

I was very lucky to work with Neil Comber. He knew what I wanted to do and let me at it and then offered advice on how to improve upon it technically. It’s very rare to find someone like that who has the confidence to let you go off and do your own thing, so I was very lucky.

In the past you’ve worked with people from Wretch 32, Ed Sheeran, Guy Chambers,
Wiley, Pro Green and Tiny Tempah whether it was recording, engineering or producing. Any collaborations on this album? Anyone you’d love to collaborate with further down the line?

No, there are no collaborations on this album. I have a lot of friends who I could have collaborated with, but I didn’t want to capitalise on that. I want to look back on that and think ‘Yeah that was all me’. I could easily do a song with Ed Sheeran but I don’t want people saying ‘You Know that Ed Sheeran song?’ but rather ‘You know that new Random Impulse track?’ Once I’m more established I’d be happy to jump on this. Working with my label, they were just happy for me to keep doing my thing. I think my music is more indie pop. I won’t deny my choruses are catchy but it comes from the heart, which is where all integral pop should come from.

Your new single ‘Best Party Ever’ is out on June 3rd and serves as the follow up to your previous two EP’s ‘Overload’ and ‘No Sleep For Winners’. I know you write your own music, lyrics, drum lines, guitar riffs and mix everything yourself, so how do you go about the creative process? Having that much creative input must give you a great sense of control and freedom.

I started out like a singer songwriter with my acoustic guitar and bit by bit, it just comes together when it’s all laid down. I start with a line, a chorus a melody and then flesh it out and build upon it. That’s where the singer songwriter part of me stops and I’m like ‘that lead guitar has to change here and this needs to sound bigger’. But yeah I think it’s important to be very involved from the beginning.

How did the idea for the video come about? It looked a lot of fun although I don’t know how you managed to work with all those hyper kids!

Paul Green said to me: ‘You never work with children or animals’. I didn’t know this rule! All I was worried about was that the kids wouldn’t be hyper enough, but as soon as we started filming, they were throwing popcorn about the place and going crazy.

Yes that’s the golden rule!
And your mum also made an appearance in the video?

Yeah she had a little cameo at the beginning. She’s a real stern character so there was no better person for the job really. At first she was too nice and I had to say to her ‘Mum you would not say it to me like that’. She’s even getting recognised in town now – even more so than me! Haha

Again you had a lot of input into the creative process and directed the video. Is this something you’d like to continue with on your next video?

I had a lot of fun directing this, but for my next single, I’ll be co-directing. It will be a lot more challenging so I’ll need someone to help me with it.

I love to perform ‘Pull Out All My Cards’. And also my next single ‘Lying To Myself’ is quite deep and reflective so I’m really looking forward to releasing that.

Over the years, you’ve received great support from Radio 1 and 1Xtra from Next Hype with Zane Lowe, Hot 20 for 2012 on 1Xtra, Freestyling with Westwood, in session for Huw Stephens and Rob Da Bank and most recently airplay from Phil and Alice. It must be great to have that level of support behind you.

It’s amazing – especially for someone at my level cause I’m still growing as an artist. I haven’t been out there for that long. They’re not concerned about how many twitter followers I have or anything like that. They’re just happy with what I’ve achieved so far which is a great confidence boost and to have that level of support behind me is just incredible – I’m very thankful.

You headlined the BBC introducing stage at last year’s Hackney festival. How did that feel?

BBC Introducing was amazing. I was on quite a small stage, but When Nicki Minaj was finished her set on the main stage, I saw the crowd come over my direction, so immediately I did a cover of The White Stripes ‘Fell In Love With Girl’ and suddenly a huge influx of people starting heading over to Introducing stage. By the end they were chanting ‘One More Tune’ but I wasn’t allowed. I was tempted to do another track, but didn’t want to push my luck.

Maybe next year you can chance it!
You’ve also toured with Ed, Rizzle Kicks, Gym Class Heroes, played at Bestival, V and headlined at Barfly in Camden. What’s been the most memorable place to perform?

My most memorable performance would have to be Wakestock last year. The weather was terrible – waterlogged everywhere and we were stuck in traffic for hours. We were ten minutes away and I was due to be on stage in 30 minutes. You’re meant to be there four hours before. I didn’t think I’d make it and the organisers said they’d have to go ahead without me. One of the sound guys knew me and was like ‘No way, Its Random Impulse, we have to wait for him’. I got there and ran on stage and shouted on the mic ‘I’m Random Impulse and I’m late!’ Then it must have been the adrenaline but everything just fell into place and the crowd loved it. Huw Stephens was there and he said that after my performance, he downloaded the EP straight away that’s how he started playing me. At the end of my set, I just lifted my guitar in the air and threw it on the ground. I knew I was buying a new one the following morning, so that was the only reason I did that. Haha

Wow, what a story. That’s definitely one you’ll remember for a long time!
What’s next for you? Any upcoming performances?

I’ll be at Koko’s on June 14th with Waylayers, Redfest on July 26th and then touring in October. I’m also running a series on YouTube called ‘Refix’ where I cover indie songs acoustically and then rap over it too. A lot of fans get confused cause they think my history is mainly hip hop only so I should let a band cover tracks like these. There’s a bout 30 videos online under my channel Jovel Walker.

Do you’ve any advice for any upcoming MC’s, musicians, producers, engineers, directors – You wear so many different hats these days you could give advice on all of them!

Haha, well I’d say don’t worry about charts or trends. Going back to the advice in that Jay Z documentary, make music that you enjoy and reflects you as an artist! Jack White is a great example of this. He re-interprets music that he loves to listen to.

I always ask this question but what are you listening to at the moment in your iPod or do you’ve any tips for new music?

‘Random Access Memories’ like the rest of the world. Jake Bugg, Queens of Stone Age is on repeat, Arctic Monkeys – Are you Mine, Jack White – Blunder Buss, new Drake material and James Blake.

For more information you can visit: http://randomimpulse.com/