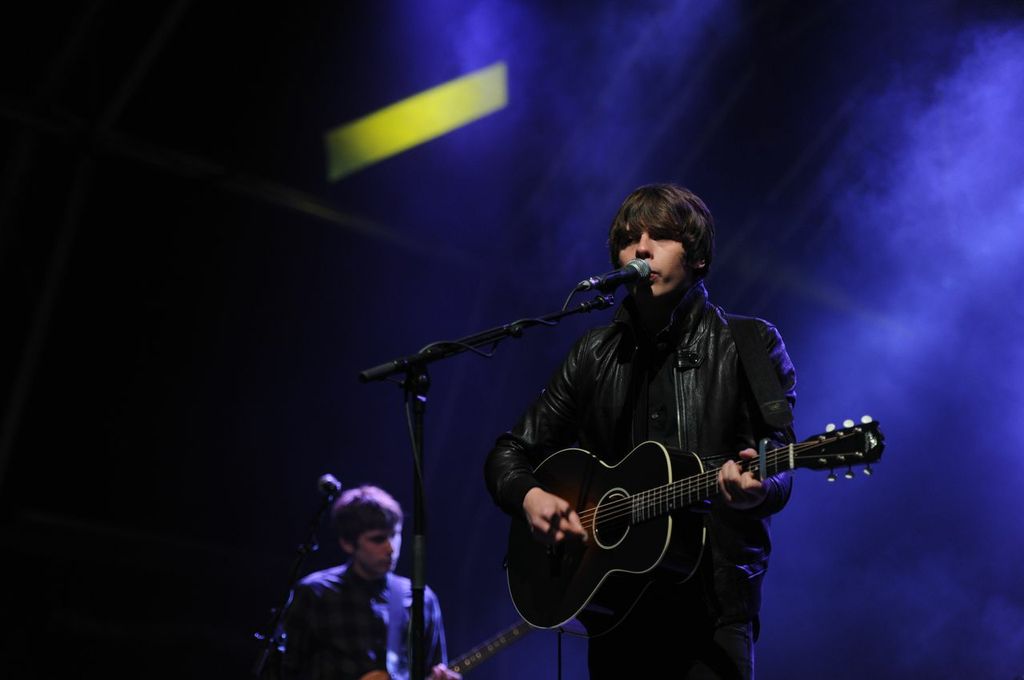 Boasting a healthy mix of local talent and marquee names, Splendour Festival returned this weekend on the grounds of Nottinghams Woolaton Hall. The triumphant homecoming of Jake Bugg was always going to grab the headlines but Splendour offers an excellent mix of bands, artists, food and stalls throughout the day. Things get moving early with future sound of Nottingham winners The Gorgeous Chans. The pulsing rhythms of Santiago (Tell Me What’s Wrong) is a particular highlight. Later on the main stage, Nina Nesbit shows off her unique brand of quirky guitar pop, Brit Summer is probably the standout track here and shows exactly why she’s had endorsements from the likes of Radio 1, Ed Sheeran and Example.

Dog Is Dead returned to Splendour for the fifth time to kick up a storm. Literally. Well, their fans do. A dust storm that is. The driving drums and angular guitars encourage the faithful in front of the main stage to destroy what’s left of the grass by way of a huge mosh pit. Had there been a roof Two Devils would have duly taken it off.

KT Tunstall is next up and has brought with her some superb new material from her latest album Invisible Empre//Crecesnt Moon. What is most impressive about the set is just how well the new stuff holds up against the big hits. Of course songs like Other Side Of The World get a hearty sing along, but on Made Of Glass and lead single Feel It All the Scottish songstress showcases a new found vulnerability and delicate touch. On Invisible Empire itself KT displays a captivating lyrical prowess to compliment her eternally rich vocal. Black Horse and the Cherry Tree usually steals the show and today is no different. Armed with her trusty loop pedal Tunstall builds layer upon layer of hand claps, tambourine, acoustic guitar and vocals before reaching a dizzying crescendo and working the now sizeable main stage crowd into a frenzy. Oh and ask anyone in attendance and they’ll say you’ve not heard a Seven Nation Army mash up till you’ve heard a kazoo belting out that famous riff.

Over on the Jagermeister stage Peter Hook And The Light draw a massive crowd for some Joy Division and New Order classics and don’t disappoint. Love Will Tear Us Apart – tick. True Faith – tick. Blue Monday – tick. Job done.

It’s time for a wander to take in Splendours lovely, chilled out vibe. Having experienced the horrors of V festival last year (and with more and more festivals being populated by needlessly aggressive vest wearing, chest waxing, tragic H&M casualties) we can happily report that this is not the case at Splendour. Perhaps it’s the pleasant surroundings or the fact that the headline act is refreshingly authentic, but the eclectic mix of young and old get along swimmingly. Oh and Big Chess helps too!

As the temperature drops a little, it’s a quick dash back over to the Jagermeister stage where Geordie rockers Maximo Park are headlining. An ideal festival band in many ways, the majority of the set is urgent and to the point. Even if the casual punter isn’t fully aware of Maximo Parks impressive back catalogue you can’t help but be won over. All scissor kicks and quick-fire hand chops, Paul Smiths infectious on stage persona energises the appreciative crowd. The National Health and Girls who play Guitar rattle along nicely whilst Our Velocity and Apply Some Pressure sound as good as ever and are met with rapturous applause.

Fresh from a Pyramid Stage Glastonbury slot and an enormous Hyde Park gig supporting the Rolling Stones, Jake Bugg returns to Nottingham the conquering hero. This was always going to go well but as he nonchalantly works his way through the set it becomes apparent just how well Buggs debut has been received. An unkown two years ago, now almost every song is sung back by the crowd with fervent appreciation. On Taste It, Troubled Town and Two Fingers people know every word. It feels like a greatest hits set!

The most striking part of the evening is in the acoustic section of the show. Occasionally when an artist leaves the comfort of a full band set up in favour of a more intimate approach, the cracks can begin to show. Some artists need the smoke and mirrors – a driving kick drum and some distorted guitar trickery can transform a mediocre song into a great one. This is certainly not the case with Jake Bugg. With only the acoustic guitar and the songs to offer, he shines. A beautiful trilogy of Country Song, Someone Told Me and Broken show that the boy from Clifton has developed into a world class performer.

The festival comes to a close with a one two punch of Neil Young’s Hey Hey My My and an electrifying rendition on Lightening Bolt. As the thousands trudge happily out of the site babbling excitedly with admiration for their favourite son, one thinks that Splendour could do a lot worse than having him back next year.