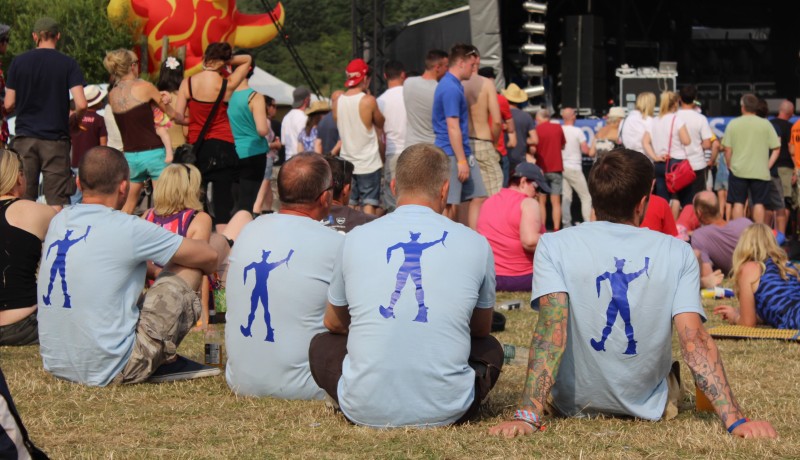 After the longest hot dry spell in Scotland in years, heavy rain, thunder and lightning were forecast for the 12th, and first ever sold out, Wickerman festival in Dundrennan, Dumfriesshire. Thankfully the sun gods answered everyone’s prayers as the promised showers never appeared until after midnight Saturday, and everyone basked in the glorious sunshine all weekend.

The Wickerman always boasts a strong and eclectic line up and this year was no different. Fresh from their Glastonbury appearance, man of the moment Nile Rodgers and his band Chic – possibly the best disco act of all time, were greeted warmly for their Friday evening slot on the Summer Isle stage. They burst on the stage with Everybody Dance and the crowd obliged and never stopped for their hour long set. The band fitted in a surprising number of both Chic and Rodgers penned hits, reminding everyone they are no covers band – this is the man that wrote Sister Sledge’s We are Family’ and Diana Ross’s ‘I’m Coming Out’. Their non-stop disco party was the absolute musical highlight of the weekend.

Local Dumfries band Barstow Bats had won the competition to open the main stage on the Saturday, and didn’t disappoint. They have only been formed six months and their guitar driven indie pop sounded like a mix of The View and Artic Monkeys. Their half hour slot didn’t seem long enough and we are sure these guys are destined for bigger things.

Saturday’s line-up included festival stalwarts Dreadzone, who are celebrating their 20th anniversary this year. They must have won over legions of new fans as their unique blend of high energy dub, reggae and trance had everyone dancing non-stop. The band perform a mixture of new material and back catalogue, but the real show-stopper is the band’s biggest hit Little Britain which was the high energy tune that brought the dancing to a crescendo.

Indie rock giants The Enemy blew everyone away on Saturday night with their tight set and front man Tom Clarke whipped the crowd into a frenzy with hits such as ‘You’re Not Alone’ and ‘Away From Here’. They may be rather annoying in the press, with their passé swaggering posturing, but onstage, they have enough energy and enthusiasm to

There are a number of different stages, catering for all musical tastes, including an acoustic village and The Solus tent has built a reputation as one of the best places to see up and coming Scottish talent. This year appearances from emerging bands such as Glasgow’s Fake Major, whose indie-folk blend of guitars, piano, great lyrics and twin vocalists mean this was a standout set from the newly formed band who will be a force to be reckoned with in the future.

The Skooter tent was jam-packed all festival, creating a sweat box in the humid heat. Scottish ska heroes, the Amphetameanies played a high energy set, getting the crowd of all ages skanking, jumping, laughing and singing along. Bass-player Gordon Alexander Davidson’s astoundingly catchy rifts created one amazing giant ska party.

Wickerman is about so much more than the music and the laid back, off-beat atmosphere of this family festival proves year after year that it is possible to get the big name acts and still retain an atmosphere where you can keep the kids out until after dark and still feel secure.

As our first Wickerman camping experience with two toddlers, we were extremely pleased to find you don’t need to keep haemorrhaging money to keep the kids entertained. There were free bouncy castles and football on offer and within the Kids’ Field circus workshops, clowns and sing-alongs meant the children were never bored. Big kids are also well catered for, with activities such as Segway and rodeo bull riding, dance workshops, yoga and festival golf all available on-site.