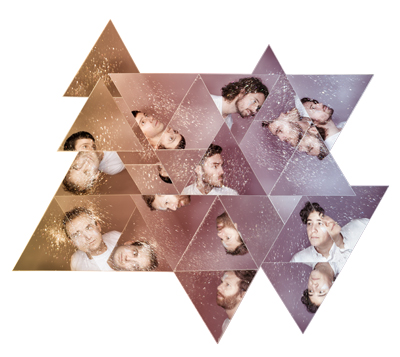 Canadians Top Less are making a big noise in the land of the maple leaf, and the band’s debut album Top Less Gay Love Tekno Party will soon be released over here.

We caught up with Mike Schindler from the band via the magic of transatlantic electronic communication (ok, e-mail) and he answered out questions about Top Less, their music and their celebrated live shows

Tell us a bit about how you guys came together as a band. I believe you formed while in Scotland but are now based back home in Canada?

Donne and I went to the same uni, where we played music together. When we finished we decided to move to Glasgow, because of what seemed like a more fruitful music and art scene there. We wrote of the songs on the album there while living in a flat in Glasgow’s West End. Donne then moved to Toronto and I stayed in Glasgow for some time until we both found each other back in Vancouver. Here we assembled the rest of the band through friends and Craigslist close encounter adds. Voila… here we are.

And how would you describe your music?

Your first single Robin got some good reviews – I saw it described as a song about sex and Berlin. Is that accurate?

I guess so. Its mostly about Berlin being a sort of oasis in the desert that is your early twenties. The song explores the angst of sex, being young, and the confusion of not really knowing where home is. The song is about a German man who is an inspiration to me, and was a huge teacher to me about love, life and sexuality at a time when all seems quite blurry.

We featured your new single Danger Love recently – nice song. What can you tell us about it?

Danger Love is love that is not equally reciprocated. Thats not to say that the relationship is loveless or empty, but just that our feelings are not matched quite the same way by our other. Often the relationship drags on creating a shitty power structure where person A is constantly struggling for person B’s affection. It fucking sucks for the most part – but this is something I think everyone deals with at least once.

As for the song itself, it was our first song we finished on the record, and our first time working with Hannah Epperson and her brother Nick Epperson, who played the strings. They’re friends of ours and amazing little music magic people.

And your debut album Top Less Gay Love Tekno Party will soon be out too. What can we expect from the album?

The album is conceptually an extension of our live show in that it encapsulates all the crazy glitter, dancing, partying, freedom love parade feeling of our live show. However, we didn’t want the actual sound of the album to be limited to how we play live. So its got loads of fun synth sounds and tonnes of action throughout. Its a magic sexy party album.

Would you describe yourself as a political band, one making a statement?

We didn’t start the band with the intention of making a statement. We started the band in order to make music that is fun, makes people feel, and allows people to be free to be themselves in whatever form they’re comfortable with. I don’t feel like this should be seen as political, it should be the norm. It is the norm for us.

I hear your live shows are quite spectacular. Will we see you touring in the UK soon?

Thanks. We take a lot of pride in giving the audience a spectacle. Our shows are aimed at allowing people a few hours to totally freak out and feel like they’re part of a circus.
We would love to come to the UK for a tour soon. Nothing planned yet but hoping for early next year.

And what happens next for Top Less?

We re writing a lot of really great music and recording as we go, so hopefully another album out soon and lots of touring in the Autumn and New Year. We re also trying to get onto this Mission to Mars reality TV show slotted to start production in the next couple years. I think we have a pretty good chance to get on it.

Thanks to Mike for his time. For more Top Less news, music and videos check out their web site at http://www.toplessgaylove.ca/