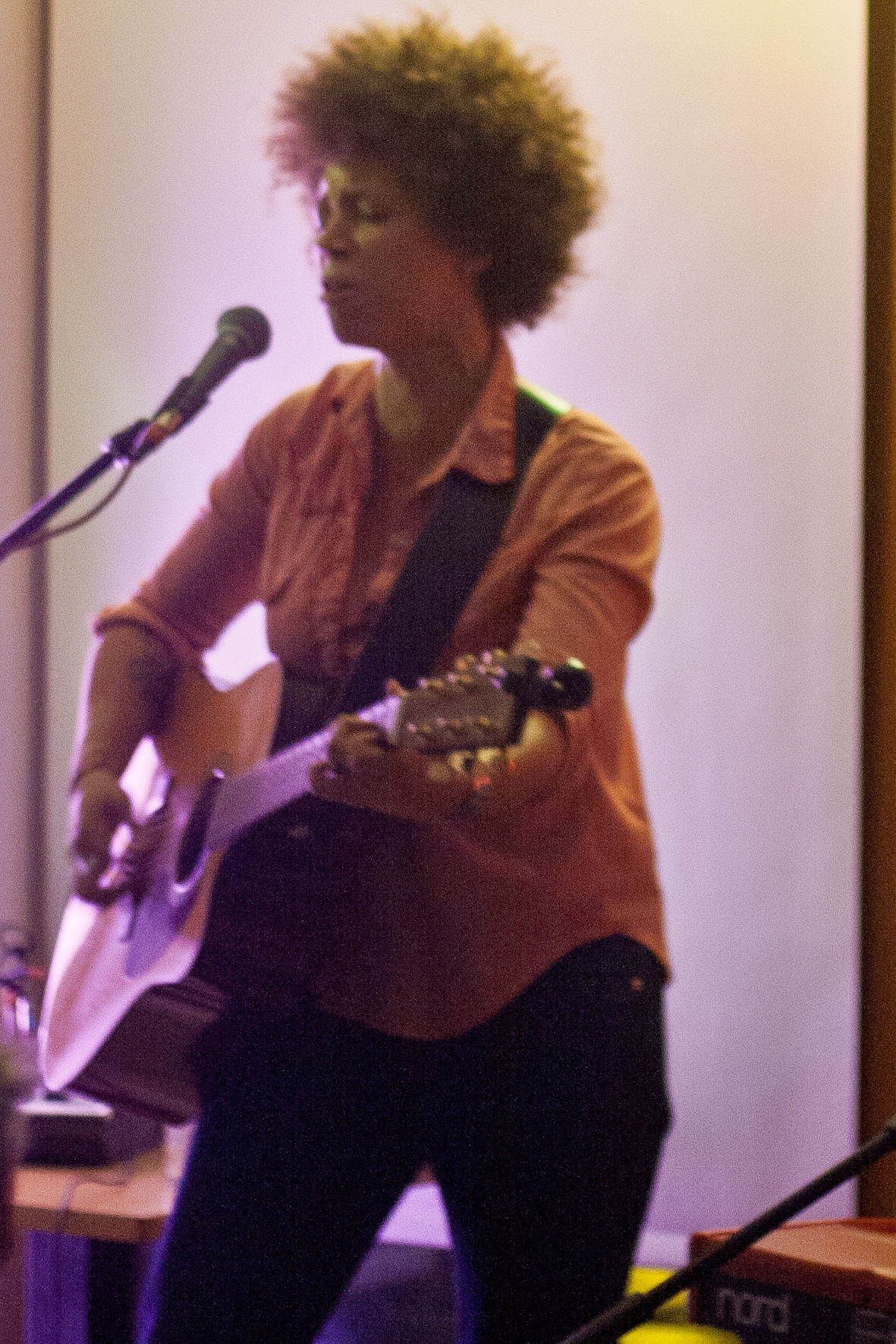 Chastity Brown brought her UK tour north last night, playing her first show in Glasgow, and leaving a sold out crowd in awe of her wonderfully smoky and sweet soul voice. Brown was a long way from her home in Tennessee, but her songs of travel and magic, love and hard times, clearly stuck a chord with an enthusiastic Scottish audience.

The venue was a new one to me: a rather nice clubhouse room in the west end of the city that is putting on a fair few shows these days. The acoustics were good, even with over 100 people packed into a fairly small space, although the lighting was a bit too red for the photographers in the audience.

But the intimate atmosphere with the crowd so close appeared to suit Chastity Brown perfectly. She seemed at home right away, chatting easily between songs and showing a relaxed stage presence. Playing acoustic guitar and backed by excellent keyboardist deVon Gray, it was her quite beautiful voice that dominated a fine night of soulful music. Brown described her music as folk, and it clearly comes from the storytelling tradition of the American south. But there are clear soul and blues influences and touches of country too in her songwriting.

Brown played two sets with a break in between. Kicking off the night with two tracks from her most recent album, Back-Road Highways, she hit top form immediately. A slowed down version of Leroy was heard in silence, the audience enraptured by her delicate phrasing, occasional bursts of vocal power and great range. Chastity Brown has the type of voice that is perfectly suited to slower tracks and she puts so much emotion into her delivery, living rather than singing the songs, that the audience can’t help but to respond.

Moving to older songs, Brown played the track Back-Road Highway, which actually came from her previous album. Slow and gentle this tale of taking the road less travelled was a real standout. New songs were played too and Cross The Sunny, a lovely track, high on emotional intensity, ended the initial 45 minute set.

Chastity Brown and deVon Gray were soon back for a second, slightly more upbeat set. After You, written on the banjo but played here on guitar, had a jaunty country feel and the audience clapped along with little encouragement. The powerful Man And Gun was another highlight, a beautiful sad song delivered with real feeling. And the piano ballad Let It Go saw Brown take to the keyboard to deliver a humorous tale of her Van Morrision obsession with real style.

A lovely cover of Ain’t No Sunshine and one final singalong with the enthusiastic crown by now all keen to join in closed the night. The tremendous applause made an encore inevitable and the bluesy If You Left Me, the closing track from her current album, was the perfect end to a lovely night of music.

Chastity Brown is a fine songwriter and showed with this superbly moving performance that she can replicate the high quality of her recorded material on a stage. The small room suited her style well and she made many friends among an audience that appreciated both her intensity and the sheer beauty of her voice.