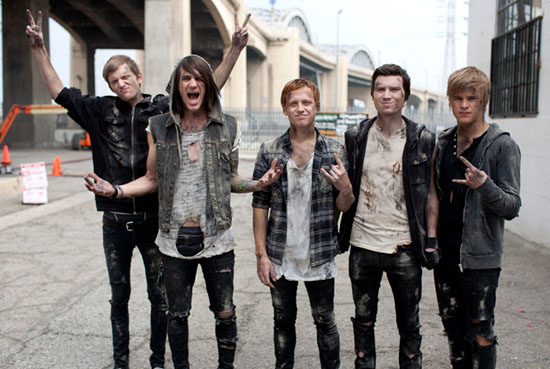 This was the first time we’d seen Blessthefall after the release of their new record and, as we’ve previously said, as a band, they had never really stood out amongst the tonne of other metalcore bands in their scene – at least until they dropped Hollow Bodies – so naturally, we didn’t really know what to expect of them.

Regardless, the current popularity of metalcore couldn’t be more obvious, however, their gig at the Underworld proved exactly why it is. Long before doors were even open, there was a hoard of young fans that were filled the streets of Camden with their anticipation, which meant that the venue was near capacity even for the first support – which made a refreshing change.

London based rockers Despite My Deepest Fear took to the stage first. Filled with brutally heavy riffs and plenty of angry breakdowns, they definitely set a pretty high standard for the rest of the night. This was, of course, no worry for Raw Power’s newest talent Cytota. Defined as ‘melodic metalcore’, they mixed just the right amounts of heavy metalcore beats and punk-pop-like-choruses providing the perfect marriage of mosh and sing-along. In terms of new and catchy metalcore bands, this lot are good fun, give an enjoyable performance and undoubtedly will have great things coming their way in the near future. Oceans Ate Alaska followed shortly after – they showed both great professionalism and musicianship with their unique-yet-captivating live sound.

Finally, after much anticipation – Blessthefall took the stage. Beau Bokan’s presence as frontman was immediately felt as he took control of the night. Instantly, it was evident that they were a massive step up from the others, pushing their performance both physically and musically to a whole different level. Opening with one of the best tracks from Hollow Bodies “You Wear A Crown But You’re No King”, it was obvious that they were about to play a stellar set; and by the second song, Beau had already taken to the crowd. Not only did they play continuous hits all the way through, they also managed to stay consistently tight, sounding as intense and powerful as they did in their last song as they did in their first. Just when everyone was just about ready to head home, they returned for an encore ending on “Hey Baby Here’s That Song You Wanted” which absolutely tore the room apart with energy.

One thing is for sure, we came out converted fans. Blessthefall have proved that not only do they stand out amongst their fellow metalcore bands; they’re also easily one of the best about right now.