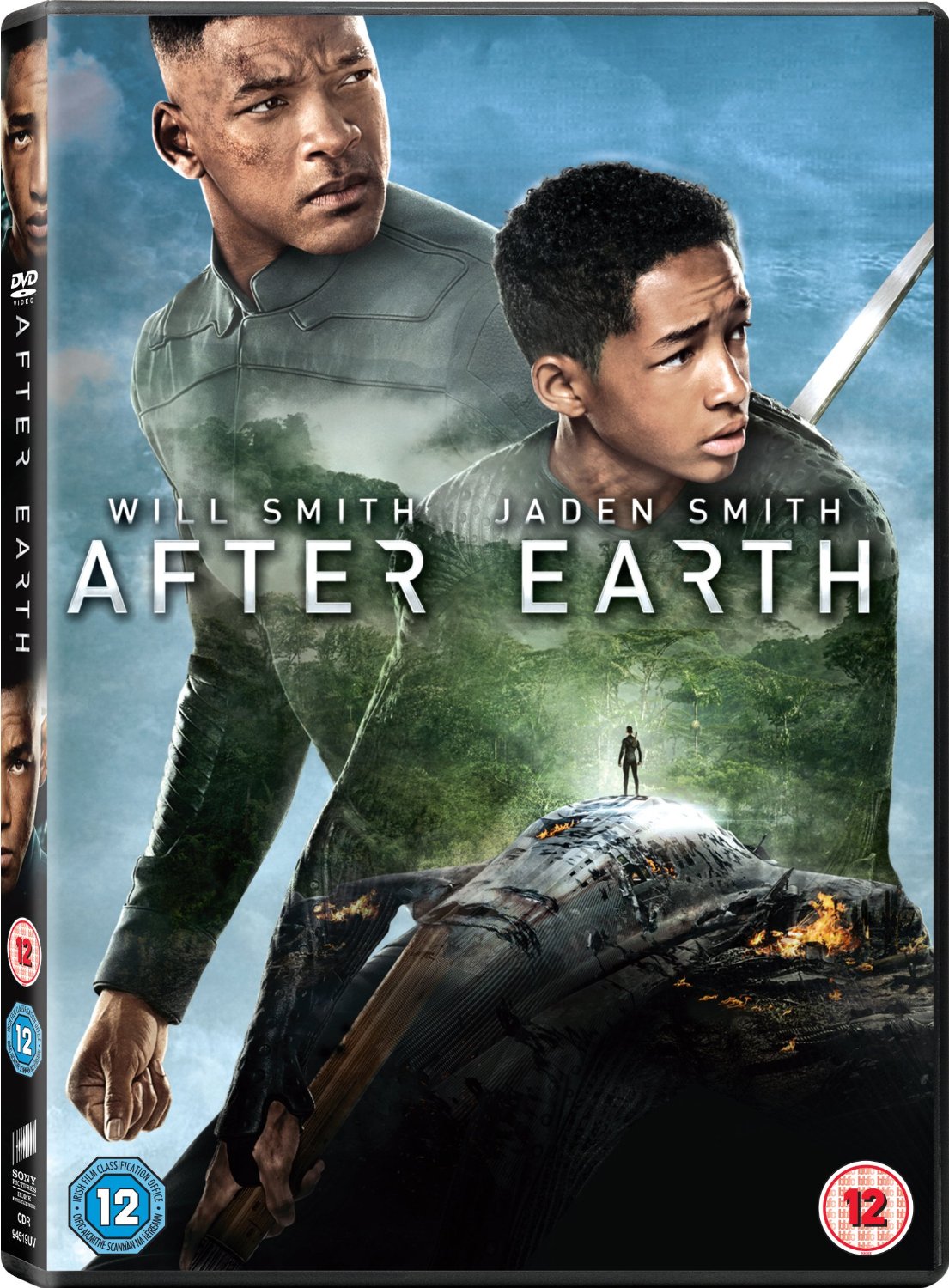 From the mind of M. Night Shyamalan…..oh no wait, he doesn’t have the hubris to say that anymore.

From M. Night Shyamalan, and Will Smith, comes one of 2013’s seemingly myriad big budget sci-fi blockbusters, that didn’t so much bust those blocks, as sort of gently lean up against them in a somewhat less than wholly convincing manner, and tickle them with a feather duster.

Starring Will Smith, and real life son Jaden; After Earth takes us a thousand years into the future, and Earth is, for humankind at least, now nothing but a distant memory. Everyone lives on new found home planet Nova Prime. This exodus from Earth was propelled both by humankind’s destruction of the planet’s resources, and the (seemingly) resultant, rapacious evolution of deadly flora and fauna making it totally inhospitable.

This is of course a DVD review, and is consequently ‘not’ trying to be 100% spoiler free, however we will keep things at least a little vague in terms of plot details.

Smith and Smith play (no surprises here), father and son, with Smith senior being a top ‘Ranger’ (a group of highly trained warriors). These rangers have learned to completely suppress their fear reflex, thus rendering them invisible (they call it ‘Ghosting’), to the fear sensing ‘Ursa’ (horrific beasts sent specifically to kill humans, by otherwise unseen aliens who also want to settle on Nova Prime).

Stay with me here.

Smith junior, has just flunked final assessment of Ranger training, due to his inability to translate fantastic ‘classroom’ ability to ‘in the field’ effectiveness. Most significantly, he carries a massive amount of emotional baggage, and has not yet learned to ‘Ghost’. Consequently, he cannot be allowed to become a qualified ranger, and feels a failure in his father’s eyes.

So, after a less than successful reunion at home; messieurs Smith embark on a final training mission (junior tagging along ostensibly to bond with dad), and events conspire to strand them on (you guessed it), Earth. Who’d have thunk it?! Smith senior is incapacitated, and Smith junior has to venture out into the unforgiving wilderness in order to find, and fire a distress beacon, so they can both be rescued. Oh by the way, the beacon is of course a considerable distance away (but not the other side of the planet), within the tail end of the ship, which broke off during the crash. Complicating the already difficult task of surviving Earth’s considerable natural dangers; is the presence of an Ursa, that may or may not have escaped it’s cage in the tail end of the ship (it was being transported to be part of the training mission).

Smith junior has to overcome his fears, and find the strength and resourcefulness to save both himself and his father. Action and adventure ensues, and we follow the progression of both the literal journey, as well as the metaphorical one.

The Ranger mantra goes: Danger is very real, but fear is a choice. Well, yes.

OK, so the premise is actually rather interesting, and in places the execution is well handled by Smith, Smith and Shayamalan. However, the plot necessitates Will Smith’s ranger to be so completely immobilised, that once on Earth; all of the man’s scenes are with him sat prone on the control deck of the wrecked ship, directing junior’s efforts via some natty communications tech. He never moves. This leaves Jaden Smith carrying the meat and potatoes of the movie on his slender shoulders. To be frank; I’m not sure he was ready for such a task. Good sci-fi, by its very design, requires the utmost commitment and verisimilitude from both its producers, and performers alike. Jaden’s presence is sometimes a little too shaky and inexperienced to convince the audience of the reality of the situation.

This comes in juxtaposition to the fact that the aforementioned Smith senior’s best acting chops (namely, his wit, charm and comedy), are wholly inappropriate and kept 100% locked down, and nowhere to be seen here. This renders Smith senior an almost completely inert mass, impenetrable, and impossible to like. Ironically, the story dictates that Jaden’s character learn how to be exactly the same. Herein lies possibly one of the movie’s most fundamental flaws, i.e. it fails to exploit the best characteristics of its star.

Taking a step back, and activating one’s logical brain; the movie leaks plot water in a way that is several gallons per second more leaky than the average popcorn sci-fi tale. There’s even a colossal continuity error where Jaden loses his ‘Cutlass’ (the Ranger multi-tool/weapon), literally between cuts. One moment, he has it, the next; it’s gone….and it stays gone. The environment created in the movie also seems a whole lot less terrifying and inhospitable than we are initially led to believe when they first land. It’s definitely an odd dynamic.

However, the film is not without its charms, and for what it’s worth; was more enjoyable on the re-watch, than first time round. That continuity error is a major clanger though, and I’d love to hear what the hell happened.

The DVD features a very light smattering of extras, and in all honesty; they are barely worth the bother. For what it’s worth however, here are the details:

A Father’s Legacy – 8.5 minute documentary, on set with Will and Jaden Smith. The most amazing thing about this short featurette; is that it displays a very large dose of the kind of fun, easy, likeable father son japery and good feeling, that’s entirely absent from the actual film.

A Thousand Years in 300 Seconds – 5 minute montage of on set footage, no dialogue/commentary

The Nature of the Future – 5 minute montage of locations, scenery and natural world creatures, no dialogue/commentary

Now, of course the business of bonus features comes up every time with DVD and Blu-Ray reviews, and they are either important or insignificant depending on the individual point of view of the customer. In the case of After Earth; it may have been better to go with a vanilla plain release, instead of barely twenty minutes of content (over half of which is entirely without dialogue). It’s also worth noting that the Blu-Ray release is similarly under-endowed in the bonus features department, adding only a few exclusive additional bits and bobs to the DVD’s tally. It’s a struggle to understand the marketing meanness of this ‘DVD is the poor relation’ kind of thing. I’m sure Blu-Ray sales would not be the slightest bit effected if both editions had been furnished with all of the features. There’s certainly no shortage of disc room.

As a further thought on this; It’s worth noting that any $130 million dollar movie will have all manner of supplementary material created around it, in advance of the film’s release. It really is a mystery why so little of this material has been bestowed upon either the DVD or Blu-ray packages. It is something that can often be a reaction to a movie’s box office performance, however the marketing strategy of it is a mystery. As already alluded to; standard definition DVD is often underserved in this department anyway these days; which is quite unfair to non-adopters of the new format of course.

Despite an admittedly, luke warm critical reception, and only a moderately profitable theatrical return, After Earth could still find a bigger audience through its home media releases. Although it’s very very flawed; I would like the bean counters to have had the courage of their convictions, and furnished the film with a much more confident extras package. Perhaps we will see this at some point later on.