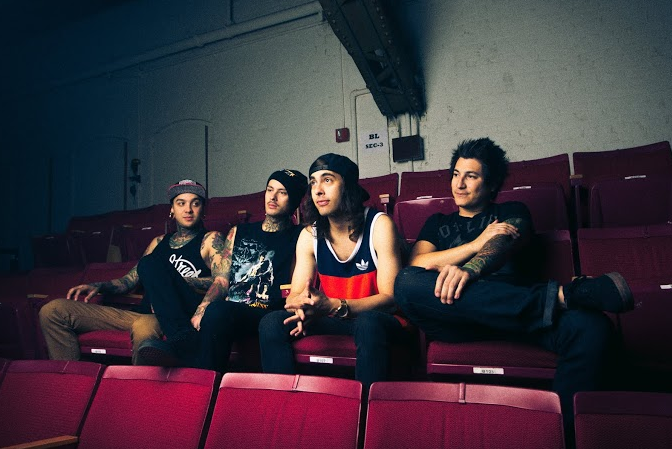 Rock’s favourite San Diego residents, Pierce The Veil are excited to announce a re-release of their outstanding album ‘Collide The Sky’ complete with brand new DVD ‘This Is A Wasteland’ on 25th November via Fearless Records. Artwork and a trailer for the DVD can be seen at http://piercetheveil.net/thisisawasteland

The DVD is an hour long documentary which follows the band over the last year of global touring, gaining access to highs and lows, behind the scenes and never seen before footage. It will also include ‘A King For A Day’, ‘Bulls In The Bronx’ and ‘Hell Above’ which have clocked up over 23 million views online between them. The documentary will be available to purchase digitally on iTunes, DVD and in a deluxe edition bundled with the album and includes 32 page booklet with exclusive shots of the band, original illustrations from the albums artwork design, notes and a personal message from the band.

“Our first world tour was absolutely the craziest experience of our lives.. and we filmed EVERYTHING! Follow along as we visit uncharted territories in search of the best shows and thrilling experiences we could find along the way. This DVD is for the fans and the fans only. Thank you for letting us travel the world and share this adventure with you!” – Vic, Mike, Tony, and Jaime

Pierce The Veil will be heading back to the UK in support of Bring Me The Horizon for their whole UK tour.

“My prediction is that touring Europe / UK with our best friends is going to be insanity every single night! Our last trip of shows over there made for some of some of the craziest and most entertaining nights we have ever had on stage as a band, and we’ve been counting down the days till this next tour. It is also a real honor to share the stage with BMTH in their home country, as well as play for our amazing fans across Europe and even a few other cities we’ve never ventured before. We’ll be hitting the stage with a full production as well as new songs that the UK and Europe have never heard us play live before. So pumped for this tour and can’t wait to see all of our fans’ faces again.” says Vic Fuentes