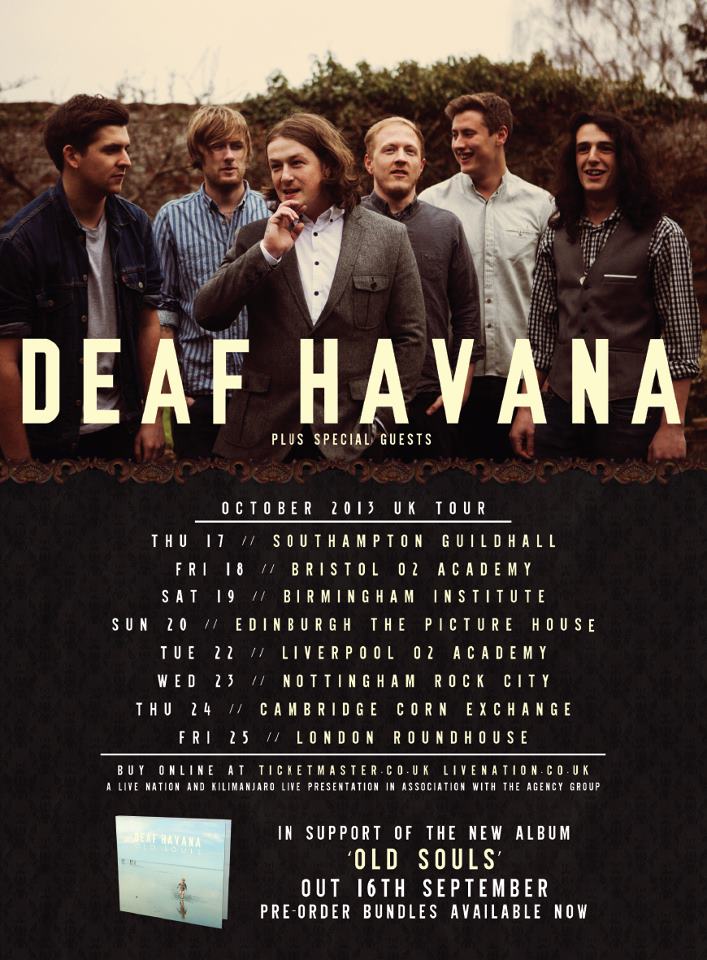 The intimate and grandiose atmosphere of The Roundhouse, London, is not a destination that you would imagine the 2009 incarnation of Deaf Havana to be headlining, never mind sell out. But with the direction that the 6 piece have thrusted themselves into these past few years, they have all but let go of their screamo past and are now a band who have made it as they wish.

Opening act Big Sixes were the perfect opener and relished the chance to play in the Roundhouse, while Charlie Simpson’s attention to detail was lapped up as ever. The young pilgrim played a host of ballads that the crowd loved, and brought his unique energy to the venue.

But tonight was all about Deaf Havana, and as the stepped onto the stage and burst straight into ‘Boston Square’, it was easy to see how much they looked forward to tonight just as much as the crowd. Frontman James Veck-Gilodi has emerged as one of the most prominent and well respected, just for being a nice guy, which is everything he deserves.

He and his band whipped through tracks from their last 2 efforts, with certain highlights including ‘Saved’, ‘Mildred’ and ‘Everybody’s Dancing’ from their latest record Old Souls. A cover of The Cure’s ‘Friday I’m In Love’ made an appearance to the delight of many, as Veck-Gilodi roared at the crowd that “it’s nights like these that make everything worthwhile”.

Probably the band’s shining moment came in their track ‘Hunstanton Pier’ from their Fools And Worthless Liars album, while other honourable mentions from this record being ‘Little White Lies’ and ‘Leeches’, while their post-encore set of ‘Mostly I’m A Bore’ and set closer ‘Fifty Four’, the near-acoustic ballad of arena proportions.

Before finishing their set, Veck-Gilodi again thanked the crowd more than he needed to, thanking them for allowing the band to make such an appearance and for sticking by them. He announced that at one point, their band had been a laughing stock of the industry, that no one believed in them and many tried to change them.

Now, Deaf Havana are on the verge of becoming bigger than anyone could have imagined, and this is again testament to their work. The product shows how much effort this has taken, and it shows the talent that this band really do hold. Deaf Havana are the band who made it as a band, which is a welcome change in the industry today.