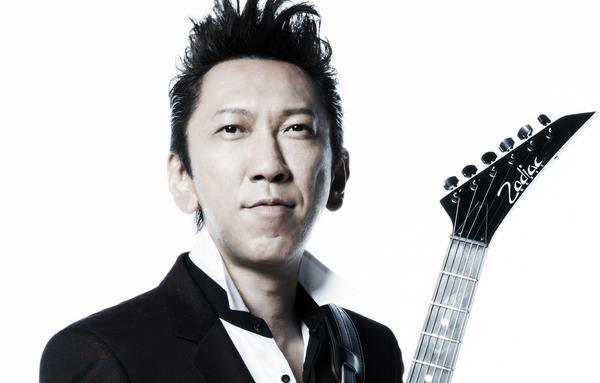 This Saturday, Japanese guitar legend Hotei will perform a special, one-off show at the Shepherd’s Bush Empire featuring members of Roxy Music and Jesus Jones, with David Bowie’s drummer thrown in for good measure. If you’re not sure who Hotei is, don’t worry, neither were we until two weeks ago. He’s one of the biggest musical forces in Japanese history, having worked with Janis Joplin, Bowie, INXS, Blondie, and crafted the soundtracks for Kill Bill and Fear & Loathing in Las Vegas among other many, varied projects. His show on Saturday also features, we’re told, a one of a kind audio-visual display, so best strap yourself in. Ahead of the performance we caught up with the man himself for a few words.

Glasswerk: Firstly, what brings you to England? Why did you decide to move here?

I’ve spent a lot of time in London since the early 90s, epecially for recording, and London has always been a city close to my heart. I was really inspired by London and by British artists when I was young and just getting into music. Looking back on my career, I’ve experienced a lot in the past 30 years, and I’m really grateful for the success I’ve had in Japan. But at the same time I always want to continue challenging myself. I really believe that no matter how old you are, you should never give up on your dreams. Ever since I was a teenager, it’s been my dream to play aorund the world, and although I’ve played overseas in the past, off and on, I really want to push to the next level. I see this next phase of my life as a fresh start and am really excited about it.

London is such a diverse and inspiring city, with such an incredible mixture of cultures and people, and I feel really free here. It’s very different for me compared to Tokyo, where I stand out and people tend to recognize me, so I feel sort of invisible and a bit restricted there. In London no one recognises me, so I can just enjoy myself walking around the city, taking the bus and subway, going to cafes. It’s great. Really a new chapter for me.

Glasswerk: Your live band includes members of Roxy Music, Jesus Jones and David Bowie’s recording band. How did all of these people come together?

Yes, I’m really excited about my next show, and to be playing together with so many wonderful friends. It’s been an honor and a great experience to work with so many excellent musicians throughout my career, and I’m really grateful for the amazing friendships that have resulted. Andy Mackay and Mike Edwards are old friends of mine and I’ve collaborated with both of them in the past. I played with Roxy Music most recently at Fuji Rock Festival a few years ago, and I did a tour together with Jesus Jones as well. I’m really glad to see them in London and to have the chance to play together again. Zachary Alford is the drummer on David Bowie’s new album The Next Day, and is featured in the music video as well. He’s been playing drums for Bowie since the 90s, back at the time when I played a show together with Bowie, and we became friends at the time. Zack’s toured with me several times over the years, and is coming over from NY to play for the London show.

Glasswerk: You’ve famously got some big British influences, but what aspects of Japan do you want to bring to the UK?

When I was living in Japan, to be honest I didn’t really have much awareness of myself as Japanese, but now, living in such a culturally diverse place as London, it’s made me think much more about what it is within me that is truly Japanese. As my generation grew up with a lot of musical influence from the West, I don’t think of my musical style as having any traditional Japanese roots in the sense that people might expect. I also feel it’s a bit dangerous and misguided to place too much attention on the world of manga and anime. Separately from music alone, I hope to incorporate and communicate a more comprehensive artistic approach, with focus on elements like fashion and art.

Glasswerk: How did ‘Battle’ come to be on Kill Bill, and what was it like collaborating with Quentin Tarantino?

‘Battle Without Honor or Humanity’ is an original song that I composed for a Japanese gangster movie. Tarantino apparently saw the film, and then got in touch with my office, asking to use the song for his film Kill Bill. I really love Tarantino’s work and his rock ‘n’ roll style, so I was really happy to get the offer from him. I definitely have to thank Tarantino for this, as the song has become so well recognised around the world and it’s also been used in lots of TV commercials, TV programs, video games, and events around the world. It really amazes me how I can travel anywhere in the world, and it seems that people know this song. I’m sure most people don’t know my name, and that it’s my original song, but I’m still glad that they appreciate my music. And this gives me more of a challenge for the future!

Glasswerk: Do you have any surprises planned for the show you’d like to tell us about? What should we look forward to the most?

My show at Shepherd’s Bush Empire on November 9th will be a really special one. I want to create something unique, combining music, art, and fashion, and we’re going to have a really fantastic visual show. I’ve been working with some of Japan’s top young creators, and we’re using a special technique to project images onto a series of screens, producing a very cool and avant-garde expression of classical Japanese art and beauty. I’m also collaborating with Yohji Yamamoto, one of Japan’s top fashion designers, who is specially designing my stage attire for the show. It’s going to be a great night. I hope to see you there!

Tickets for HOTEI’s groundbreaking London show are on sale now from here.